Why TIME Dedicated an Issue to the Global Climate Fight

In 1989, when TIME chose The Endangered Earth as Planet of the Year, in lieu of the usual Person of the Year, the critics pounced. The article itself quoted a University of California scientist who called the greenhouse effect “the laugh of the century.” One reader wrote that the contents of the article “are an excellent example of the solid waste problem.” The skeptics piled in again 30 years later, when I opened a 2019 special climate issue commemorating the Endangered Earth by simply stating that the scientific fact of global warming is settled and that there isn’t another side.

Today, as 20,000 delegates from 196 countries head to Glasgow for the most important global gathering on climate change in years, it’s easy to be cynical about the world’s commitment to addressing its existential crisis. President Xi Jinping of China, which recently announced plans for 43 new coal-fired power plants, as well as leaders of some nations that have shown the most hesitancy for change, including Brazil, Mexico and Russia, are skipping the conference. Global emissions levels, after seeing rare declines during the pandemic, are on the rise again. Many of the promises made at COP21 in Paris, the last major global climate summit, have been broken.

And yet there has been considerable progress over the past couple of years. Before COP21 in 2015, the world was on track to be more than 4°C hotter by the end of this century than at the dawn of the industrial era; that number has since come down to just under 3°C—still twice what is sustainable, but real progress. And there is, more than ever, a shared understanding of the reality we face. More than 99.9% of peer-reviewed scientific papers attribute climate change primarily to humans, according to a new Cornell University review of nearly 90,000 studies. After a year of unprecedented droughts, fires, floods and storms, climate change has emerged as the dominant issue of our time. You can see it in the resolute shift in investor priorities toward a carbon-free future; in the deluge of money into much-needed innovation toward clean energy and carbon sequestration; and increasingly in the policy discussions of the world’s biggest economies. “Climate change seems finally to be taking the central role in public discourse that it should have been holding for decades,” says science editorial director Elijah Wolfson, who oversaw this issue. “The global response to climate change is now the underlying framework for everything else that society debates.”

The four covers for our editions around the globe capture different pathways we must take to make further progress. John Kerry, profiled by Justin Worland, is undertaking a late-career act as Joe Biden’s climate czar to return the U.S. to global leadership in these efforts. Linda Zhang, the Ford engineer who has electrified the most popular truck in America, shows the promise of technological innovation. Vanessa Nakate, the 24-year-old Ugandan climate activist, calls for listening to the voices of others like her. And the painter Tim O’Brien, who has illustrated more TIME covers than any artist in recent history, highlights the importance of global collaboration at COP26 itself. “Nothing globally is more urgent than nations dealing with climate change,” says O’Brien, who notes that he added the empty chairs to reflect what is not being done. “The uninvited guest is how we all should see climate change, that it will drastically alter our comfort and future if not addressed.” 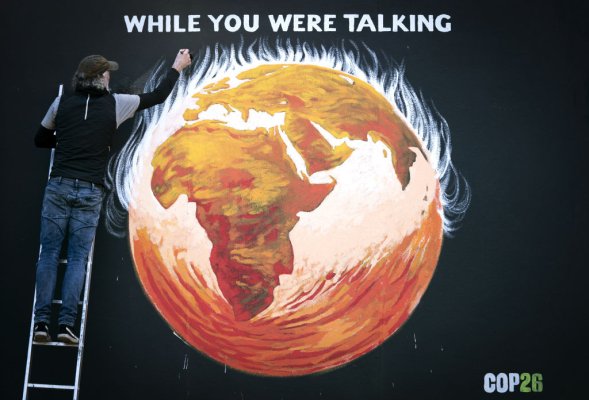 Here Are the Goals of the COP26 Climate Change Meetings—and Where the World Stands in Accomplishing Them
Next Up: Editor's Pick