Movies about artists making art—or, worse, writers trying to write—are always a risky proposition. For one thing, to everyone out there in the real world who’s scrambling to make an honest living, the job of creating stuff doesn’t seem like a real job at all. For another, the chief drama of these stories usually revolves around an artist’s inability to create, and that generally involves complaining and self-pity. For a similar dramatic punch, you could also watch paint dry.

Mia Hansen-Løve, always a perceptive director and often a terrific one, takes that risk with Bergman Island—and in the end, after nearly running aground on the rocky shoals of pretension, it pays off. Vicky Krieps and Tim Roth play Chris and Tony, a couple who trek to the Swedish island of Fårö, the locale where filmmaking legend Ingmar Bergman found inspiration for, and made, some of his greatest works. Chris and Tony are both writers and filmmakers, and they’ve made this trip to get some writing done, hoping some of Bergman’s genius dust will rub off on them. It becomes clear that Tony—obviously older—is the far more successful of the two. Chris is floundering creatively; she hasn’t yet made her mark. Though the two have an easy rapport as a couple, you sense some of the inequities right away: Chris seems a bit hapless, unable to focus. Meanwhile, Tony strides casually around the island, wearing sweater-and-stretched-out-tee-shirt ensembles, wobbling off on his bicycle to tick off the things on his schedule: those might include conducting a filmmaking masterclass, or taking a tour of the local Bergman-esque sights. You get the sense he’ll be the one getting lots done on Fårö, while Chris perhaps seems destined to fritter away her time, restlessly but platonically, with a Swedish film-student cutie (Hampus Nordenson) who knows more about Bergman than most of the local professional tour guides do.

This is the part of Bergman Island—the writers-trying-to-write part—that’s almost unbearable. “All this calm and perfection, I find it oppressive,” Chris tells Tony, as she surveys both the scrubbed-clean cottage where they’re staying and the crisp blue air around them. Anyone who has ever risen at 5 a.m. to get some “personal” work done before starting a day job is sure, at this point, to be hearing the strains of the world’s tiniest violin. And admittedly, your tolerance for this couple and their writing problems may depend largely on how you feel about Krieps. Krieps—who first came to the world’s attention as the scheming omelet-maker in Paul Thomas Anderson’s aesthetically eccentric Phantom Thread—is something of a wan, colorless presence. As annoying as Tony’s casual-togs confidence is, Chris’ stalled-out handwringing is worse. She complains aloud that for her, writing is self-inflicted torture. She needs to either get on with it or quit altogether, and you may spend nearly half of the movie wondering why she doesn’t do the latter.

But then Hansen-Løve pulls something of a switch on us, and you remember that this is, after all, the director behind extraordinarily subtle and beautiful pictures like Things to Come and Eden. Chris isn’t stalled out at all; she’s been keeping secrets from her partner, and from us. The heart of Bergman Island is a film within a film—a story of longing and anguished infidelity, which Chris has written and directed, perhaps as yet only in her mind—whose stars are actors played by Mia Wasikowska and Anders Danielsen Lie. This interior film lends life and color to the outer shell of Bergman Island. Suddenly, this is no longer a movie about boring old writers, but about the unfilmable place where ideas begin.

And there’s reason to have sympathy for Chris, the blocked artist: As she tries to work, her pen runs out of ink. In search of a pen cartridge, she treks over to Tony’s desk—he’s out and about, as he often seems to be—and starts snooping around, flipping through a notebook full of drawings and scrawls that are mysterious to her. It’s his working notebook; it shuts her out. The shock of his unknowability troubles her, scaring her a little. This is one of the finest moments in the film, Hansen-Løve’s stark acknowledgment that we can’t know everything even about those we love the most, particularly when it comes to the life of the imagination. There’s another truth here: writing isn’t just a thing done when you sit down at a desk; it’s the sum of what happens in the life you’re living between the lines. Movies about artists trying to make art might be deadly, but movies about people living are where it’s at. And in the end, there’s more living than writing going on in Bergman Island. 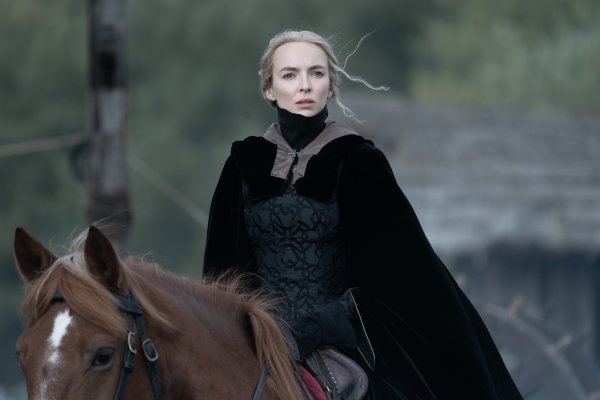 The True Story Behind The Last Duel—and History’s Attempt to Erase It
Next Up: Editor's Pick