Phantom Thread Works Hard at Being a Masterpiece. But Is It?

Paul Thomas Anderson’s belabored corset of a movie Phantom Thread—set in the world of 1950s English haute couture—is not about people, and it’s not about clothes. It’s about obsession, but only if you think of obsession as an insect-like thing you can put under a bell jar, precious and still, rather than a wild force running through actual human veins. The picture, shot by Anderson himself, is beautiful to look at: It has a quietly lustrous, satiny finish, like a swath of antique peau de soie that’s been languishing in the dark, far from sun or air, since the Marie Antoinette days. It’s all so pristine and perfect that even just looking at it is probably an affront: Your eyeballs are sure to soil it. This is a curiously unreachable picture, most certainly by Anderson’s design. I felt discomfitingly indifferent toward it the first time, so I decided to see it again, just to make sure what I was feeling wasn’t actually a twisted kind of love. It wasn’t.

Daniel Day-Lewis stars, in what he has claimed is his last performance, as Reynolds Woodcock, the demanding, eccentric, fabulously named head of his own discreetly successful fashion house. His co-creature in couture creation is his forbidding, astringent sister, Cyril (Lesley Manville, giving a glittering black icicle of a performance). She runs the business, managing the seamstresses who flock in every morning, and stands or sits at Woodcock’s side just about every moment, except in the bedroom. (Their thing doesn’t seem to be about that.)

Then an interloper arrives: While taking a break in the country, Woodcock meets Alma (Vicky Krieps), a sweet, unassuming waitress who pulls off the feat of memorizing his intentionally complicated breakfast order—he ends it with the Borsht Belt-meets-country-gent capper “and some sausages.” Woodcock invites her to dinner, then brings her back to the attic workroom of his cottage. There, he begins to make her a dress. His attention is both controlling and seductive, and Alma begins falling for this handsome stiffie of a swain. Woodcock brings her back to London to live with him (though it takes him a while to sleep with her, because their thing doesn’t seem to be about that). There, she becomes a combination of muse, companion and workroom grunt—you see, romance isn’t dead. Cyril looks on, shooting daggers, like Dame Judith Anderson in Rebecca. Alma, bewildered but also deeply in love, doesn’t know what she’s stumbled into.

We don’t either, which is supposed to be the point. Almost everyone who sees Phantom Thread before you do will, if they’re kind, murmur something about a thing “you don’t see coming.” Actually, there’s a lot you don’t see coming, because so little in Phantom Thread makes any sense in terms of how real people—or even fancy, fictionalized movie people—behave. Ah, but that is the genius of the maestro Anderson: His movies are mysterious runes that we must ponder into infinity.

Or maybe not. There’s some pleasure to be had in watching Phantom Thread, one time at least. Much of the movie is very funny, intentionally or otherwise, like the way Woodcock barks at Alma when he’s busy sketching—he does a lot of sketching—and she interrupts him with a quiet offering of tea. She scoots out of the room, almost backing through the door, and he continues his tirade even as she retreats, forever stuck in the reality of the interruption. It’s hilarious. But why are we laughing? Time and again Anderson breaks the mood of his own film, and we’re supposed to scramble back into its gloomy, obsessive arms on our own. Are we the Alma to Anderson’s Woodcock genius? If so, that game is fun for about 20 minutes.

The performances are OK. In her early scenes, Krieps has a believable, dewy freshness: You can see in the flush of her cheeks all the life Woodcock is missing in his crypt of taffeta. Manville is steely and proper, and watching her clack through the house in her tasteful black heels is a kind of medicinal pleasure. As for Day-Lewis, he actually seems alive in some scenes—the funny ones. But mostly he’s mannered to the point of seeming embalmed, and his much-written-about deep method dive into the inner life of a designer results in one signature gesture: He’s really good at holding pins in his mouth. As he’s measuring Alma for that first dress, he remarks that she has no breasts, and she apologizes, feeling that he’s judging her. “It’s my job to give you some—if I choose to,” he says primly. Any girl with a brain would run a mile. Alma doesn’t, which tells you where her brain is at.

Phantom Thread, no matter how you or I feel about it, is supposed to be an event. It’s Anderson and Day-Lewis’ second collaboration, after their much-admired There Will Be Blood. But even more important, it’s Day-Lewis’s final film. The trumpets have been heard far and wide! Day-Lewis is a great actor who, like all great actors, is not great in every film, and that’s only part of the reason I wish he’d stick around—what might he do next? Acting, done right, is hard work, and it can drain you. But why be so precious about it? If Day-Lewis finds acting so dreary and tiresome, he really should just stop. You never saw, say, Alec Guinness, one of the great actors of his generation, making grand announcements as he drifted toward the door. He just kept going, but if he were to stop, you can bet he wouldn’t have advertised it in advance.

By now, you’re probably wondering, What about the dresses? Phantom Thread is about, supposedly, one man’s obsession with the multitudinous shapes cloth can be dreamed into, coaxed into submission by human hands with scissors, needle and thread. (You also need an iron, a detail Phantom Thread neglects, but never mind.) Anderson has said his script was influenced by the monastic drive of Spanish master Cristóbal Balenciaga, but the gowns here have none of Balenciaga’s ingenious simplicity or inventive elegance. Woodock’s dresses have fussy ’50s shapes, rendered in stiff, rustly silks, though the colors—muted, dusty maroons, fondant lavenders, shimmery teals—are nice. (The costumes are by Mark Bridges, who has done terrific work in other Anderson movies, like Boogie Nights, as well as in pictures like The Artist.) The best clothes are the ones Woodcock and Alma wear in the country, around the time of their first meeting, belted woolen coats and soft-shouldered jackets in windowpane checks. Unsurprisingly, they look happiest and most human when they’re wearing these clothes.

There’s no doubt Phantom Thread will be forever lauded as a great fashion movie, but I don’t think it’s even a good one. Its view of how fashion is made feels desiccated and airless, as if beautiful clothes can come into being only under a dome of oppression and anxiety. Anderson’s last film, the 2014 Thomas Pynchon adaptation Inherent Vice, was as wired and weird as this one is claustrophobic and silly. It seemed Anderson—after a spate of making much-lauded but emotionally stillborn films like The Master and There Will Be Blood—had turned a corner; instead, he appears to have painted himself right back into one. He can no longer make woolly, vital movies filled with feeling. He now has to make art, all stiff satin with very little soft, malleable tweed. And certainly nothing so wild and glorious as an unexpected spot of fringe. 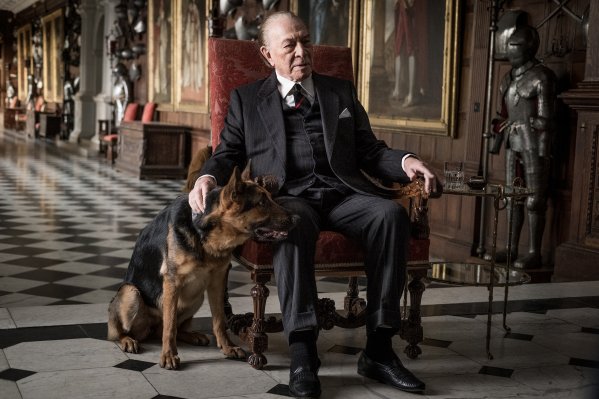 Kevin Spacey's Loss Is Christopher Plummer's Gain in All the Money in the World
Next Up: Editor's Pick