'It Moved Me to Tears.' William Shatner On Briefly Going Where Some Men Have Gone Before

On Oct. 13, actor William Shatner, 90, best known for his role as Star Trek’s Captain James T. Kirk, went to space for real aboard a Blue Origin New Shepard rocket. He was aloft for only 10 minutes—but they were 10 minutes that forever transformed him. The day after his return, Shatner—now the oldest person to have ever traveled to space—sat down with TIME to talk about his experience.

TIME: I was struck, as were many people, by the degree of your emotion when you returned to Earth. You seemed especially moved by the sight of the thin onion skin of atmosphere that is all that protects us from the killing void of space. What affected you about that?

Shatner: I saw the spaceship coming through the blue, and an instant later it was through the blue; this bullet exploded into the blackness of space, so in that instant I saw the blue suddenly disappear, and suddenly space is smack up in my face. I saw death there. The suddenness with which I looked at that blackness, I thought, “whoa, suddenly you go out there and then you’re dead.”

Did you have those intimations of mortality before you left? Did you have any trepidation about the safety of making the journey?

No. I mean, you can be in jeopardy in front of an audience. My own family goes on these rides at the amusement park, and I don’t need to go on that. I’m going to sit here while you guys go up and down for the ride. I don’t need a ride up to give me a thrill. But when it came to going to space, I thought “what the hell, I’ve got this opportunity and why not go through with this experience?” Now, I know it’s safe. At the moment their business model depends on convincing people with money that it’s safe to up, and it is. But still, they’ve been up 17 times, and maybe it’s not gonna go right this time.

Read more: Why William Shatner’s history-making spaceflight is something to celebrate

But it did go right, and when you came home, you seemed transformed. Were you?

Yes I was. I was so besotted by what happened on that flight. It moved me to tears, so much so that … I couldn’t control my emotions for 15 to 20 minutes.

Tell me about the experience of weightlessness. One astronaut told me that while the view is magnificent from space, you never get tired of the ability to fly. Was that your experience?

It’s impossible to describe because the English language, any language doesn’t have a frame of reference, so you can only infer. You jump up in the air and weightlessness is so mysterious and frightening because your whole body reacts against that. You enter weightlessness and suddenly the whole thing occupies your whole being and your whole consciousness.

Many astronauts talk about experiencing the Overview Effect when they come back to Earth—a new appreciation of the need to protect the planet because you’ve seen its fragility, its destructibility from above. Did you come home with a new sense of the importance of saving the world from ourselves?

Yes. We need 7 billion people to be angry. We need to get in motion. This is a struggle against the dark forces of pollution. And I think the overview Overview Effect that people get when they’re in space can help.

For individual people the stakes can be different. [I’m] 90 years old. Oh my God, you know, what have I got? I’ve got a week, a year. Maybe 10 years, and it’s over so quickly. It’s over so quickly, man. But it’s different when you’re 12 years old and still in school, when you’re 20. You’re thinking about your life and the preciousness of this thing. The [politicians] who are making these decisions for us—having trouble getting some goddamn million dollars, billion dollars to fight pollution. Are they crazy? We should send everybody up into space to see what they’re voting against. It’s crazy. There’s nothing more important.

Do you really think the political system could ever be shaken out of its constant state of partisan warfare by that kind of change in perspective?

I don’t know. I think everybody knows how sick the political situation is, everybody fighting rather than being patriotic and doing what’s best for the country. Everybody’s doing what’s best for themselves. I know that American history is rife with that kind of historical antecedent, in the past it has worked itself out, and the pendulum has swung the other way. So maybe it will again.

You’ve now been on a suborbital mission to space. Would you like to go back to space for a full orbital flight?

I don’t know. I’m calling you from my beautiful home, overlooking the San Fernando Valley. The sun comes up. I’ve had a lovely egg sandwich my wife made, my two dogs love me and I’m sitting in a comfortable chair, and I’ve just come from this thrilling thing of life. I’m going forward to entertain audiences tomorrow and all weekend. And I’m crying in the middle of this fulfilling life.

I’m happy petting my dogs. I don’t need any more of that stuff. 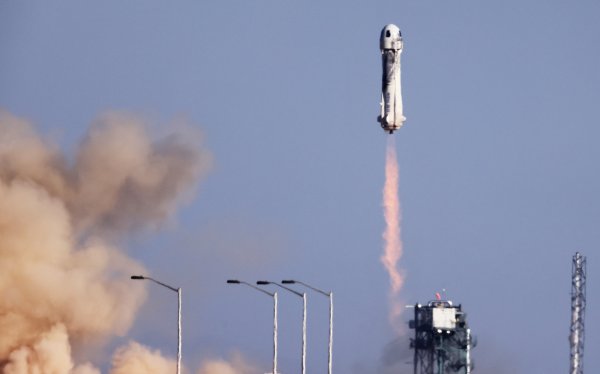 Why William Shatner's History-Making Spaceflight Is Something to Celebrate
Next Up: Editor's Pick