Taken aboard Apollo 8 by Bill Anders, this iconic picture shows Earth peeking out from beyond the lunar surface as the first crewed spacecraft circumnavigated the moon, with astronauts Anders, Frank Borman, and Jim Lovell aboard.
NASA
By Jeffrey Kluger

The best way to appreciate the planet fully is to leave the planet entirely. To inhabit a world is to get awfully used to it. The sky is up there—big as ever. The ground is down there—solid as ever. The ocean is over that way. Canada is up the other way. There are happy places—Paris, Bora Bora. There are parts of the world—North Korea, Afghanistan—where people suffer tremendously. Our own place in all of that determines who we become. We’re like wine grapes; we have a terroir, a home soil that flavors us and changes us, and once we’ve become one thing it’s hard to become—or even understand—something else.

But for a tiny handful of us—fewer than 600 in all of human history—there’s been a way outside of all of that, and it’s by flying above all of that. Ever since Yuri Gagarin became the first human being in space, 60 years ago this April, astronauts have come home to describe what they call the Overview Effect: the change that occurs when they see the world from above, as a place where borders are invisible, where racial, religious and economic strife are nowhere to be seen. The blue and green Earth appears alive, and yet denuded of people. The atmosphere reveals itself to be what it is: an impossibly thin onion skin that protects us from the killing void of space and yet appears penetrable, destructible.

The further you get from the Earth, the more the Overview Effect asserts itself. In 1968, the crew of Apollo 8 became the first humans to orbit the moon and the first to move far enough away from Earth to be able to see it in full—a fragile, glassy sphere, hanging alone in black space. When Frank Borman, the commander of the mission, first saw that sight, the cockpit voice recorder captured him exclaiming, “What a view!” When he spoke of the experience afterwards, he recalled that what he was really thinking was, “This must be what God sees.”

In his book Floating in Darkness, retired astronaut Ron Garan reports a touch of the Overview Effect when he was on the nighttime side of the Earth, where the blazingly bright cities attest to the high—if flawed—intelligence that dominates the planet. Gazing down on Shanghai after dark, he observes, “The whole scene looks somehow biological. The city has glowing tentacles reaching out in all directions to other radiant cities. The scene looks like a microscopic photograph of a nerve cell. Every city is like a giant nerve cell in the brain of the superorganism called humanity.” If as tough and mercantile a place as Shanghai can make an astronaut go dreamy, any spot on the planet—when seen from high enough—can too. But those extreme feelings can swing the other way, when the Overview Effect reveals the depredations of the world.

In my new novel, Holdout, the lead character, Walli Beckwith, is driven to an extreme act by the power of the Overview Effect. When an emergency forces the evacuation of the space station, she refuses to leave, staying aboard alone, explaining opaquely that she will not come home because she “would prefer not to.” Only later do we learn her reason: She is remaining aloft to protest widespread burning of the Amazon and the dispersal and killing of the Indigenous tribes. She chooses to stay where she is and lead a global movement demanding international intervention to stop the devastation.

“I will come home,” she tells the world, “when we have put an end to the project that is causing damage so great it’s visible from space.”

Of course, Walli Beckwith is not real. But Ron Garan is real. Yuri Gagarin was real. The near-600 people who have flown into space as well are all real. And so too are uncounted others who will follow them as the commercial space industry continues to develop.

Still, not everyone will go. But that doesn’t mean some measure of the Overview Effect is not available to us as well. Spend a little time gazing out at the ocean and try not to be moved by the grandeur of what you see. Spend a little time at the rim of the Grand Canyon and try not to fall in love with the planet. In a 2013 study, researchers administered to two different groups of people a survey designed to measure an individual’s level of spirituality: One group first looked at pictures intended to inspire awe: a sunset, a galaxy, mountains, canyons; the other group was shown no such pictures. Repeatedly, those who had seen something of the magnificence of the universe first scored spiritually higher than those who had not.

Spirituality need not mean religion—though it can. It may simply mean something transcendent, something beyond the quotidian—something like, well, the feeling the Overview Effect elicits. Going to space may provide a full dose of awe mainlined straight to our emotional center. But it’s available in smaller doses too—ones available without ever leaving the ground.

It’s an unalloyed good that spacemen and spacewomen can travel from the Earth and come home with pictures and experiences that remind us of the fragile, breakable, beautiful whole that is our world and only home. But it’s an unalloyed good too that if we make the effort, we can find some of that feeling for ourselves. The overwhelming majority of us will never leave the planet; but that doesn’t mean we can’t find powerful ways to love the planet. 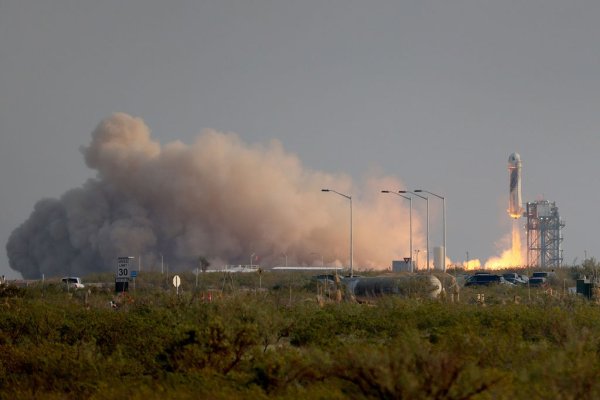 How Bezos, Branson Spaceflights Compare to Inspiration4
Next Up: Editor's Pick