NASA's Perseverance Mars Rover Found Some Boulders. That's a Much Bigger Deal Than it Seems

The rule for most Mars missions, or at least those looking for signs of life? Follow the water. Choose a place that was once wet—and Mars’s now-dry riverbeds, sea basins and ocean floors offer plenty of those—and do your spelunking there. With limited missions and a multitude of promising sites, however, the trick is to choose just the right landing zone. Now, a new paper in Science suggests that when it comes to NASA’s Perseverance rover, which landed on the Red Planet in February, mission planners chose right indeed.

Perseverance touched down in Jezero Crater, a 45 km (28 mile) wide depression in Isidis Planitia, which is itself a 1,200 km (750 mi) plain in the northern Martian hemisphere. About 3.7 billion years ago, Jezero Crater was Jezero Lake—a standing body of water up to 2,500 m (1.5 mi.) deep. Pictures taken from orbit by NASA’s Mars Reconnaissance Orbiter show a fan-shaped formation along the crater’s western rim, which was once a broad delta fed by an inflowing river that helped fill the basin. But when the rover touched down, researchers got a closer look—and what they found was stunning indeed.

For the new study, a team of 39 investigators led by planetary geologist Nicolas Mangold of France’s University of Nantes, analyzed images taken within Jezero by two of the Perseverance rover’s suite of 19 cameras. The team initially focused on a formation dubbed Kodiak butte, a flat-topped hill at the western edge of the crater, about one kilometer (.62 mi.) south of the main fan.

Earthly buttes in the American desert Southwest are formed principally by erosion and weathering. Kodiak, by contrast, was built layer upon layer, as sediment was carried in by periodic rushes of flowing water. Like similar sedimentary formations on Earth, Kodiak features three kinds of layering: A so called bottomset (horizontal layers at the floor of the crater caused by grains slowly settling out of the water), a foreset layer (loosely sloping sedimentary layers atop the bottomset, transported in by roiling water) and a smooth top set (which, like the bottomset, is caused by a slow settling of grains).

Of all of the layers, researchers are most interested in the bottomset, made of sandstone and mudstone—and for good reason: as on Earth, any biology that emerged in the Jezero waters would most likely have settled into the mud and sand at the base. “What we observed at Kodiak was our key observation,” says Mangold. “If there are signs of ancient life in a formation like this it would typically be in sandstone, which is the bottomset.”

Just as intriguing is the main, western fan north of Kodiak, though less for what it says about Martian biology than geology. Like Kodiak, the western fan was built slowly over time by the deposition of sedimentary layers transported by water. Unlike Kodiak, the fan appears to have had a violent history, as evidenced by two dozen large boulders and hundreds of smaller cobbles embedded in the fan walls high above the crater floor. These were not slowly, gently sedimented into place. Rather, they were hoisted and tossed by periodic flash flooding powerful enough to move such heavy objects.

“The placement of the boulders was probably our most surprising discovery,” says Mangold. “Delta fans typically consist of sand and gravel, not boulders. Here the river is only 30 to 40 meters wide and a few meters deep, but it was still enough to move the boulders.”

The presence of the flooding, the researchers wrote, suggests a warm and even humid Mars, one on which floods could have been caused by rains or snowmelt—though Mangold concedes that, for now, is mere speculation.

“We have no proof on Mars of the origin of these floods,” he says. “That is something we want to be able to answer.”

We may yet get that answer. If Perseverance is anything like the surprisingly durable Spirit, Opportunity and Curiosity rovers that preceded it, it should have a decade or more of life left. Kodiak butte, the western fan and many other sites should be studied not just via orbital photographs, but with onboard instruments that can drill into rocks, blast them with lasers to analyze their composition, and scoop them into sample tubes to be brought back to Earth by a sample return mission that is now in development. Mars’s best and wettest days might be behind it, but if there is evidence of ancient—or even extant life—somewhere on that distant world, the work that Perseverance is doing may one day reveal it. 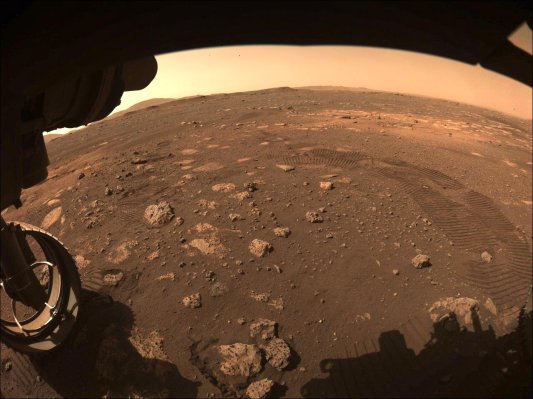 Mars Was Always Destined to Die
Next Up: Editor's Pick