The Shorter Work Week Really Worked in Iceland. Here’s How

Reykjavik, Iceland on December 18, 2018. The Hallgrimskirkja church is predominately centered in the capital, which is the largest city of the island of Iceland.
Patrick Gorski—NurPhoto/Getty Images
By Virginia Lau and Ragnhildur Sigurdardottir / Bloomberg

Even as the Covid-19 pandemic forced companies around the world to reimagine the workplace, researchers in Iceland were already conducting two trials of a shorter work week that involved about 2,500 workers—more than 1% of the country’s working population. They found that the experiment was an “overwhelming success” —workers were able to work less, get paid the same, while maintaining productivity and improving personal well-being.

The Iceland research has been one of the few large, formal studies on the subject. So how did participants pull it off and what lessons do they have for the rest of the world? Bloomberg News interviewed four Icelanders, who described some of the initial problems that accompanied changed schedules, yet they were helped by their organizations which took concerted steps like introducing formal training programs on time-management to teach them how to reduce their hours while maintaining productivity.

The trials also worked because both employees and employers were flexible, willing to experiment and make changes when something didn’t work. In some cases, employers had to add a few hours back after cutting them too much. Iceland did the trials partly because people were reporting relatively long working hours, averaging 44.4 hours per week—the third highest of Eurostat countries in 2018.

Participants in the Iceland study reduced their hours by three to five hours per week without losing pay. While the shorter work hours have so far largely been adopted in Iceland’s public sector, workers and managers used simple techniques to maintain productivity while cutting back on time in the office. As employees from Silicon Valley to Wall Street look for better ways to balance work and life, here are tips from four Icelanders.

As director of capital Reykjavik’s Land and Operation agency, Hjalti Guðmundsson manages a team of about 140 people. Most of them work outdoors, on tasks like road maintenance, cleaning streets and gardening. Before starting the trial in 2016, employees worked long hours, usually from 7 a.m. until 5:30 p.m. or later, though work from 3:30 p.m. onwards was counted as overtime.

Since the organization has different work sites, he was able to experiment with two different models simultaneously. At some sites, four of the five work days were shortened by an hour, allowing staff to finish at 4 p.m. At others, staff worked regular hours Monday to Thursday, and a half day on Friday. Salaries were unchanged, with written agreements between employers and employees. And at the end of the trial, staff voted for their preferred model as a permanent arrangement. The result was clear – more than 90% of workers wanted to shorten their work day by one hour four days a week.

“It didn’t surprise me that they wanted to do that, because if you work from 7:30 a.m. to 5 p.m., the last hour between 4 p.m. and 5 p.m. are not very productive,” explains Guðmundsson. “Contrarily, I think we’ve gained productivity, not only by this hour. But people are more willing to do their jobs in the active work time.”

Those who worked in an office had shorter meetings. Those who worked on site spent less time going to doctor’s appointments and physical therapy, as fewer sick days were reported. Workers reported having more time to spend with their families and on hobbies. Many appreciated gaining an extra hour of daylight, especially during the winter.

Guðmundsson himself has been able to partially enjoy the shortened work week, and says he aims to commit to the new model by the end of the year. As a manager, he wants to lead by example. “Most of the projects can wait until tomorrow morning,” said Guðmundsson. “It’s a mindset, I think. You just have to work your way through this, you know?”

Read more: These Are the Most Productive Countries in the World

Arna Hrönn Aradóttir, a public-health project manager in Reykjavik’s suburbs, was one of the first to trial shorter hours as her workplace was chosen for the experiment in 2015. As a mother of five children, Aradóttir struggled to balance an 8-hour work day with childcare and housework. At the beginning of the trial, she opted to shorten her work day by an hour every day. Her workplace enrolled her in a time-management course, where she learned to shorten meetings, reduce time spent traveling for meetings and schedule her work more efficiently.

“I feel like I’m more focused now,” said Aradóttir. “Before the pandemic, I spent a lot of time going to a meeting by car, but now I can sit in my office and have meetings through my computer. So I have gained four hours in my work day.”

She used to have a 40-hour work week, but now works just 36 hours for the same pay taking on regular 8-hour days on Monday to Thursday, and 4 hours on Fridays. This in turn has enabled her to study for a master’s degree, enhancing her position on the job market. When there’s no school, she says she goes cycling or hiking, and has more time for herself.

“The benefits for us is that we had more quality of life,” said Aradóttir. “It has helped me to spend more time with my children and experience less stress.”

Sólveig Reynisdóttir, Aradóttir’s boss, said Reykjavík Service Centre’s participation was in response to an annual employee survey that revealed that its workers experienced a lot of strain in their jobs. The center experimented with the number of hours they would reduce in the work week, and at one point had to add back some hours after cutting too much.

“We have shortened it five hours, then three hours and now four hours a week,” said Reynisdóttir. Some parts of the transition did not go as smoothly as expected. Employees were reluctant to go from a 35-hour to 37-hour work week, even though it was still fewer hours than before the trial.

But overall, Reynisdóttir views the trial as more positive than negative. Productivity was maintained while employees reported greater job satisfaction and fewer sick days that involved short illnesses like colds.

Like Aradóttir, Reynisdóttir said she was able to maintain productivity by shortening meetings and replacing in-person ones with online sessions, saving on travel time.“Covid has pushed us in that direction,” explains Reynisdóttir. “The waiting lists are not longer. The number of interviews is on par with what was before.”

Read more: Stressed at Work? Here’s How to Feel Better

“It has made my job easier to have a shorter work week,” said Reynisdóttir. “The employees are more satisfied which is of great importance for me as a manager.”

Saga Stephensen just started the shorter work week this January. Collectively, she and her colleagues voted to have a full day off every other Friday and work regular hours the rest of the time.

Like Aradóttir, her workplace enrolled her in time-management courses that enabled her to shorten and reduce meetings, replace in-person appointments with online ones, thereby cutting travel time as well. Her workplace also decided to have no meetings on the Fridays they do work, allowing them to wrap up tasks at the end of the week.

“That has really helped because we have a lot of meetings and you rethink them,” said Stephensen. “You think about if you really need that meeting and if it is necessary.”

It took some time for her and her colleagues to adjust to the new schedule. On weeks that she has Friday off, she sometimes ends up working longer hours other days, she noted. But overall everyone is pleased with the new arrangement.

“I think because people think that this is a very positive thing, everyone is trying hard to keep this up,” said Stephensen. “We are also urged by our bosses to take advantage of our day and take the time off.”

On her Friday off, she now spends time doing household chores, meeting up with family and friends, and on occasion does a short trip during her extended weekend. Stephensen also finds it easier to return to work after recent holidays, she said. “I did not feel sad for the holiday to be over because I knew there were some breaks to look forward to.” 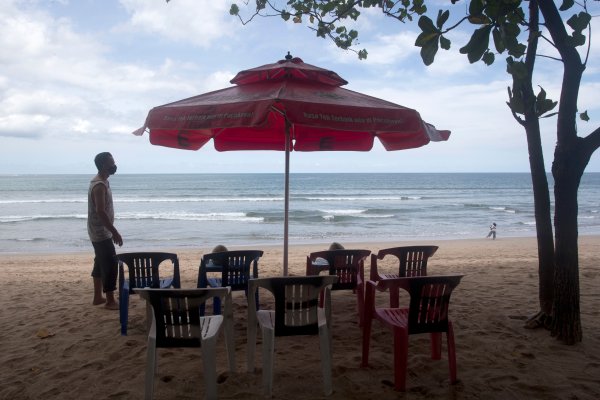 Bali Welcomes Back International Tourists
Next Up: Editor's Pick