Spain Is Going to Trial a 4-Day Work Week. Could the Idea Go Mainstream Post-Pandemic?

A man rides a bike along an empty street during a COVID-19 lockdown in Seville, Spain, on May 8, 2020.
Marcelo del Pozo—Getty Images
By Lisa Abend

It wasn’t long after her company switched to a four-day workweek that Pilar Meseguer began noticing the benefits. Absenteeism fell nearly 30% at Delsol, the software firm in southern Spain where Meseguer is deputy director, and satisfaction rates among both her co-workers and their customers rose. But there were also some smaller, more personal gains. “I could go to the supermarket on Friday instead of Saturday when it’s packed with people,” Meseguer says. “It’s a simple thing, but it makes a big difference.”

Soon, many of her compatriots may have the same experience. Earlier this year, the Spanish government agreed to begin a small, nationwide trial of a four-day workweek, and will meet in late March to hammer out the details. The concept itself is not new; the four-day week has been a goal of many left-leaning political parties since the start of the 20th century, and no less an authority than economist John Maynard Keynes argued that ever-increasing efficiency would soon free up more leisure time within industrialized societies.

Already, dozens of companies around the world—as well as at least one municipal government—have trimmed a day from their weekly schedules. But Spain’s pilot is on track to be the first national test. And although the potential transformation of something as deeply ingrained and seemingly immutable as the Monday-to Friday, 9-5 grind is, unsurprisingly, controversial, it just might be an idea whose time has come.

Why a four-day week appeals

Even before the COVID-19 pandemic, concerns about work/life balance had pushed some companies to experiment with a shorter work week. Like Delsol, both Microsoft Japan and the U.S.-based burger chain Shake Shack introduced four-day schedules in 2019, betting that such a measure would increase worker satisfaction and make the company more attractive to employees, especially those who are parents struggling to fit their jobs with their children’s needs. But after the coronavirus pushed legions around the world to work from home, other companies, including Unilever in New Zealand and Shopify in Canada have launched trials of their own, often in an attempt to respond to employees’ growing sense of burnout or simply buoyed by the newfound flexibility in the workplace.

In Spain, the idea has been growing for a couple of years. When the progressive party Más País launched in 2019, it included the 4-day work week as part of its platform, and went on to propose the trial that won the Spanish government’s approval in January. Although the specifics remain undecided, the pilot, which is expected to launch in September and last three years, will use 50 million euros in European Union funding to compensate an estimated 200 companies for reducing their employees’ work week to 32 hours—without cutting their salaries.

For Más País, the change would accomplish important environmental and social goals. “Climate change obliges us to do things differently; we have to transform our way of working in order to reduce carbon emissions,” says Íñigo Errejón, party leader and member of parliament. “But how we work now is also not biologically or socially sustainable. European economies can’t compete with China to work more hours for less money. We should compete to work in better conditions.”

Political and business leaders in Spain who oppose a four-day week—that appears to include at least two government ministers—have argued that the reduction would devastate further a country that not only has the second-lowest levels of productivity in Europe, but saw its economy shrink 11% last year–the worst contraction since the Spanish Civil War in the 1930s.

Suggesting that the proposal is intended to distract from more serious problems like skyrocketing unemployment, Nuria Chinchilla, professor at IESE Business School, sums up this point of view. “It’s a very difficult time, with the economy gravely affected. Any talk of increasing costs to businesses is contradictory to economic recovery. Maybe this isn’t the right moment.”

From Errejón’s perspective, it is precisely because the economy, long dependent on the kind of mass tourism that ceased to exist during the pandemic, is in crisis that the change is especially relevant now. And there is some research to back him up. In a study published in January in the Cambridge Journal of Economics, Luis Cárdenas and Paloma Villanueva establish that a 5-hour reduction in work hours across Spain in 2017 would have created 560,000 jobs, raised salaries nationally by 3.7% and increased the GDP by 1.4%.

Companies that reduce their employees’ hours generally have to hire more staff to maintain the same level of productivity, the researchers note. Additional salaries drive costs up, but a those can be largely offset by raising prices. ”Because it is hiring more people who are then spending more, and prices are increasing, the overall effect is positive,” Cárdenas, an economist at Madrid’s Complutense University, said in an interview.

Yet there are other concerns beyond the purely economic ones. Chinchilla also sees the plan as potentially counter-productive when it comes to achieving work/life balance. “Reducing the work week to four days means either cutting salaries or adding hours, and the work day in Spain is already really long,” she says. “What we need is more flexibility on these questions, not more limits.”

The Danish town that works Monday to Thursday

Still, flexibility and a mandated Friday off aren’t necessarily mutually exclusive — and for evidence look a few thousand miles north of Spain, at the Danish town of Odsherred. In a bid to increase the satisfaction of municipal government employees— many of whom commute from Copenhagen, roughly fifty miles away— the town reduced their workweek to Monday through Thursday in 2019. The experiment, which will run until September 2022, allocates two of the 37 hours per week required by national trade union agreement to self-directed “professional development” but otherwise retains the same total workload, with employees dividing the remaining 35 hours among four days instead of five. “At first everyone was quite worried, because they thought that on the days they worked, they would be putting in very long days at the office,” says Claus Steen Madsen, Odsherred’s municipal director, who designed the pilot. “But that’s why we also emphasized flexibility. People could work from home, or while they’re on the train—all of that counts to the 35.”

They also emphasized greater efficiency, making telephone assistance available to the public by appointment only, and encouraging a 30-minute limit on staff meetings. And having a longer weekend helped. “One thing that people are saying,” says Madsen, “Is that the three days off allow them to re-charge, so they have more energy the rest of the time. It doesn’t matter that you have to work a little bit more than four days, because you just do it better.”

In general, he says, both the 300 municipal workers affected by the change, and their ‘customers’–in this case, citizens— have been pleased with the results, and the municipality expects to continue with the four-day week when the trial period ends. But there have been some surprises: satisfaction with the change was lower in departments where staff felt they were being closely monitored by their bosses on how they spent their time. “We learned that if you don’t trust in your employees, you can’t do this,” Madsen says. “You have to believe from the start that employees actually know what they’re doing.”

Trust, in other words, influences whether workers appreciate the change or resent it. But so too do other factors, says Janne Gleerup, a professor at Denmark’s Roskilde University who has studied the reduced week program in Odsherred and elsewhere. “Level of education, type of work performed, social relationships and degree of autonomy all play a role,” Gleerup says. “Families with small children tend to find that a four day week actually increases stress on them rather than reducing it. Especially women can feel they have been caught in a time trap because by late afternoon, they need to be parents, but have to be workers at the same time.”

The measure can have unintended consequences for gender equality as well. In 2020, school closings and the embrace of work from home accentuated the existing imbalance between men and women’s unpaid labor. According to one European study, women spent an average of 62 hours a week caring for children and 23 doing housework, while men devoted 36 and 15, respectively. “In Europe we’ve also seen during [the pandemic] a process of re-traditionalizing,” Gleerup says. “Women still have their jobs to do, but they take over all domestic tasks too, so it reinstalls these traditional gender roles.”

‘It can be emancipating’

As more companies and countries—in early February a coalition of unions, businesses, and think tanks called on the Scottish First Minister Nicola Sturgeon to fund a Spanish-style test— float their own four-day plans, success may well depend on the workplace’s adaptability. But the pandemic has done nothing if not teach the value of flexibility. Accounting for the momentum toward a new work schedule, Joe Ryle, who heads the Britain-based 4-Day Week Campaign, told CNBC that the sudden shift to working from home has “opened people’s eyes to the fact that change can happen, and that it can happen very quickly, when we want it to.”

The pandemic has also reminded many that much about how we work..isn’t working. “The reason why there’s these movements internationally now,” says Gleerup, “Is that we work all the time, and then we spend our weekends just sleeping, cleaning, and preparing for Monday, so everything is defined by work. But if you have three days off, you have time where you don’t actually have to do that, where you’re reminded that life is not all about work. It can be emancipating.”

It certainly has been that way for Meseguer. Delsol invested 400,000 euros in its switch to a four day week, hiring additional employees to cover the schedule and buying new technology. But the rewards have been evident: absenteeism dropped 28% and revenues continued to grow at the same rate as they had in previous years. It’s also helped with recruitment and retention: not one of the company’s 189 employees has left since the plan went into effect. “You learn that a business works better when it cares for its team,” she says. “If a company doesn’t focus on its people, no subsidy or legislative change is going to make it work.” 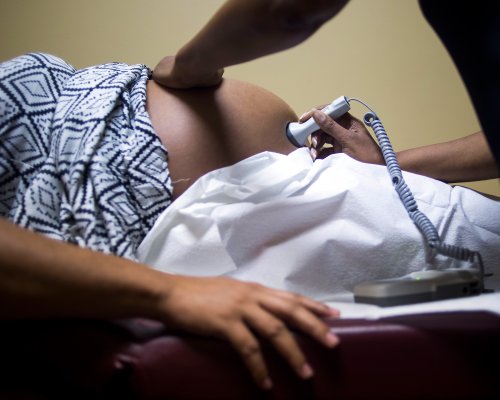 Can Guaranteed Income Improve the Health of Moms and Kids?
Next Up: Editor's Pick