In the four years since Desmond Shum’s ex-wife vanished in China, he must have called her phone hundreds of times. The line was always dead. But that changed early September when he received frantic messages from Whitney Duan urging him to call her number.

It rang and she picked up, pleading with the former tycoon to abandon publishing the book he’d written, Red Roulette: An Insider’s Story of Wealth, Power, Corruption, and Vengeance in Today’s China, which details Duan’s disappearance and the shady business deals involving some of top Chinese Communist Party (CCP) figures that propelled her to become a billionaire and reportedly China’s richest woman.

It was the first contact that Shum had received from Duan since she disappeared from the streets of Beijing in 2017 and came just hours after the first reviews of his book appeared in Western media. Duan and Shum were deeply involved in several transformative and extremely lucrative developments in the Chinese capital, including the Beijing Airport Cargo Terminal and the Bulgari Hotel, and were tightly linked to China’s elites, especially the wife of former premier, Wen Jiabao. Her disappearance was always presumed to be political.

Concerned by the authoritarian turn China was taking under Xi, Shum decided to leave the country in 2015 as his son had been accepted into school in the U.K., his marriage with Duan having broken down two years previously. He has not returned to mainland China since her disappearance.

Shum—who was born in Shanghai, moved to Hong Kong as a child and attended college in the U.S.—speaks to TIME from exile about the book, his estranged homeland and trying to reunite Whitney with their young son. This interview has been edited for clarity and length.

TIME: How was Whitney when you spoke to her?

Her mom passed away back in June. Before that, she made a habit of calling [Whitney’s] phone every day in the hope of one day actually getting through. Obviously, that never happened. So I raised it with Whitney: ‘Your line was dead for four years. Today after the news [of my book] broke, your line is revived, and you can call anybody in the world. That just cannot be!’

From reading the book, it’s clear that you had deep affection for each other and were a very closely knit team. How has Whitney’s disappearance affected you?

It’s very much for my son’s sake. Because he’s only 12 now and it has a psychological impact on him. From time to time, he has outbursts and will cry. He would dream about his mom and talk about what happened to her. If she passed away, you can close the chapter, try to remember the good things and move on with life. But this disappearance is the difficult part to deal with. I wrote the book as a gift for my son and it was only much later that I decided to publish it.

Do you believe that you and your son will ever see Whitney again?

At this moment I don’t see that happening. Because for sure they won’t let her out of China. I can’t even touch the ground in Hong Kong, forget about [mainland] China. I wouldn’t let my son go into China because there’s a real possibility he never comes out. So I cannot foresee we can get to see her in person.

Do you feel safe in the U.K.? After all, China has renditioned people of interest from Thailand and other legal jurisdictions outside its borders before.

Friends keep asking, ‘do you have bodyguards and how is your security arrangements?’ But the reality is that I’m one individual going out against a state like China. If they decide to do something, the little resistance I can put up with is not going to amount to anything, really. I signed my life away when I decided to publish this book.

Have you been surprised by the recent sweeping crackdown of business executives such as Jack Ma, who were previously thought of as “untouchable?’”

Those people were never untouchables. If you look at the list of the “richest person in China”—I think it’s been published for over 20 years now—most of them haven’t done well. Maybe 40% ended up in jail and 80% of them drop out from the list for whatever reason. Thinking that anybody is untouchable just for having money is a joke.

Xi Jinping launched a “tigers and flies” anticorruption campaign. Did that affect the venal relationship-building networks you describe in your book or have they just become more clandestine?

Much of what I put in the book is baked into the system. It’s in the DNA of the party-state; it won’t change, it cannot change. Just look at the [CCP] centennial celebration [on July 1]. There were seven busloads of “red aristocracy”—the top of the cream of the crop—watching the parade beside Xi Jinping. These people are general citizens, without specific titles, who make no particular contribution to society. The only reason they got invited and sit next to the President is bloodline.

Even in [the pre-revolution CCP base] in Yan’an, they had three different types of kitchen: the smallest kitchen for the top leader; a medium sized canteen for the bureaucrats; and a mess kitchen for the masses. That’s the Communist Party in the 1930s. [Nepotism] was baked into the system from the day one.

In the book, you write a lot about money flooding in from big American banks and government-linked investment funds during the boom of the 1990s and 2000s. How much is the West to blame for enabling the malfeasance and venality that came to define China?

There are two sides of it. On one side, we all are guilty of naïvety and wishful thinking because many places in Eastern Europe as well as Asia—Korea, Indonesia, Taiwan—all become more democratic once society got more affluent. So there’s plenty of historical precedents to demonstrate that.

And then, obviously we were profit-driven and to some extent blindly willing to tolerate many things that were globally and universally unacceptable. Of course, we were profiting—including myself—and it seemed like we were helping things move in a positive direction. So I’m going to set the “imperfections” aside for now and just go with it.

In the book, you talk about how former Premier Wen Jiabao aspired for more democracy within China, but kept his cards close to his chest. Do you believe there are still people like that inside the CCP today?

I’m sure there are people like that. The question is: are they a political force? I am pretty sure they are not. The Western media always play up this idea of a “reform” force working against the “reactionary” force and we should help [the reformers]. But there is no such political force. Even Wen Jiabao: he definitely voiced [democratic opinions]. But is he a political force? He is one individual—albeit in a significant position—but he’s not got a political force behind him to push that [agenda].

So, what is the biggest threat to the CCP today?

China has always been an authoritarian regime but is now turning into a one-person dictatorship. And that is fundamentally dangerous as everybody within the system is trying to win favor with [Xi] and sing to his tune. And a dictator get blinded and makes stupid mistakes. That dictatorship is a risk because Xi has intentionally wiped out all possible successors. And if something happens—a heart attack, say, or someone puts a bullet in him or he is incapacitated for an extended period—what would happen then?

His purge over the last 10 years has been brutal. The system wasn’t prepared for it, which is one of the reasons why Xi could build himself into a dictatorship, because the system wasn’t prepared for somebody to come in and be that ruthless. But now the system has experienced it. If something were to happen to him, the risk to the whole of China will be tremendous. There’d be a lot of people saying, ‘Well, I’ve got to go for the throne because if I don’t get it, my outcome is brutal.’

You’ve were friendly with many people in Xi’s inner circle. How do you assess his character? Do you believe he’s a socialist zealot like many people seem to think?

His personal power drive is securing the longevity of a CCP led by red aristocracy. Because when [the Tiananmen Square massacre of] ’89 happened, Xi was part of that batch. That was actually said by [former leader] Deng Xiaoping: “Our babies are more trustworthy.” All the major families have one son groomed within the system—[former Chongqing chief] Bo Xilai, Xi Jinping [whose father was senior official Xi Zhongxun]—and that’s when they rose to the top very fast. There was a conscious decision at that time.

Xi is driven first by the need for the CCP to hold onto power and he is the best person to make that happen. And then all the other stuff—taking down the tech titans, restructuring the system—is so that the CCP’s power can last. And then they are deeply, deeply paranoid. That’s why they try to rewrite a Chinese history, close China behind the Great Firewall, brainwash the population, including what’s happening in Xinjiang: There should be no dissent to challenge our power.

Given all the global condemnation of human-rights abuses and other things, do you believe the CCP still cares what the world thinks of it?

It’s a dichotomy. They definitely care, but the first thing for them is permanent hold on power. That’s the first priority and international image and all else becomes secondary and in service of that.

So, how should the U.S. and Western powers meet the challenge of China?

People need to realize what are we dealing with. And in the long term, what’s the outcome we wish for? Because at the moment, everybody’s wishy-washy. The reality is that these two systems cannot coexist in the long-term. What really needs to be done is to contain not just geographic expansion, but also economic. Ultimately the fight in today’s world is by economics.

What happened with Trump—like him or not—is that he changed global opinion on China. Because the whole world’s trying to look away, and one leader comes out and says, ‘This is what I’m seeing and this is what we’re going to do.’ That changed people’s opinion. I’m not sure the E.U. would ever call China a “systemic rival” without Trump. So Trump definitely played his role. 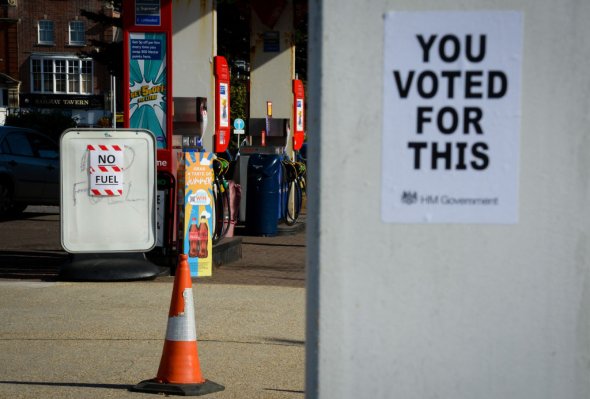 The Fight to Control the Narrative Over Climate and Energy Security
Next Up: Editor's Pick