How China Is Cracking Down on Its Once Untouchable Tech Titans

For years, China’s tech entrepreneurs were considered rock stars: Icons whose rags-to-riches career paths, guile and contempt for the rulebook earned them cult-like status. But over the past few months regulatory scrutiny, combined with growing anger at their obscene wealth, accumulated on the backs of downtrodden workers, is wobbling the perch of these previously untouchable tycoons in the communist-ruled state.

One high profile casualty has been Alibaba founder Jack Ma, who in October publicly chided Chinese officials for a lack of imagination and “pawnshop mentality,” prompting their leader, President Xi Jinping, to torpedo the planned record $37 billion public listing of Alibaba’s fintech arm, Ant Group. It was subsequently ordered to restructure. In April, Alibaba was fined $2.8 billion for breaching anti-monopoly rules.

“It is not lost on us that today’s society has new expectations for platform companies, as we must assume more responsibilities as part of the nation’s economic and social development,” Alibaba wrote in a statement following the fine.

What’s clear is that the playing field for China’s tech sector is undergoing a sweeping releveling. Critics say the tech industry had, in the pursuit of growth at all costs, coalesced behind a few monopolistic giants, while crowding out true competition and innovation. China is not the only country grappling with antitrust issues: the U.S. is engaged in its own debate with big tech. But a key distinction in China is that e-commerce counts for a much larger proportion of overall retail than the U.S., meaning market dominance greater impacts both consumers and the overall economy.

Today, new rules are fast emerging for China’s wealthiest tycoons: don’t publicly criticize the Party; keep a low profile; give workers a fairer shake; and make state priorities your priorities. “It’s really significant and could have a major impact,” says Rebecca Fannin, author of Tech Titans of China. “These companies had been allowed to flourish without a lot of scrutiny. This crackdown could just be the beginning.”

Up until around 2015, the message for China’s tech titans was “growth at all costs,” says Rui Ma, an angel investor and co-host of the TechBuzz China podcast. “But now the government wants more stable and sustainable growth.”

A case in point is Alibaba, which began life as an online marketplace but whose Fintech arm, Ant Group, stealthily expanded into services like banking, insurance and microlending—the latter contributing nearly 40% of Ant’s revenue today. But while Chinese banks are obliged to keep at least an amount equivalent to 30% of lending portfolios in reserve, Ant Group’s opaque classification helped it sidestep these regulations and the unit only backed around 1% to 10% of loans itself, with the rest coming from large commercial banks. Regulators decided that the 2.15 trillion yuan ($330 billion) of outstanding debt that Ant Group was exposed to at the end of June, according to its initial public offering prospectus, presented significant systemic risk to China’s entire financial system.

“Now the party’s over for the technology companies, they will be regulated with the same rules as the banks,” Michael Sung, founding co-director of Fudan University’s Fanhai Fintch Research Center, told a recent meeting of Shanghai’s Foreign Correspondents’ Club.

Ma’s fate sent pangs of anxiety through the tech ecosystem—as well as some relief. In October, just days before Ma’s speech, Lufax Holding, one of China’s largest online wealth management platforms, an which is backed by insurance giant Ping An, filed to go public in the U.S. “We were very lucky to be listed a little earlier than [Ant Group],” one Lufax employee tells TIME, asking to remain anonymous because he wasn’t authorized to speak to the press. “Otherwise, the consequences are unimaginable.”

Read more: What the Saga of Jack Ma Says About China Under Xi Jinping

Meituan has emerged as regulators’ next big investigation target. Rui Ma says she counts at least five different municipality regulators that have fined Meituan so far this year. In January, Meituan shut down its crowd-sourced health insurance service amid regulatory scrutiny. In March the company was slapped with the fine for unfair competition practices. Then consumer watchdog the Shanghai Consumer Council criticized Meituan for a broken refunds system and misleading content. In a statement, Meituan said it “will actively cooperate with the investigation by the regulatory authorities to further improve the level of business compliance management…and earnestly fulfil its social responsibilities.”

While the new regulation landscape isn’t contingent on personalities, having an outspoken CEO certainly doesn’t help—not least with investors. Last week, Meituan shed $26 billion of value over two days after its boss, Wang Xing, posted obscure verses from a millennium-old poem about China’s first emperor’s misguided efforts to stifle dissent. Wang’s personal wealth dropped $2.5 billion as a result. Wang, a classical literature fan known as much for his business acumen as going toe-to-toe with rivals, later deleted the post and explained that his true target wasn’t the government but his own industry. It mattered little.

Even before Jack Ma was cut down to size, the title of China’s wealthiest tycoon appeared a poisoned chalice. Wang Jianlin, the flashy founder of commercial real estate conglomerate Dalian Wanda, was China’s richest person in 2016 before the government forced him to divest overseas assets. Then came Hui Ka Yan, China’s richest in 2017, whose China Evergrande Group real estate firm was ordered to cut back on debt after falling short of tightened rules on corporate leverage.

In fact, becoming top dog is so fraught that many observers suspect that Colin Huang—founder of e-commerce firm Pinduoduo—purposely divested company stock last year to avoid becoming the country’s wealthiest individual. Huang controlled 43.3% of Pinduoduo shares but suddenly reduced his stake to 29.4%, according to a June 30 regulatory filing. Even at today’s share price—down 40% on its mid-February peak—Huang’s prior stake in Pinduoduo would have put his net worth at $62.5 billion, and installed him above bottled-water tycoon Zhong Shanshan at the top of China’s rich list. In March, Huang quit the six-year-old company altogether and is instead turning his attention to life sciences research aimed at boosting rural agriculture. “Keeping a lower profile seems to make sense these days,” says Fannin.

Nobody knows whether Huang was deliberately trying to dodge the limelight: Rui Ma notes that his mentor, electronics tycoon Duan Yongping, also retired around 40. Pinduoduo had faced criticism for counterfeit products, trampled worker rights and a business model which focuses on selling inferior products to lower-tier cities, whose less affluent populations are focused on bargain prices above all else.

In what may be a shrewd move, the company has positioned itself as a supporter of rural communities, selling 270 billion yuan ($41.5 billion) worth of agricultural produce last year, nearly double the previous year. It comes as the Chinese Communist Party has made boosting the agricultural sector and farmers’ livelihoods a top policy priority in its new five-year-plan. Pivoting from a sector perceived as exploitative to one that closely aligns with government interests is also good business, given the raft of tax breaks and incentives that often come along with it.

Charity and public service is also now requisite for the biggest tycoons. In July 2020, Huang, donated 2.37% of Pinduoduo shares to his newly formed charitable trust Starry Night Foundation, from which he subsequently donated $100 million to alma mater Zhejiang University. Last year, Tencent Charity Foundation’s three-day annual fundraiser raised 3 billion yuan ($470,000). Meanwhile, the Jack Ma Foundation played a key soft power role, distributing personal protective equipment around the globe early in the pandemic, although, for Ma, it didn’t count for much in the end. Meanwhile, the notoriously gruff and reclusive Zhong is backing a COVID-19 vaccine and medical testing kits through his investment in Beijing Wantai Biological.

The Chinese Communist Party’s drive for greater regulation dovetails with growing public dissatisfaction with income disparity and the immense wealth tycoons accumulate in what remains, in name at least, a socialist state. China today produces billionaires faster than any other country on earth. Its capital, Beijing, boasts more millionaires than any other world city. The pandemic has proved to be a boon, with China’s billionaires’ wealth swelling by some $1.94 trillion, not least among tech bosses, whose business models are often well-suited to lockdown conditions.

Huang’s departure from Pinduoduo came just as the death of workers at the firm reignited fierce debate about China’s notorious “996”— 9 a.m. to 9 .p.m., six days a week—work culture, which almost every Chinese tech tycoon has defended. One woman collapsed and died after finishing work at 1:30am. Another worker killed himself on a visit to his parents. One employee claims he was fired for raising concerns about overwork. Pinduoduo did not respond to requests for comment from TIME but has said in statements that employees would be offered psychological counselling. The controversy led China Central Television to cancel a partnership with the company for its Spring Festival Gala, the world’s most-watched television show.

Read more: How TikTok Found Itself in the Middle of a U.S.-China Tech War

Delivery companies like Meituan and Alibaba-owned Ele.me have also come under the microscope. A state-run television documentary on riders’ harsh conditions and paltry wages—reported to be as low as 41 yuan ($6) for a 12-hour shift—highlighted the demands placed on China’s estimated 3 million delivery staff, who kept China fed during lockdown and have been hailed as heroes of the pandemic. One delivery driver recently set himself on fire to protest unpaid wages while at least one other collapsed and died from apparent overwork.

Tech entrepreneurs were seen as heroic disruptors in recent years, railing against an ossified planned economy. But as the billionaire class has bloated, perceptions have changed. Maoist slogans decrying them as “capitalist bloodsuckers” have begun reappearing on social media. China’s tech titans have spent so long “fighting the system,” says Rui Ma, that they are blind to the fact that they themselves have become the overlords, entrenched elites, stunningly out of touch with the masses. “When you’re in that position, with the most power and money, you’re now also the biggest target.” 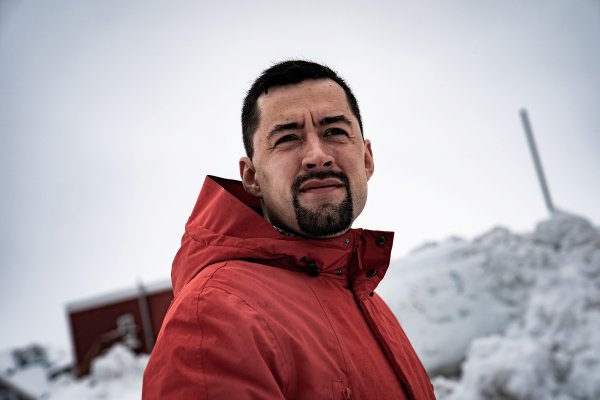 The U.S. Has Had a Military Presence in Greenland Since 1941. A Young New Leader Wants Much More
Next Up: Editor's Pick