A month into New York Governor Kathy Hochul’s term, Andrew Cuomo has become a ghost. Almost nobody in the governor’s office mentions his name. In a recent hour-long interview, Hochul called him only “this past governor,” when she referred to him at all. When I asked about a model of a ship on display in her New York City office, a staffer informed me that it was “a him thing.”

Until August, most of New York politics had been a “him thing.” The Empire State is usually dominated by wannabe emperors, men with massive egos like Cuomo or Eliot Spitzer. The state that birthed the women’s suffrage movement has never elected a woman as governor, or mayor of New York City. Even though she served for six years as Cuomo’s lieutenant, Hochul—a trim 63-year-old Irish Catholic with a voice like Caroline Kennedy and a near-encyclopedic knowledge of the Buffalo Bills—is in many ways an accidental governor.

She found out she was getting the job the same way the rest of the world did: while watching Cuomo announce his resignation on live TV. Like many New Yorkers, Hochul had assumed that the three-term governor would dig his heels in despite becoming hopelessly embroiled in a sexual harassment scandal. She watched Cuomo’s press conference with her aides in her Buffalo home office, then stood up, went into a small guest bedroom nearby and shut the door.

“I’m not overly religious, but I dropped to my knees,” she says. “And I said: God give me strength, and courage, and wisdom.” Hochul thought about how her tenure—however long or short it might be—would be scrutinized as a blueprint for how other women might handle executive roles. “And then I got up, walked in and said, ‘Let’s do this.’”

Hochul has less than a year to make her point before the 2022 governor’s race. “I need to prove that women can do this, and excel at it, and show that we govern very differently, but just as effectively,” she says. “We dream just as big. Our vision is just as bold. And we’ll get it done in a way where people can share in the success.”

You could look at Hochul’s career as a series of fortuitous accidents, the story of a woman who often seems to have found herself in the right place at the right time. She grew up as one of six kids in a working-class family in Buffalo, with a steelworker father and an “always pregnant” mother. Hochul started volunteering at the local Democratic headquarters as a teenager, but never considered elected office herself, mostly because there were so few examples of women who had done it. “I was preparing myself to be the best staffer,” she recalls. Her dream was to be a top aide to a Senator.

Like so many women in politics, Hochul’s career would be singed by casual sexism, interrupted by motherhood, and shaped by the decisions and failures of flawed men. She became Erie County clerk, thanks to an appointment by then governor Spitzer, and later won a Buffalo–area congressional seat in a special election held when Republican Representative Chris Lee resigned after being caught sending shirtless photos to a woman he met on Craigslist.

Given that Hochul has ascended to the governor’s mansion because of allegations of sexual harassment, I asked whether she had ever been sexually harassed herself. “I don’t want to say any slight I had ever rises to what so many others have gone through,” she said. But still, there was that one time.

As a young associate at a law firm, she was asked to host a client from Japan because the partner wasn’t available to take him for dinner. At first she was excited for the opportunity. But “it became clear to me during dinner that he thought I was there … for him.” After dinner, Hochul recalls, “he was angry at me that I didn’t go upstairs.” She went back to her law firm and told them, “Don’t ever do that to me again.”

Hochul soon moved on to staff jobs on Capitol Hill, putting her on a path to achieve her teenage ambitions. While working as an aide to New York Senator Daniel Patrick Moynihan, she was so busy she didn’t bother to wonder why she wasn’t feeling well. “I didn’t know I was pregnant for about three months,” she says. “I literally went white-water rafting, not knowing I was pregnant.” She says her experience gives her a special perspective into the unfairness of a new law in Texas that bans abortion beginning at six weeks, long before many women know they’re expecting.

Unable to find good childcare options, Hochul quit the Hill after becoming a mother, and later moved back to upstate New York, where she raised her two kids. But she stayed political. In 1994, she was appointed to a vacant seat on her local town council, then was tapped to fill another vacancy as Erie County clerk in 2007, where she forged connections in the New York political hierarchy. New York Democratic Party chair Jay Jacobs recalls once traveling to Erie County for a state convention, expecting the county clerk’s office to send “some -office worker” to pick him up at the airport. Instead, he recalls, Hochul herself volunteered. In 2011, she won the special congressional election in her conservative district in an upset, and barely lost her re-election bid a year later, buffeted by unfavorable redistricting and GOP backlash to the Affordable Care Act. In 2014, Cuomo chose her as his running mate in part because he wanted to balance his ticket with a woman from upstate New York.

Lieutenant governor of New York is a largely ceremonial role, and Cuomo kept her at arm’s length. But Hochul made a point of traveling the state, building connections and making friends. When a new crop of young women arrived in the New York legislature in 2019, Hochul took them out for chips and guacamole in Albany and gave them advice on floor speeches (never read from a piece of paper) and luggage recommendations (her Away suitcase is always reliable).

But New York is not known as a place where nice ladies finish first, and just a month into her tenure, Hochul’s rivals are circling. Potential Democratic challengers are whispering about her administration’s ties to lobbyists, how much she may have known about Cuomo’s scandals and some of her past policy positions, like her 2007 opposition to issuing driver’s licenses to undocumented immigrants. (Hochul has said she’s “evolved” on this issue.) Hochul, who once held an “A” rating from the NRA, knows primary challengers will criticize her as insufficiently progressive. “They did it in 2014: I won. They did it in 2018: I won. They can do it again, and I’ll win,” she says.

In her first months in office, Hochul says she will focus on three major priorities: curbing COVID-19, delivering relief money to New Yorkers and investing in infrastructure. She’s replaced many of Cuomo’s allies with an experienced staff, says veteran New York state senator Liz Krueger. “And she’s getting them to work for her apparently on a day’s notice.”

When she’s not visiting New Yorkers whose homes were destroyed by Hurricane Ida, the governor is reading Accidental Presidents, about Chief Executives, from Teddy Roosevelt to Lyndon Johnson, who stepped into power at a moment’s notice. “These are stories of other people thrust into the roles who have to prove themselves very quickly to people who don’t know them,” Hochul says. “That’s my life right now.” —With reporting by Simmone Shah 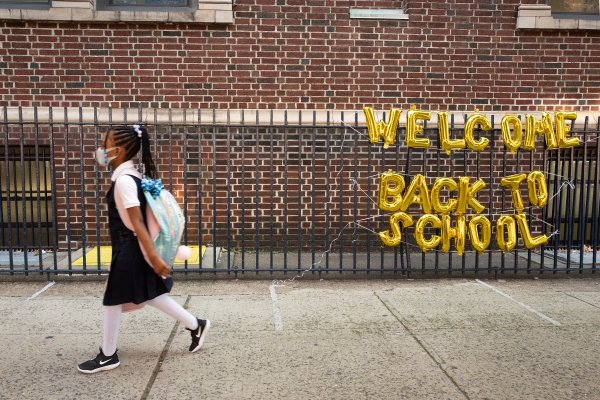