Andrew Cuomo Is Defiant, But He Could Face Serious Legal Consequences

People participate in a protest against N.Y. Governor Andrew Cuomo and protest for a moratorium on evictions on August 4, 2021 in New York City. The dual issues arose after New York Attorney General Letitia James investigation concluded that Governor Cuomo did sexually harass multiple women and the eviction moratorium instated by the CDC due to the COVID-19 pandemic is slated to elapse at the end of the month.
Stephanie Keith-Getty Images
Ideas
By Barbara McQuade
McQuade is a professor at the University of Michigan Law School, a former U.S. Attorney for the Eastern District of Michigan and an NBC News and MSNBC legal analyst.

As Andrew Cuomo fights for his political life, his legal troubles cannot be ignored.

On Tuesday, New York Attorney General Letitia James announced the results of the independent investigation Cuomo had requested, concluding that the governor “sexually harassed a number of State employees through unwelcome and unwanted touching…and sexually suggestive comments…part of a pattern of behavior that extended to his interactions with others outside of State government.” The highly respected private attorneys hired by James documented their findings of sexual harassment of 11 women whose stories they found to be credible. They also described a culture of “bullying, fear and intimidation” in the governor’s office.

Following the announcement by James, Cuomo remained defiant as he faced potentially grave legal consequences. The report merited a criminal referral to the Albany County District Attorney. One incident, in which an executive assistant alleged that Cuomo groped her breast in November, could amount to a misdemeanor crime of sexual assault, punishable by up to a year in prison, though it faces the often uphill battle in criminal cases of workplace sexual assault of proving guilt beyond a reasonable doubt.

Perhaps the greater risk to Cuomo are the findings of violations of civil statutes, properly viewed as civil rights violations. The investigators concluded that Cuomo violated state and federal laws prohibiting sexual harassment in the workplace by creating a hostile work environment, a finding that exposes him and the state to potential liability for money damages. The work of the Attorney General’s office is done, but the women who were the targets of Cuomo’s abuse may bring their own lawsuits. And in civil cases, the burden of proof is the less-stringent preponderance of the evidence standard.

Title VII of the Civil Rights Act of 1964 prohibits discrimination in the workplace “on the basis of sex.” Courts have interpreted this statute to include gender-based harassment. The New York State Human Rights Law contains similar provisions. Courts consider not only acts tied to gender, but also acts that are facially neutral if the harasser engaged in multiple acts of harassment, with some tied to gender and some not. So if a supervisor makes sexually suggestive comments to an employee, and then demands that she repeatedly sing “Danny Boy” for him, as the report says Cuomo did to one of his aides, that conduct may be considered as part of the full picture of a hostile work environment.

Hours after James announced the results of her team’s five-month investigation, Cuomo issued a recorded statement in which he denied any “inappropriate” touching or sexual advances. His spin may work in the political arena, but seems unlikely to succeed in court. He used a defense lawyer’s favorite trick of focusing on the least egregious of the claims—unwelcome hugs and kisses—to deflect attention from the more shocking allegations of sexual contact, as if that is what the fuss is all about. Explaining that he learned from his mother and father that hugs and kisses “convey warmth,” Cuomo showed photos of himself embracing “all kinds of people.” But it is not just hugs and kisses that the women are complaining about, but groping, touching of buttocks, running his fingers down their spine, stomach or chest and making sexually suggestive comments. Rather than feeling warmth, the women reported feeling “shocked,” “humiliated,” “deflated” and like “some little doll for the Governor of New York.” Cuomo’s analogy to family-friendly hugs ignores the more serious conduct. A court won’t.

Cuomo’s defense is also to argue that other public officials hug and kiss, too, even sharing photos of leaders such as President Joe Biden and Vice President Kamala Harris embracing others. This defense also falls short. Try telling a police officer who has pulled you over that he should overlook your speeding because everyone else is doing it. Significantly, none of the photos showed any of these officials with their hands on someone’s breast or buttocks or running their fingers down someone’s back or across their chest.

Federal and state law also prohibit retaliation against an employee for reporting sexual harassment. The report concluded that after one former employee, Lindsay Boylan, made public allegations of sexual harassment, Cuomo’s senior staff transmitted confidential files about her to reporters in an effort to undermine her credibility, or what she referred to as their “destroy Lindsay phase.” The report documents the involvement of a number of staffers, male and female, in this effort. In his public remarks, Cuomo attacked the investigators for criticizing the work of female supervisors, arguing that they were using a double standard that condemns strong women. Discrediting the investigators for this finding is somewhat ironic in light of the fact that the finding was itself based on effort to discredit Boylan. This defense amounts to saying, “I’m not sexist—you’re sexist!” Cuomo also blamed the findings on people who are “using this moment for politics.”

Attacking one’s accusers is not an effective legal strategy. If you rob a bank, it doesn’t matter that the teller didn’t like you. You’re still guilty of bank robbery. Instead, a case is assessed on the strength of the evidence. When 11 different people are all telling similar stories, they tend to corroborate each other. 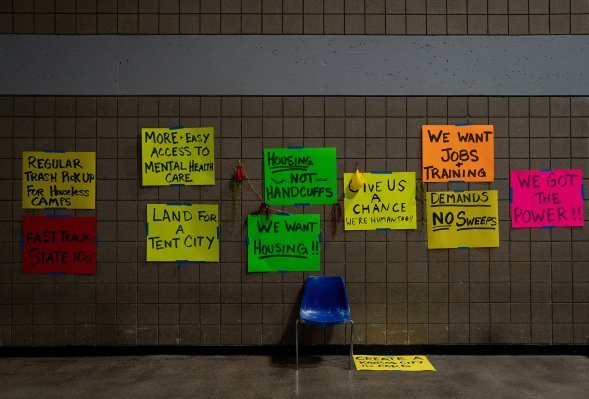 I Lived in My Car and Now I’m in Congress. We Need to Solve America’s Housing Crisis.
Next Up: Editor's Pick