Here Are the 8 New Books You Should Read in October

The best new books arriving this month dive deep into a range of topics, from a wrenching portrait of homelessness and poverty in America to the dissection of a marriage and its eventual unraveling. October welcomes the return of best-selling novelist Amor Towles as well as a posthumous book from British spy master John le Carré. Between thought-provoking nonfiction, thrilling examinations of fictional relationships and more, there’s something for everyone this month. Here, the best new books to read this October.

In her debut book, Pulitzer Prize-winning journalist Andrea Elliott tells the harrowing story of a girl’s coming-of-age against the backdrop of the homeless crisis in New York City. Invisible Child traces almost a decade of Dasani Coates’ life, beginning in 2012 when she lived in a Brooklyn shelter at 11 years old. As she grows older, Dasani is forced to decide whether to keep her family intact or attend boarding school and leave them behind. Through following her journey, Elliott crafts an intimate exploration of poverty and racism in the U.S., as well as a portrait of a young person’s resilience.

Right Within: How to Heal From Racial Trauma in the Workplace, Minda Harts (Oct. 5)

In 2019, Minda Harts debuted The Memo, a career guidebook specifically written for women of color. Her follow up is a self-help book tailored for the same readership, this time offering actionable advice on how to heal from racial trauma that occurs in the workplace. Incorporating guidance from therapists and faith leaders, Harts takes a comprehensive look at what this trauma can look like and provides strategies for how to talk about it. Moving beyond how to heal, Harts also points toward the future and shares tactics to help women of color succeed in their workplaces.

While looking through her late mother’s belongings, Anna makes some curious discoveries about her father, who has never been part of her life. His student diaries reveal his involvement in radical politics in 1970s London. She learns that he became the president of a country in West Africa—and that he’s still alive. The revelation comes amid Anna’s own identity crisis—she’s no longer with her husband, her daughter’s grown—and sends her searching to find out who and where her father really is. Author Chibundu Onuzo offers a stirring narrative about family, our capacity to change and the need to belong.

It’s June 1954 and 18-year-old Emmett Watson has just been released from a juvenile work farm. He served 15 months for involuntary manslaughter and is now back at his childhood home in Nebraska, where he’s planning to pick up his little brother and hit the road, aiming for a fresh start in California. But the brothers’ plans are quickly thwarted by the surprise arrival of two escaped inmates, and soon the group is instead off to New York City. Flipping between perspectives and taking place over just 10 days, The Lincoln Highway showcases the talent of Amor Towles, author of A Gentleman in Moscow and Rules of Civility, as he guides readers through a vivid and engrossing cross-country road trip.

In his nonfiction debut, writer and editor Jay Caspian Kang dissects the loneliness of the Asian American experience. The son of Korean immigrants, Kang combines his personal family history with deft reportage in a provocative and sweeping examination of racial identity, belonging and family. “There are still only two races in America: Black and white,” he writes. “Everyone else is part of a demographic group headed in one direction or the other.”

Arriving almost a year after his death in December 2020, John le Carré’s thriller promises to be a fitting final installment in his 60-year career as an espionage novelist. Silverview is a classic le Carré spy tale. In it, a bookseller in an English coastal town is unnerved by the presence of a new visitor to his shop, someone who knows a bit too much about his familial history. In London, news of a potential leak sends a spy chief to the same seaside town. What ensues is a story of surveillance, loyalty and betrayal.

In Asali Solomon’s searing satirical novel, two middle-aged Black women who dated in college are thrown back into each other’s orbits after losing touch for years. Liselle is planning a dinner party following her white husband’s failed bid for the state legislature. When she learns that he might be indicted for corruption, she becomes consumed with questions about everything she thought she knew and leaves a message for her old friend and ex-lover Selena, who lives across town. Solomon flips between past and present, and through describing the women’s time together and apart, interrogates the conversations and intimate moments that shape a relationship.

Buy Now: The Days of Afrekete on Bookshop | Amazon

Pulitzer Prize winner Elizabeth Strout, author of Olive Kitteridge and My Name Is Lucy Barton, returns to the world of the latter in her new novel, Oh William!. Strout explores Lucy’s relationship with William, her ex-husband and the father of her two adult daughters, as a newly discovered family secret ties the divorcees closer together. It’s a story about marriage, mystery and the revelations about humanity that can arise in an instant. Like the rest of her acclaimed fiction, Strout’s latest is a quiet domestic drama that tackles the thorniness of everyday existence in incisive and at times heartbreaking terms. 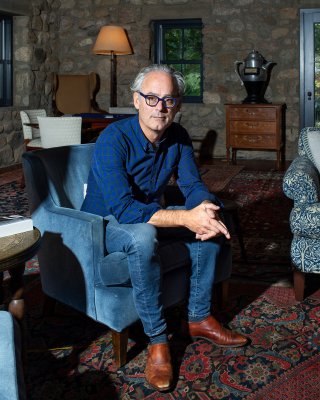 The Overlapping Worlds of Author Amor Towles
Next Up: Editor's Pick