Amor Towles, the best-selling author of Rules of Civility and A Gentleman in Moscow, prepares to release his third novel, The Lincoln Highway.
Isabel Magowan for TIME
By Karl Vick/Garrison, N.Y.

Amor Towles had never actually been beneath the vaulted ceiling of an Adirondack lake house when he described the one in his 2011 debut, the best-selling Rules of Civility. He could only imagine the appeal of such an exalted communal space—“this great room where the family gathers”—until, while shopping for a second home with the money from that book, he found himself touring a property an hour and a half north of Manhattan. “I was like, This is it!” says Towles, throwing his arms toward a 30-ft. ceiling that, like the glistening lake outside, now belongs entirely to him. “It was this weird thing where I was kind of buying the living room that I had written about,” he says. “Which, in a Stephen King novel, would end badly.”

In the storybook life of Amor Towles, however, the new owner lays down thick Oriental rugs (thicker still where they overlap), sets his laptop on a long oval table by floor-to-ceiling windows and—with wife, son, daughter and a nephew within earshot—rides out a pandemic writing a new book.

The Lincoln Highway for the most part steers away from the upper-class milieu of Rules of Civility, which tracks the ambitions of a winning young woman in 1930s New York City, and 2016’s even bigger hit A Gentleman in Moscow, in which an aristocrat is sentenced to live in a luxury hotel. The new novel, out Oct. 5, begins with a farm boy named Emmett being driven home across Nebraska in 1954 by the warden of a reform school. He did time for accidentally killing a bully, and while he was away, Emmett’s father died and the local bank foreclosed on the family farm. It may sound bleak, but adventure awaits. There are stowaways in the trunk of the warden’s car who want to take the story in one direction. Tugging it in another is Emmett’s kid brother Billy, who has stumbled on a cache of postcards their mother sent after disappearing from their lives years earlier.

Towles sought out vintage postcards from specific towns after realizing they would form a trail in the new book.
Courtesy Amor Towles

“These are the postcards,” Towles says, spreading across the table a stack of vintage cards he began searching out after the idea occurred to him. The top one depicts a motel in Ogallala, the mother’s first stop after leaving her family. Next, Towles pulls from a drawer the British army officer’s wristwatch that shows up in two of his novels.

The author may set his stories in a specific past, but he regards history as only suggestive, like the backdrop in an opera. The foreground, on the other hand, must be as concrete as the artifacts that bridge the worlds he creates. “If it’s a Chekhov play, and they are sitting around the table, and there’s tea on the table, that stuff can’t feel fake,” he says. “When someone slams the cup down, it’s got to sound like china hitting the table.”

In many ways, Towles writes what he knows. The upbringing outside Boston that he calls “middle class” involved private school, then Yale and Stanford. “My great-grandparents,” he allows, “would have been very comfortable in Edith Wharton’s novels.”

Towles started writing in first grade, and years later at a Yale seminar was taken aside by Paris Review co-founder Peter Matthiessen, who saw a talent the two made a pact to cultivate. So when Towles broke the news that to please his father, a banker, he was going to work in finance, his mentor was “furious.” America’s finance industry is notorious for skimming the brightest minds from every field. “The people I’ve seen go to Wall Street do not come back,” Towles remembers Matthiessen saying. “So you should assume that at this moment, you have turned your back on writing for the rest of your life.”

While making his first fortune as a partner in a boutique investment firm, Towles would occasionally see Matthiessen. “He was the Jacob Marley in my life. The chains were clanking outside the door.” After a decade, convinced that if he did not resume writing he would reach 50 “bitter and a drinker,” he found time over seven years to write a novel that he ultimately concluded was bad. But recognizing that the best writing in it had been done in the first year, he engineered a fix: spend as long as necessary to outline a story, but just 12 months getting down the first draft.

The idea was “to try to capture the freshness of the imaginative moment, where it’s all sort of exciting and interesting and revealing itself,” he says. The detailed outline is crucial. It lets him get his bearings when he surfaces from wherever he goes to produce the sinuous, frequently charming prose that, like Towles, may be best described as cosmopolitan. “For me, it’s very much about this thread of language, and how it’s unfolding and referring to itself as it goes,” he says.

The author’s home in Garrison, N.Y., once a gentleman’s hunting lodge, came with the lake.
Isabel Magowan for TIME

He took the time thing to heart. Rules of Civility covers one calendar year, which is precisely how long he took to write it, starting on Jan. 1, 2006. He was determined that The Lincoln Highway should unfold over 10 days, though at 600 pages the first draft required 18 months, as did A Gentleman in Moscow.

The new book’s title, referring to the nation’s first transcontinental highway, seems to promise a road trip. “It’s more accurate to say it’s a journey book,” Towles says. Emmett and the stowaways—a fast-talking rogue known as Duchess and his woebegone companion, Woolly—are all 18, the age at which, Towles notes, having received advice from all quarters, a young person begins making decisions about his own life.

Lake sparkling in the September morning light, the tour continues. Behind the main house, on the wall of his underused study, hangs a framed map of Yoknapatawpha County, invented by William Faulkner and populated with characters apt to pop up in any of his books. Joyce employs the same trick, as does the espionage writer Alan Furst, whose best work offers satisfactions similar to Towles’—summoning eras we think of in black and white, partly by evoking the films of the time (some of which Towles name-checks in the book), while offering the singular pleasures of literary fiction.

Before publishing his first best seller, Towles was a partner at a Wall Street firm.
Isabel Magowan for TIME

Woolly turns out to be short for Wolcott; his uncle was in Rules of Civility. Towles, a vivacious sort, visibly brightens recalling the moment when it occurred to him that the nephew would be the second boy emerging from the trunk of the warden’s car.

“No reader has to ever notice it for me to be happy about it,” he says. “You have a story and suddenly a person’s appearance opens the door to that other story.” Or, as the case may be, to a great room. 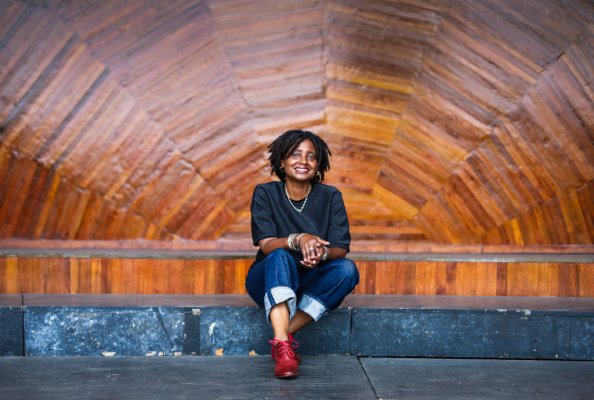 Tracy K. Smith on 'Such Color', Joy in Poetry and Inquiry
Next Up: Editor's Pick