Speaker of the House Nancy Pelosi meets with reporters to discuss President Joe Biden's domestic agenda including passing a bipartisan infrastructure bill and pushing through a Democrats-only expansion of the social safety net, the at the Capitol in Washington, on Sept. 8, 2021.
J. Scott Applewhite—AP
By Philip Elliott

House Democrats yesterday finished penning a 2,600-page bill that finally outlines the specifics of their ambitious “soft” infrastructure plan that won’t attract a single Republican vote. But no one was really rushing to Schneider’s for bottles of bubbly. For a party ready to spend $3.5 trillion to fund its social policy agenda, there were plenty of glum faces on Capitol Hill.

In fact, one key piece of the legislation—a deal that would finally let Medicare negotiate lower prices with drug companies—fell apart in the Energy and Commerce Committee when three Democrats voted against it. It found resurrection a short time later when Leadership aides literally plucked it from the Energy and Commerce team and delivered it to the Ways and Means Committee for its approval instead. Even there, though, one Democrat voted against it, saying the threat it posed to pharmaceutical companies’ profits would doom it in the Senate. “Every moment we spend debating provisions that will never become law is a moment wasted and will delay much-needed assistance to the American people,” Rep. Stephanie Murphy of Florida later argued.

Put another way? Brace for some nasty politics over the next two weeks as House Speaker Nancy Pelosi tries to get this bill to a vote before the budget year ends on Sept. 30. And those 2,600 pages had better be recyclable.

Democrats can only afford three defectors if they want to usher this bill into law, and they’re perilously close to failure. So far, five centrist Democrats in the House have said they prefer a scaled-back version of the Medicare component. But if Pelosi gives the five centrists that win, she risks losing the support of progressives who are already sour that things like a punitive wealth tax and the end to tax loopholes aren’t present in the current version of the bill.

As it stands now, letting Medicare negotiate drug prices would save the government about $500 billion over the next decade. The scaled-back version doesn’t have an official cost, but a very similar version got its score in the Senate last year: roughly $100 billion in savings. Because Democrats are using a budgeting loophole to help them avoid a filibuster and pass this with bare majorities, that $400 billion gap matters a lot more than on most bills. Scaling back the Medicare savings means they would also have to scale back their overall spending on the bill—a big line in the sand for progressives who say they’ve already compromised too much.

All of this, of course, comes as President Joe Biden and his top aides in the White House have been trying to get Senate centrists onboard. Just yesterday, he met separately with Sens. Kyrsten Sinema and Joe Manchin, fellow Democrats who have expressed worries about the $3.5 trillion price tag but have been vague about what exactly they want to cut back on. With the Senate evenly divided at 50-50, and Vice President Kamala Harris in position to break the ties to Democrats’ victories, any shenanigans from those two independent thinkers scrambles the whole package.

Oh, and that other bipartisan infrastructure plan that carries $550 billion in new spending? It’s still sitting on the shelf in the House. Pelosi said she’d bring it to the floor only when the bigger—and entirely partisan—bill was ready. And there’s plenty of grumbling about that package, too.

If this is all beginning to sound like a scratched record that keeps repeating, it’s because this has become something of a pattern here in Washington. Things look pretty grim for legislation in town these days, despite Democrats controlling the House, the Senate and the White House. Their margin for error is literally zero, and so hiccups from a half-dozen centrists can forewarn a doomed agenda.

So far, Pelosi has been a master of holding the line on crucial votes and has managed to maneuver her team to victories, including on an earlier pandemic relief package that passed with only Democratic votes. Now she’s trying again, but the clock is ticking, and $3.5 trillion is an eye-popping sum of money that rivals the spending the United States unleashed to close out World War II.

Oh, and one more thing: the nation’s credit card is within weeks of becoming maxed out. And Republicans say they’re not going to up the limit, leaving Democrats to figure out how to do that at the same time. Even though a boost to the debt ceiling will cover money already spent—much of it during the Trump era—the GOP is going to leave Democrats holding this vote alone and won’t “facilitate” any change to D.C.’s borrowing power. Which adds another item to the tricky list of tasks facing Democrats on the Hill over the next two weeks. 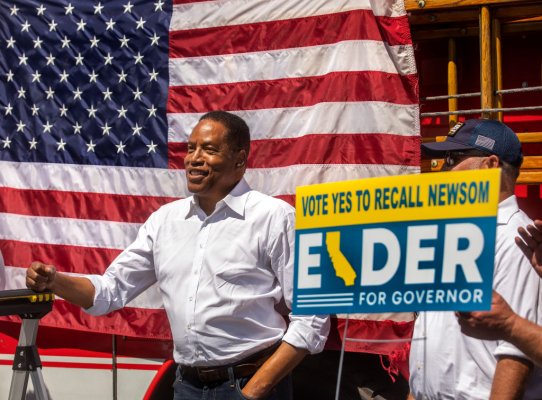 How Trump Helped Dems Win the Calif. Recall
Next Up: Editor's Pick