The Best, Worst and Wildest Moments of the 2021 Emmy Awards

The 73rd Primetime Emmy Awards were live, in-person and as gloriously awkward and frustratingly imperfect as ever. Host Cedric the Entertainer opened the show with a montage of some favorite TV moments from the last year. Then Cedric, Lil Dicky, LL Cool J and Rita Wilson rap-sang a TV-themed version of the late Biz Markie’s “Just A Friend” while Billy Porter, Tracee Ellis-Ross, Mandy Moore, the cast of Hamilton, Allison Janney, Ken Jeong and Michael Douglas clapped along. It was the perfect reminder that despite being well into our second pandemic year, the Emmys are back in all their ridiculous, celebrity-fueled televised glory.

Here are some of the best, worst and wildest moments of the 2021 Emmy Awards.

While presenting the very first award of the evening, Seth Rogen was clearly nervous about the show’s COVID-19 protocols. “There are way too many of us in this little room,” he said, noting that it was supposed to be outdoors, but instead was in a “hermetically-sealed room” that he clearly wasn’t enjoying. He cracked, “It’s more important that we have three chandeliers than that we make sure we don’t kill Eugene Levy tonight.”

When Hannah Waddingham won for her role as team owner Rebecca Welton in Ted Lasso, Juno Temple, who plays her onscreen best friend Keeley Smith, went over the top celebrating her win, even though they were competing against each other. It was like a bonus scene from a future episode of Ted Lasso.

Ken Jeong presented the award to Saturday Night Live outside of the venue after getting fake locked out for not having the proper COVID paperwork and the security guard finding a bottle of Ivermectin from a “Joe Rogan swag bag.”

When the entire Supporting Actor in a Comedy category was made up of the cast of Ted Lasso. There were other shows with other stars, right? (Hello, Bowen Yang and Carl Clemons-Hopkins, whose red-carpet look, by the way, deserved to win its own category.)

When real human Brett Goldstein accepted the award for Best Supporting Actor for his work in Ted Lasso, he swore so much that a huge chunk of his speech was bleeped. Did he accept the award as his foulmouthed character Roy Kent or has he actually just become Roy Kent?

Kate Winslet got a threepeat in this category. Julianne Nicholson gave a heartfelt nod to her Mare of Easttown co-star in her acceptance speech. That was seconded by Evan Peters, who screamed his thanks to his costar “Kate Winslet for being Kate Winslet!” Mindy Kaling rounded things out by joking that Winslet wasn’t British and everyone knows her Mare of Easttown accent was her real one.

Gillian Anderson beamed in from London to accept her award for her portrayal of Margaret Thatcher on The Crown. May we all be inspired to have the confidence of an American auditioning to play one of the most famous prime ministers on a British show—and then win an Emmy for it.

Read More: Why Is Margaret Thatcher Always Crying in The Crown?

Tobias Menzies wasn’t on-hand to accept his award for The Crown, which made it feel even more frustrating that the late Michael K. Williams didn’t win for Lovecraft Country.

While John Oliver was accepting the award for Last Week Tonight he noted, “I think like many of us in the room I was rooting for Conan, so this is bittersweet. Thank you, Conan, for 30 years of inspiring comedy writers.” O’Brien ended his three-decade run as a late-night host in June.

After the cast of Schitt’s Creek walked out to a standing ovation, Dan Levy noticed a problem: “There’s nothing on the prompter.” Soon Eugene Levy admitted that he had started a small war with the show’s writers and the result was a charmingly ridiculous bit that felt like a little extra time with the Rose Family.

Read More: Catherine O’Hara Finds Humor in the Gulf Between Perception and Reality

Remember [what felt like] 40 years ago when a fly landed on the head of then-Vice President Mike Pence during a debate with Kamala Harris? The writers at the Emmys did and wrote a whole sketch that ended with the fly yelling, “All flies matter!”

When Quantum Leap’s Scott Bakula, The New Girl’s Zooey Deschanel, Seinfeld’s Jason Alexander, How I Met Your Mother’s Alyson Hannigan, and The Wonder Years’ Fred Savage bemoaned their lack of Emmys, Cedric brought out Dr. Phil. He had some sage advice for the stars: Get yourself booked on Ted Lasso or The Crown!

Worst Use of Play-Off Music

Jean Smart had a lot to talk about, including thanking her co-stars and writers on both Hacks (for which she won Best Lead Actress in a Comedy Series) and Mare of Easttown (for which she was also nominated), congratulating the newlywed head writers on Hacks, thanking her support system, and noting the recent loss of her longtime husband Richard Gilliland. But that didn’t stop the producers from trying to play off a legend.

The White Lotus standout gave her most Jennifer Coolidge performance while presenting the award for Lead Actor in a Comedy Series. It was so good that if you could give Emmys for Emmy presentations, Jennifer Coolidge would win. (Many on Twitter pointed out that she’d better be back onstage a year from now, minus the presenter’s envelope and plus a statuette for her work on Mike White’s summer hit on HBO.)

Read More: The White Lotus Is the Must-See Show of the Summer

Best Way to Stick it To Your Former Boss

In his acceptance speech, Ted Lasso’s Jason Sudeikis noted that his former Saturday Night Live boss Lorne Michaels had slipped out to go take “a dump.” Hopefully Michaels has a sense of humor?

Best Way to Stick to Your Sorta Boss

When the head honcho of the Television Academy took the stage, a ruckus arose and the audience could be heard loudly cracking up. When the cameras finally cut to the cause of the commotion, it turned out to be Conan, loudly and proudly saluting the man and not stopping until all eyes were on him. As Wanda Sykes tweeted, “Conan is giving no F’s tonight!”

When Debbie Allen took the stage to accept the Governor’s Award, the producers gave her a countdown clock. She was having none of it. “Turn that clock off, I ain’t paying no attention to it,” said the multi-hyphenate star of Fame, A Different World and Gray’s Anatomy. “Turn it off! Turn it off!” She got out her entire speech but deserved so much more, particularly in light of what happened next…

When Scott Frank was delivering his acceptance speech for Outstanding Directing for a Limited or Anthology Series or Movie, for The Queen’s Gambit, the orchestra attempted to play him off three times. He ignored them, told them to knock it off, and talked right through it as if he were entitled to more time on stage than anyone else, including Debbie Allen. It was one of the most lambasted moments of the evening on social media.

When Michaela Coel finally won an award for the brilliant I May Destroy You, she nearly collapsed at her table in shock and excitement, which is exactly what most of us would do. It’s worth noting that her acceptance speech was pure poetry that should be printed out and handed to writers everywhere. (Read it here.)

Onstage presenting yet another award to the decorated Mare of Easttown, Beanie Feldstein noted that she is “so proud of what women are achieving” in Hollywood and Sarah Paulson added, “…And for only 70 cents on the dollar!” Lest we forget the pay gender gap that continues to plague far more than just Hollywood.

When Olivia Colman won for The Crown she said something apparently potty-mouthed while cheering on Michaela Coel, but thanks to bleeping we may never know what she said. (Though one Australian reporter user tweeted what Colman allegedly said, thanks to an apparently bleep-less Australian broadcast.)

While collecting the award for his Election Night special, Stephen Colbert gave his most heartfelt gratitude to Ted Lasso and Last Week Tonight “for not being in this category.” In the related sub-category of Best Staff Addition, when Colbert’s staff came on stage to collect their award, Conan decided to walk up and join them.

While the Ted Lasso theme song is fine enough when it plays at the opening of each episode, hearing the first five seconds over and over and over again with every award they won started to have the effect of sounding like Marcus Mumford was screaming directly into the camera.

When The Queen’s Gambit was announced as the winner for best drama series, Twitter collectively groaned, oh no, not that guy again. Luckily Scott Frank wasn’t able to repeat his performance as he wasn’t given the mic.

The award show presentation on the whole was undeniably and refreshingly diverse, but what does that matter when so few winners were? 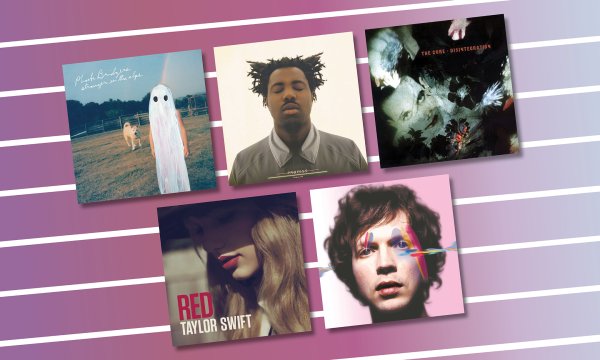 Cry Your Heart Out: The 11 Best Breakup Albums Ever Made
Next Up: Editor's Pick