Emma Raducanu of Great Britain celebrates with the championship trophy after defeating Leylah Annie Fernandez of Canada during their Women's Singles final match on Day Thirteen of the 2021 US Open at the USTA Billie Jean King National Tennis Center on Sept. 11, 2021 in New York City.
Al Bello—Getty Images
By Sean Gregory

Minutes after she clinched what could be the most unlikely Grand Slam victory in the history of tennis, Emma Raducanu, 18, spent a moment taking it all in.

Sitting on the Arthur Ashe Stadium sideline before the trophy ceremony, she laughed and sang along as the near-capacity crowd belted out “Sweet Caroline” while the Jumbotron showed delirious fans waving British flags. Raducanu, the first qualifier ever to win a major championship, is also the first British woman to win a Grand Slam event since Virginia Wade took Wimbledon in 1977. After Billie Jean King handed her the championship trophy, Raducanu carried it around the court, stopping to take pictures with ball boys and ball girls, as well as some admiring fans calling out her name.

Albert Bostoen, a high school senior from Connecticut, managed to slip a piece of a paper with his phone number, Instagram and Snapchat handles to Raducanu’s physiotherapist, imploring him to pass it along to the new US Open champion. “Hey, you miss 100% of the shots you don’t take,” Bostoen says.

Grace Ma, 34, and her friends were draped in the British flag, even though they’re not from Great Britain. They’ve just fallen hard for Raducanu.

“Asian representation!” says Ma, who’s Chinese-American; Raducanu’s mother is from China, and has trained at the Shenyang Institute of Physical Education. “It’s so inspiring to see somebody with your ethnicity make it. It’s so nice to see a new face.”

If Saturday’s match serves as any indication, the future of tennis couldn’t be brighter. For one, the unlikely final between two teenagers—Raducanu and 19-year-old Leylah Fernandez of Canada—put our multicultural world on full display. Raducanu, who outlasted Fernandez 6-4, 6-3, is the daughter of a Romanian father and Chinese mother; born in Toronto, her family moved to Great Britain when she was 2 years old. She’s fluent in Mandarin. Fernandez, who’s from Montreal, has an Ecuadorian father and her mother is of Filipino descent; she’s trilingual, speaking English, French and Spanish.

Between the two of them, four continents can lay claim to Raducanu and Fernandez. Plus, they’re thrilling players.

Raducanu’s game is mature beyond her years. Despite having to win three matches just to qualify for the main draw, and another seven to raise the championship trophy, she never lost her grace and power along the way. She neglected to drop a single set en route to the title, a 20-set winning streak unlikely to be duplicated.

Fernandez is a fighter. In her last four matches, she defeated three of the world’s top five players (Naomi Osaka, Elina Svitolina and Aryna Sabalenka) in three-set epics, while also knocking out a three-time Grand Slam champion, Angelique Kerber of Germany, in three-sets in the fourth round. Though she couldn’t force a third set against Raducanu, Fernandez gave the New York crowd, which adopted her as one of their own, some hope. While facing two championship points on her serve, Fernandez held to make it 5-3 in the second set; with Raducanu’s serving for the match in the next game, Fernandez had break point. Ashe Stadium got so loud that Larry David, sitting in the crowd, covered his ears.

Raducanu, however, called for a medical timeout to clean up a bloody leg. Fernandez seemed to laugh at the timing of Raducanu’s break, but wasn’t bitter about it afterwards. “It’s too bad that it happened in that specific moment, with me with the momentum,” Fernandez says. “But it’s sports, it’s tennis and just got to move on.”

Fernandez is poised to continue her role as fan favorite. During her Open run, Fernandez learned that the more she interacted with and played to the crowd, the more effectively she performed.

“When I was younger I tried to be as calm as possible, just like Federer,” says Fernandez. “I discovered that of myself, that I play a lot better when I’m more outgoing and I’m more using the crowd to my advantage.”

New York will forever remember Fernandez sharing one last message about 9/11 on the 20th anniversary of the terror attacks at the victory ceremony, before Raducanu got her championship trophy.

“I know on this day, it was especially hard for New York, and everyone around the United States,” Leylah Fernandez said. “I hope that I can be as strong and as resilient as New York has been the past 20 years.”

Women’s tennis could be set for a transition, with Raducanu and Fernandez primed to carry the sport into the next decade—or more. Serena Williams remains the game’s biggest draw, but she’s nearing the end of her career: she missed this U.S. Open because of a torn hamstring, and last won a Grand Slam at the 2017 Australian Open. Naomi Osaka has won four Grand Slam titles in her short career, but after a season in which she has been open with her mental health struggles, her future appears somewhat uncertain.

“I honestly don’t know when I’m going to play my next tennis match,” Osaka said after losing to Fernandez in the third round. “I think I’m gonna take a break from playing for a while.”

Raducanu, whose parents both work in the finance industry, won her first major title in just her second Slam event: she made the fourth round at Wimbledon in July just a few weeks after finishing up school exams. She admits that if someone had told her before Wimbledon that she’d be a Grand Slam champion by summer’s end, she wouldn’t have believed it. Though as she’s gotten closer to the final, she’s started visualizing celebrating a victory with her team in the players’ box.

“That’s been playing in my head,” Raducanu says. “A couple of nights I can recall falling asleep to that.”

Serving for match point, she fired a 108 mph ace wide past Fernandez before falling to the ground and placing her hands over her eyes. She lay flat on her back for a few seconds, in disbelief.

“I don’t think I made one serve that wide in the whole match to be honest,” Raducanu says afterwards. “And I was like if I’m going to make it, this is going to be the time. So I literally drove my legs up to that ball toss like never before.”

Three months ago, she was a student. Now, the Queen’s sending her a congratulatory note. After one improbable run, heaping expectations on Raducanu to carry tennis forward may be unfair. But even at 18, she seems preternaturally equipped for the challenge.

“I don’t feel absolutely any pressure,” she says. “I’m just having a free swing at anything that comes my way. That’s how I faced every match here in the States. And it got me this trophy. So I don’t think I should change anything.” 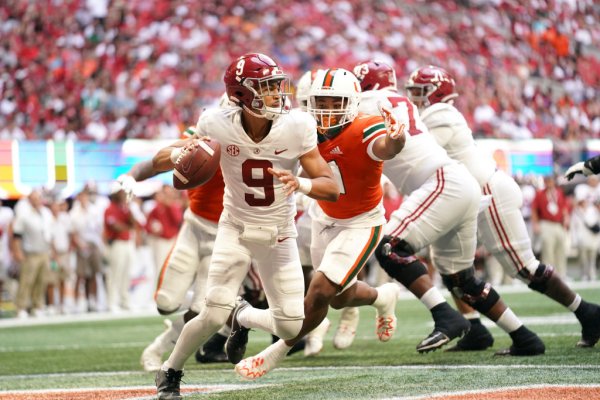 As College Athletes Finally Cash In, Entrepreneurs Also Look to Score
Next Up: Editor's Pick