‘We Were Willing to Give Up Everything.’ Billie Jean King Reflects on Her Legacy and New Memoir All In

In your book, you write, “Even if you’re not a born activist, life can damn sure make you one.” How did you come to this conclusion?

When I was 12 years old, I had my epiphany. I had started playing tournaments to get rankings in Southern California. Everybody who played wore white shoes and white socks, white clothes, played with white balls, and everybody that played was white. And I remember saying, “Where’s everybody else?” I just knew if I ever could become No. 1, I would champion equality the rest of my life. But I knew I had to probably be No. 1, because I knew already at 12 years old that I was a second-class citizen, and I’m white! I knew my sisters of color had it tougher, I knew that others had it tougher, people living with disabilities.

You wrote about how Black tennis star Althea Gibson helped shape the way you saw your future. Your path has provided a way for many young people to see themselves. What do you think the importance of visibility is?

I think you have a chance to make a bigger impact, because you’re reaching more people. I think people have to realize that if you hear our stories—women’s stories, Black stories, brown stories—when you start to hear stories of people as human beings, not that they had a good forehand or backhand, that’s what’s interesting to people.

As a pioneer in women’s professional sports, you often received backlash for speaking out. What do you think of athletes using their platforms to promote social change?

It’s always good to hear people and their opinions. You don’t have to agree with them, but it makes you think, or maybe it’s a wake-up call and you didn’t realize it. With it, though, there’s a responsibility. If you look at the history of how pro tennis started in ’68 and how women were getting shut out, we signed this $1 contract that is the birth of women’s professional tennis the way you know it today. We were all very young at the time, and we decided that we were willing to give up our careers, we were willing to give up everything for the future generations.

It does feel like a very different time now when athletes might be overexposed. I’m thinking specifically about Naomi Osaka, who recently declined to do media because of her mental health.

I know it’s difficult, but I think we need to do a better job of having a rookie school, because I think if you choose to be a professional athlete, that doesn’t mean you just hit tennis balls. I mean, you’re going to have to talk to somebody sometime.

Mental health is definitely at the forefront of conversation right now. What do you think is the best way to ensure that mental health is taken seriously?

I think they need to take care of themselves first. I hope they get help. I think one of the challenges for people in general is that we have trouble asking for help when we need it the most, and then we feel isolated and alone.

What does it feel like to see the work that still needs to be done when it comes to pay equity?

For me, it’s not even close yet. And I’m so frustrated, because I’m really running out of time.

What do you think needs to happen so we can actually achieve pay equity now for sports, but also in general?

Sports are a microcosm of society. Let me ask you, do women writers make as much as male writers?

Well, personally, I’ve been meaning to ask for a raise.

Girls are taught not to do that. Go for it—at least you’ve been asking. My generation never asked, but you know what? Women want the cake and the icing and the cherry on top, just like everybody else, and we have to go for it. 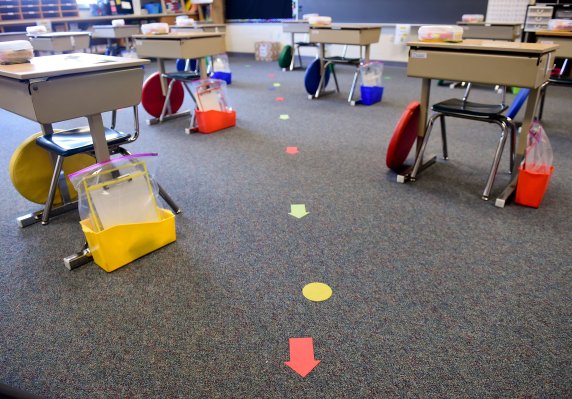 Now Is Our Chance to Rebuild U.S. Public Schools To Address Both Climate Change and Racial Inequality
Next Up: Editor's Pick