A BinaxNOW rapid COVID-19 test made by Abbott Laboratories, in Tacoma, Wash., on Feb. 3, 2021.
Ted S. Warren—AP
Ideas
By Michael Mina and Steven Phillips
Mina, MD, PhD, is the Chief Science Officer of eMed. He was previously assistant professor of epidemiology and immunology/infectious diseases at the Harvard T.H. Chan School of Public Health, Center for Communicable Disease Dynamics; and associate medical director in clinical microbiology at the Brigham and Women’s Hospital.
Phillips M.D.,M.P.H., Vice President Science and Strategy, COVID Collaborative and Fellow of the American College of Epidemiology

The Delta variant has caused a resurgence in COVID-19 cases and deaths, threatening earlier gains made by the Biden Administration in tackling the pandemic. President Biden on Thursday laid out an ambitious comprehensive six-point COVID Action Plan to respond to the variant challenge. It gives appropriate top priority to using executive action to maximize vaccinations and recognizes the direct link between curbing the virus and reopening schools, workplaces, transportation hubs, entertainment venues and other vital segments of our economy.

But on the testing front, despite giving overdue attention to “more available, more affordable and more convenient testing” and committing to procuring 280 million tests, the White House did not seize the moment to deliver a comprehensive national rapid testing plan that would complement its heroic vaccination efforts.

Accessible at-home rapid testing is a strategic tool that if deployed last year would have reduced COVID-19 transmission to a point of potentially eliminating the virus as a public health threat. A plan to ramp up such testing gained momentum at the start of the Biden Administration and it continued to make headlines in the spring. With no no national strategy, however, states and schools received the funding, but they were left to figure out procurement and protocols alone. Nevertheless, as the administration made vaccines its major focus, it seemed to treat testing as more of a penalty for the unvaccinated, rather than using it as an extra layer of protection and providing peace-of-mind for all. There was never a comprehensive federal plan to assure that supply met growing market demand for a convenient and accurate tool that would signal if people were infectious and enable them to take vital precautions to break chains of household and community transmission.

With the early summer pandemic reprieve and a June recommendation by the U.S. Centers for Disease Control and Prevention (CDC) against the need for regular testing for those fully vaccinated, it came as no surprise that Abbott’s highly popular at-home rapid COVID-19 test, the BinaxNow, was projected to be in such low demand that the company instructed its Maine factory to destroy millions of tests before laying off 1,200 workers.

The timing couldn’t have been worse as schools and colleges are now back in person and states are fighting each other for the limited supply of rapid tests. The lack of rapid testing options is causing consternation across a broad swath of the American economy. In a surging fourth wave, virtually all segments of society have had their personal safety unnecessarily jeopardized. This isn’t because people are choosing tests over vaccinations—it’s because they want both.

The newly unveiled Biden COVID Action Plan addresses many of the historical gaps and shortfalls in the deployment of rapid tests. It focuses on expanding production of rapid tests, making them more affordable and accessible, and supports specific use cases in K-12 schools, and sports and entertainment venues. These are all impactful and desirable government interventions. But unless they are managed as elements of a whole-of-government approach, it will fall short of expectations in helping restore our vibrant economy and personal safety and well-being.

One example of the need to take a holistic approach to rapid testing is the unintended disruptive impact of the Biden mandate that workers at large companies get vaccinated or face weekly testing. This may apply to as many as 100 million workers and stands to displace huge unfunded mandated testing costs to the private sector or to the employees themselves. It will also wreak havoc on the national supply chain, limiting test availability for schools and other national priorities as well. The Biden plan allocates $2 billion for 280 million tests. This is a bad deal for American taxpayers. We are over-paying for tests that could be produced for as little as $1 and not getting nearly enough supply on the market to meet the demand.

Read more: Why We Still Need Widespread Rapid Testing Even With Vaccines

The Trump Administration’s Operation Warp Speed for vaccines was successful because the U.S. government recognized early that it had a central catalytic role in harnessing the formidable R&D, manufacturing, commercial expertise and innovation of the private sector. The White House knew that without its leadership and facilitation, market forces alone would not meet the challenge of fast and efficient development, commercialization and use of a leapfrog technology—a pandemic-ending vaccine.

Now we’re at a similar crossroad for rapid testing and we need a U.S. government-led solution that does not rely mainly on market forces to drive COVID-19 policy. Delta is highly contagious in part because viral loads increase very quickly, achieving 1,000 times higher viral load on the first day of detection than earlier variants. Someone can be undetectable in the morning and a super spreader within 24 hours, often before symptoms appear. Inexpensive, easy, fast and accurate at-home tests provide actionable results in minutes, not days. They can be used in or out of the home to provide real-time information on whether someone is infectious. If I’m negative, I go to school; I go to the family birthday party; I go to work. If I’m positive, I stay home and isolate. Individuals, families, parents of schoolchildren, employees, diners—virtually everyone—can markedly increase physical safety and mental well-being by having access to rapid tests. It is a pandemic game-changer.

What does a comprehensive national rapid testing plan look like? It assures sufficient production (hundreds of millions of tests per month—not per year), distribution and access of rapid tests to public and private enterprises and users everywhere, and a robust public health education and marketing campaign that tells people how to use the tests.

The White House proposes to address the supply problem by invoking the Defense Production Act (a policy promise that was announced earlier this year but never came to fruition). Biden’s plan also calls for retailers, such as Amazon, Walmart and Kroger, to sell their tests at a 35% discount, and plans to distribute free tests to homeless shelters and community health centers. But this won’t result in equitable access and use of this life-saving tool for households across the U.S. The current reliance on private sector incentives and mostly retail distribution has caused a two-tier use-case. Those who attend destination weddings can afford to get tested. Those who perform essential services will likely not.

For a nationwide scale-up and distribution of rapid tests, we don’t need to reinvent the wheel. We can look to the U.K., Germany, and other countries that have massively scaled rapid tests as critical public health tools. We must recognize that rapid testing in a pandemic is a public health good and not medicine. The president, in coordination with the CDC, should consider an executive order ensuring that rapid COVID-19 tests are regulated as public health tools and not medical diagnostics. The Biden Administration should treat this with the same prioritization and focus that the prior administration did for vaccines because it’s a natural complement to Biden’s vaccine mandates. This isn’t an either/or situation. Rapid testing is an insurance policy for the vaccination campaign. Vaccines prevent disease but falter to limit the spread of Delta. Strategic widespread use of rapid tests can limit spread and bring outbreaks crashing down in weeks. This will support the vaccine program—the less community transmission, the fewer chances the virus will have to mutate into more contagious and dangerous variants that challenge vaccine effectiveness. Our approach can’t rely on laboratory-based testing where individuals wait days for results—Delta spreads far too quickly.

As Delta continues to wreak havoc, we believe this is the White House’s opportunity to arm every American with the tools to know their infectious status and significantly reduce asymptomatic COVID-19 transmission. Twenty months into this pandemic, we can protect ourselves with the vaccines, protect our loved ones with rapid tests, and finally return to life as we knew it— only if we seize the moment. 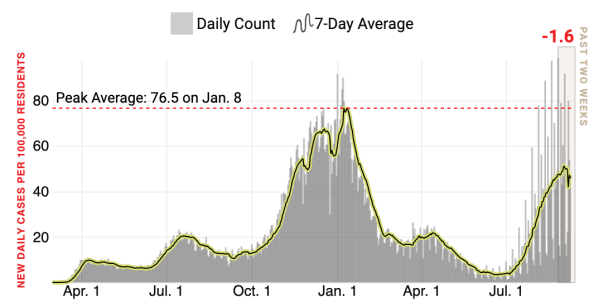 Fourth COVID Wave Could Be Ebbing. The Fifth Might Be Worse
Next Up: Editor's Pick