I Fled Hurricane Katrina When I Was 12 Years Old. We Can’t Forget the Kids of Louisiana Today

Residents ride in a high water vehicle after being rescued from floodwater left behind by Hurricane Ida in LaPlace, La. on Aug. 30.
Luke Sharrett—Bloomberg/Getty Images
Ideas
By Edward Buckles Jr.
Buckles is the director of the upcoming HBO documentary Katrina Babies, which offers an intimate look at the aftermath of Hurricane Katrina and its impact on the youth of New Orleans

In the aftermath of Hurricane Ida, it’s hard to think of my childhood in New Orleans. I don’t remember doing anything without my close-knit family. We would meet on a random weekday to sing “Happy Birthday” to one another or my mom would sew matching outfits for us to wear so we’d be fresh on Easter Sunday. We did almost everything as a unit. Summertime in New Orleans was my favorite: school was out, and I could spend all of my time with my siblings and cousins. The adults would drop us off in the 7th Ward at my cousin Tina’s house because she had four children, so that was a natural hangout spot for us. We would make up neighborhood street games, go on quests and play outside until darkness fell and the street lights came on. Summer was like one big celebration for us. We would throw block parties, house parties and at the end of the summer we would have one big bash to celebrate the last weekend before the new school year. But in 2005, everything changed. We never thought that the last weekend of summer vacation would be our last one together. I was 12 years old.

But, while it’s difficult to think back to that time, we all must do so—for the sake of children in Louisiana today. Because Hurricane Katrina didn’t just destroy our homes. The storm uprooted and changed our lives forever. While my Mom and Dad decided to evacuate my sisters and I at the eleventh hour, my cousins decided to not leave. They wanted to “ride the storm out,” which wasn’t uncommon. In fact, it was very much normal for New Orleanians to not flinch at warnings of hurricanes because they were often false alarms and in most cases, many natives didn’t have the means to just get up and go. So I was surprised when my mom woke my sister and I up early on that Sunday morning in a panic. I remember her saying that there was “something in my spirit telling me we should leave.” So we followed my mama’s intuition, and packed a weekend’s worth of clothes, some cold cut sandwiches and snacks for the road and headed west of Louisiana.

As kids, evacuations felt more like vacations and we were excited about missing school and getting to travel to a new place. This feeling changed quickly after a journey that would normally take two hours took 14 hours because of traffic. This was not like past evacuations. Exhausted, tempers began to flare so we stopped at a flea market-turned-shelter that was taking in evacuees. I remember falling asleep on a hard concrete floor in the shelter and waking up to see the adults glued to a television. I walked over to the television to get a glimpse of what had them paralyzed. I immediately saw New Orleans—my New Orleans—underwater. I vividly recall seeing a shot of the Circle Food Store in the 7th Ward—this was the neighborhood that was in close proximity to where all of my cousins lived. In a panic, I asked the adults surrounding me: “If the Circle Food Store is underwater, where are my cousins?” One adult looked at me and said, “Everyone in New Orleans is dead.” I started crying. I believed that my family was dead for quite awhile until we finally got a call from them and learned that they had been rescued by boat from the flood waters. Learning that my family survived the storm was a huge relief, but the special bond and closeness that we all once shared was washed away forever after they were displaced. They never returned home, even after New Orleans was reopened.

In 2021, the children who experienced Hurricane Katrina are now adults. We are artists, entrepreneurs, parents, homeowners and so much more. When it came to healing the open wounds and trauma that Katrina caused, we didn’t receive much support from the federal government, or anyone for that matter. Instead, we are working to heal ourselves while also trying to bring back the place that we love so much. This process was interrupted on the 16th anniversary of Hurricane Katrina, when another category 4 hurricane made its presence known in the Gulf. This storm tore through Louisiana once again, leaving some areas submerged in water and most of the state without power for possibly weeks. From the physical damage to the neglect and slow response of the federal government, this is all too familiar to what we experienced in 2005. As I write this, there are people who are suffering from severe heat temperatures with no electricity, lack of food and water and barely any support or help.

How to Help People Impacted by Hurricane Ida

Everyone loves Louisiana—especially New Orleans—for our culture, food and spirit. People speak highly of our resilience and strength, but as a native let me just say that we are tired of being resilient and strong. At this moment we are asking the world to give their resources, time and attention to the thousands of Black and brown people who are on the verge of being neglected during their lowest point again.

I started filming my documentary, Katrina Babies (TIME Studios is co-producing Buckles’ upcoming documentary), about seven years years ago after I began to recognize my own trauma as well as the trauma of my peers. I was fed up with our feelings being ignored so I worked on telling our stories in this documentary with the hope of inspiring the rest of the world to learn about the lack of response in 2005 and prevent it from happening again. As I watch the slow response to Hurricane Ida, I am feeling PTSD from my childhood. I will ache if another generation of children has to experience the trauma and neglect that my peers and I experienced in our childhood. I am encouraging the rest of the world to not look away from what is happening in Louisiana, just because the news cameras are gone. Help the place that gives you so much joy and culture during their moment of need. 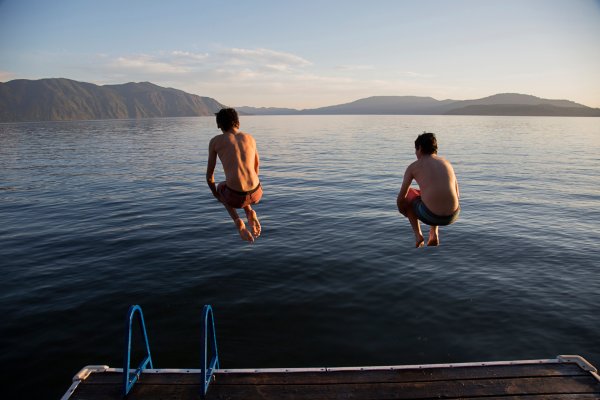 It’s Time For Boys To Talk About Emotional Health
Next Up: Editor's Pick