Mark Barden holds up a picture of his son, Daniel, on Oct 4, 2017, in Newtown, Conn. Daniel was one of 20 children killed in the Sandy Hook Elementary School massacre in December 2012.
Spencer Platt—Getty Images
By Melissa Chan

The gun maker being sued by families who lost loved ones in the Sandy Hook shooting is seeking school records for some of the first-graders killed in the massacre, court filings show.

It’s the latest affront to the families as the landmark wrongful death lawsuit heads to a jury trial slated for later this year or early 2022, their attorney says.

Remington has filed subpoenas to obtain report cards, attendance lists and other academic records for five of the students who were murdered at Sandy Hook Elementary School in Newtown, Conn. on Dec. 14, 2012. A total of 20 children and six faculty members were killed.

The nation’s oldest gun manufacturer also asked the Newtown Public School District to provide employment files of four educators who died in the shooting. The five students and four educators are part of a long-running wrongful death suit against Remington over its marketing practices.

Calling the subpoenas an invasion of privacy, Josh Koskoff, the attorney representing nine families of victims, filed a motion on Thursday to seal the documents, which include application and admission paperwork, transcripts and disciplinary records.

A legal source familiar with the case, who was not authorized to speak about the pending litigation, told TIME that it is routine in wrongful death lawsuits for the defense team to subpoena education and medical records to determine damages.

7,000 pairs of shoes are displayed on the grass outside the U.S. Capitol on March 13, 2018, to memorialize the children killed in gun violence since the Sandy Hook school shooting.
Saul Loeb—AFP/Getty Images

“It may sound crass,” the source says, “but at the end of the day, the jury is asked to put a dollar number on the decedent’s life.” Employment files that show salaries, for example, help determine that figure. And while a report card from kindergarten might not, the source says those files, while lower-level, are part of the overall procedure to gather every piece of information.

Koskoff disagrees, arguing those records would not help in estimating the “catastrophic” damages in this case.

“The records cannot possibly excuse Remington’s egregious marketing conduct,” he says. “The only relevant part of their attendance records is that they were at their desks on December 14, 2012.”

Thursday’s filing is the latest twist in the case. In an attempt to prove that Remington’s marketing strategies influenced the gunman to use a Bushmaster rifle for his shooting spree, the families have requested that Remington provide a slew of internal emails, social media analytics, advertising plans and more.

Instead, in July, Remington turned over tens of thousands of “random pictures” and cartoons—including images of Santa Claus and a bowl of ice cream. The legal source at the time said the seemingly random images were among tens of thousands of images and videos posted by third parties on Remington’s social media pages, and that all the material was turned over to plaintiffs as part of the discovery process.

Meanwhile, critics of the gun industry and scholars who have been closely eyeing the case say Remington’s internal documents could yield incriminating information—similar to the way a major civil settlement in 1998 forced the tobacco industry to disclose millions of pages of internal communications that revealed deceptive marketing practices.

Regardless of the jury decision, experts say the discovery process alone would give the public a rare glimpse into how a major gunmaker, which is usually shielded from lawsuits by federal law, markets its products. 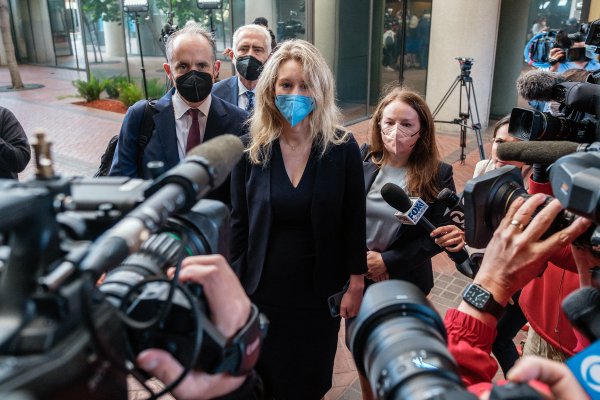 How Abuse Claims Could Affect Elizabeth Holmes' Trial
Next Up: Editor's Pick