The Bushmaster AR-15 was used during a massacre at an elementary school in Newtown, Connecticut.
Photo Illustration by TIME/Getty Images/Connecticut Superior Court
By Melissa Chan

For years, families who lost loved ones in the Sandy Hook Elementary School shooting have been counting on their landmark lawsuit against the gunmaker Remington to make some sense of their grief.

In Remington’s internal emails, social media analytics, advertising plans and more, they hoped to find answers to whether marketing strategies by the nation’s oldest gun manufacturer influenced Adam Lanza to use a Bushmaster rifle to kill 20 children and six faculty members at the school in Newtown, Conn. on Dec. 14, 2012.

Instead, as the historic jury trial’s slated September start date approaches, Remington has turned over tens of thousands of “random pictures” and cartoons—including images of Santa Claus and a bowl of ice cream—in what lawyers for the families say is an affront to the discovery process and legal system.

“It’s so depressing that this is what it’s come to,” says Josh Koskoff, the attorney representing nine families of victims in a long-running wrongful death suit against Remington over its marketing practices.

Some of the more than 18,000 images included in material provided by gunmaker Remington to plaintiffs' lawyers in a wrongful death suit arising from the 2012 Sandy Hook Elementary School shooting.
Connecticut Superior Court

In addition to more than 18,000 cartoons, Remington also included more than 15,000 other pictures and videos, including advertisements for its branded coffee mugs, hundreds of photos of animals being killed, and footage of people go-karting and reveling at gender-reveal parties. The files lacked proper context or additional information, the lawyers say, so it was impossible to decipher whether the images and videos were relevant to the case.

Koskoff says the document dump is Remington’s most recent delay tactic—the company filed for bankruptcy protection last year, stalling the case—and a sign that it is not taking the discovery process seriously.

“If everybody in every case just sends a bunch of Santa Clauses to serious requests for information,” he says, “the whole system would collapse.”

A legal source familiar with the case, who was not authorized to speak about the pending litigation, tells TIME the cartoons and images were not an attempt to insult the plaintiffs or obstruct the discovery process. The plaintiffs asked Remington to produce all content on the company’s social media pages, including embedded images and videos they could not initially view, according to the source. Those tens of thousands of images and videos were downloaded by Remington’s defense team and provided upon that request, the source says, adding that they were posted by third-parties on the social media pages.

Even so, critics of the gun industry and scholars who have been closely eyeing the case say Remington would have a good reason to want to stall. The trove of requested documents could give the public a rare glimpse into how a major gunmaker, which is usually shielded from lawsuits by federal law, markets its products.

“There’s certainly a fair likelihood that it could indeed be damaging politically and perhaps even to the legal case they’re trying to make,” says Robert Spitzer, a gun policy expert and chairman of the political science department at the State University of New York at Cortland.

Regardless of whether the families prevail in court, Spitzer says the process could force Remington to provide documents that could yield incriminating internal memos—similar to the way a major civil settlement in 1998 forced the tobacco industry to disclose millions of pages of internal communications that revealed deceptive marketing practices.

Spitzer says it’s entirely possible that a defendant could “throw in everything, plus the kitchen sink,” during the discovery process, just to burden those tasked with scouring through the tens of thousands of documents. “They want to make life as miserable as they can,” Spitzer says.

Firearms Training Unit Detective Barbara J. Mattson of the Connecticut State Police holds up a Bushmaster AR-15 rifle, the make and model of gun used in the 2012 Sandy Hook shooting, for a demonstration during a hearing of a legislative subcommittee reviewing gun laws, in Hartford, Conn., on Jan. 28, 2013.
Jessica Hill/AP

On July 2, Koskoff filed a motion urging the Connecticut Supreme Court to intervene. Cartoons aside, he says the documents more importantly show what Remington still has not handed over. In the last seven years of litigation, the attorney says Remington has produced some 46,000 documents—of which there are only 2,350 email communications.

“I know that Remington’s goal here is to delay things as long as possible,” Koskoff says. “Our goal is to make sure that doesn’t happen.” 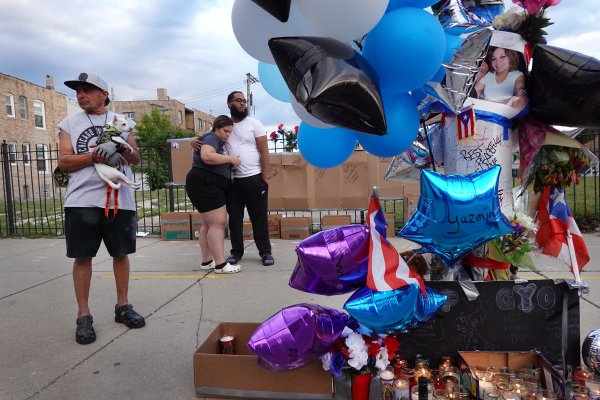 There's a Proven Way to Reduce Gun Violence in America
Next Up: Editor's Pick