China Sees Opportunity After America's Withdrawal from Afghanistan. But Can Beijing Do Any Better?

The speed of the Taliban’s takeover of Afghanistan has been a surprise; China’s reaction to the “U.S. humiliation” anything but.

As the Aug. 31 deadline for U.S. troops to leave the nation approaches, with thousands of Afghans and foreign nationals still desperately trying to board evacuation planes amid bloody terrorist attacks, Beijing’s official media has been pointing fingers.

“The disaster in Afghanistan was caused by the U.S. and its allies,” said the state-run Global Times, whose editor tweeted a photo of calm scenes around the Chinese embassy in Kabul while the U.S. legation was overrun. “Death, bloodshed and a tremendous humanitarian tragedy are what the United States has truly left behind in Afghanistan,” said state news wire Xinhua.

China did not oppose the U.S.-led invasion in 2001. In fact, Beijing backed U.N. Security Council resolutions that endorsed international efforts to oust the Afghan Taliban, with then President Jiang Zemin concerned about Al Qaeda militants spilling over its shared border into restive Xinjiang province. Just days after the Taliban fell, in December 2001, China sent a Foreign Ministry delegation to Kabul with a message of congratulations for new President Hamid Karzai, whom Jiang hosted in Beijing a month later.

But this is now being overlooked as state media portrays the present Taliban as a more moderate group than the one ousted in 2001—even attempting to characterize it as primarily an anti-American one. The Communist Party People’s Daily flatteringly credited the Taliban’s victory to its supposed adoption of Mao Zedong’s “people’s war” tactic: rallying the support of the rural population, while drawing the enemy deep into the countryside.

Read more: An Afghan Teacher on How the World Can Protect Girls From the Taliban

“Among the Chinese population, there is actually pretty strong admiration of the Taliban this time around,” Sun Yun, director of the China Program at the Stimson Center, told a recent meeting of the Shanghai Foreign Correspondents Club.

Ever the pragmatist, Beijing has always maintained links with the Taliban regardless of who was in power in Kabul. In 2000, before 9/11 stunned the world, China’s ambassador to Pakistan met with then Taliban chief, Mullah Omar, in one of the hardliner’s only meetings with foreign diplomats. In 2015, China hosted negotiations between the Taliban and Afghan officials in Xinjiang’s capital Urumqi, with a Taliban delegation visiting Beijing four years later.

Samina Yasmeen, director of the Centre for Muslim States and Societies at the University of Western Australia, says China is trying to create a zone of influence, which extends beyond Pakistan to include Afghanistan, Iran and Iraq. The underlining supposition is that if China can rebuild Afghanistan, it’s model must be superior to the Western one.

“The Chinese are looking at the region, saying, ‘Where are the areas where there’s dissatisfaction with the United States, either at the government level or among the people?’” says Yasmeen. “And that’s where they are signing comprehensive strategic partnerships, especially if it helps them with energy resources.”

Will Afghanistan become part of China’s Belt and Road?

Previously, China’s overriding interest in Afghanistan was security. Rahimullah Yousafzai, a Pakistani journalist and security expert, who once interviewed Osama Bin Laden, says that under pressure from Beijing the Afghan Taliban have been telling Uighur militants that China is off-limits. “The Taliban don’t want to create a problem for China,” says Yousafzai.

Today, in the wake of the U.S. withdrawal, Chinese strategists are thinking bigger, and eyeing deals to exploit Afghanistan’s mineral deposits. An Afghan parallel to the China Pakistan Economic Corridor—the $50 billion development of factories, power plants and pipelines from Kashgar in Xinjiang province to the Pakistani port of Gwadar in the Persian Gulf—might even be on the cards.

In 2016, India signed a $500 million deal to invest in Iran’s Chabahar port, which was seen as a strategic rival to Gwadar. In the years since, however, India’s relations with Iran have strained under pressure from the U.S., while Beijing in March inked a deal with Tehran to invest $400 billion over 25 years. Some strategists believe that China is well-placed to take over Chabahar and link it to China with a corridor though Afghanistan.

“If China were able to extend the Belt-and-Road from Pakistan through to Afghanistan—for example, with a Peshawar-to-Kabul motorway—it would open up a shorter land route to gain access to markets in the Middle East,” wrote Former People’s Liberation Army Colonel Zhou Bo in a New York Times op-ed.

A Chinese worker stands near trucks carrying goods during the opening of a trade project in Gwadar port, some 700 kms west of the Pakistani city of Karachi on November 13, 2016.
AAMIR QURESHI/AFP via Getty Images

China, adds Zhou, “is ready to step into the void left by the hasty U.S. retreat to seize a golden opportunity.”

But Afghanistan isn’t called the “graveyard of empires” for nothing, and China’s “Peace through development” model has failed to completely quell Tibet and Xinjiang. Beijing also has a patchy record overseas, with states where it has gained tremendous influence—Myanmar, Venezuela, Sudan, among others—perpetually consumed by strife.

Last Thursday’s suicide bombing at Kabul Airport demonstrates that Taliban control is by no means absolute. The attack, which killed at least 170 Afghans as well as 13 U.S. military personnel, was claimed by ISIS in Khorasan, otherwise known as ISIS-K, an Islamist group opposed to both the U.S. and the Taliban. They were believed to be behind a particularly horrifying attack on a maternity hospital in Kabul in 2020.

In Tianjin, Wang urged the Taliban “to draw a line” between itself and terrorist groups, particularly the East Turkestan Islamic Movement, which has launched attacks in Xinjiang. But whether the Taliban’s leadership can maintain political discipline among the group’s 70,000 fighters is another matter. The same goes for the group’s ability to police its vast, porous territory. That last week’s assailants managed to slip past Taliban checkpoints points to failings at best, and collusion at worst, on the part of Afghanistan’s new rulers.

That investment and strong government ties do not necessarily spell security is already evident across Afghanistan’s eastern border in Pakistan. China’s all-weather ally has long been bankrolled by Beijing yet militants have attacked Chinese interests in Pakistan at least four times in recent months, making an apparent assassination attempt on China’s ambassador in April, and launching an attack on Chinese workers last month that killed 13 and injured 41.

Attacks against Chinese infrastructure used to be primarily perpetrated by separatist groups—typically from Balochistan, where Gwadar port in based— because China was the Pakistani state’s chief local sponsor. Increasingly, however, militant Islamists like the Pakistani Taliban are taking aim at China, indicating Beijing’s appearance in the crosshairs of a broader Jihadist campaign. Riled by the persecution of Uighur Muslims, Al Qaeda ideologues have begun talking about China as the “new imperialists.”

It must not be forgotten that China indirectly contributed to the formation of the Pakistani Taliban in the first place. In March 2007, students at two seminaries affiliated with Islamabad’s Red Mosque launched vigilante raids against “un-Islamic” targets such as DVD vendors, beauty parlors and a Chinese-run massage parlor that they accused of being a brothel. Ten Chinese nationals were kidnapped, with the female masseurs paraded on TV in burqas before being released. Outraged, the Chinese government put huge pressure on the Pakistani military to rein in the extremists, culminating in a week-long siege of the Red Mosque that July and 154 deaths.

Read more: All Is Not Lost in Afghanistan. Yet

Such bloodshed at a holy site coalesced support for hardliners in Pakistan, providing a rallying point for myriad Islamist groups that, over the next five months, committed 56 suicide attacks claiming almost 3,000 Pakistani lives. In December, about 13 of these Islamist groups united to form the Pakistani Taliban. Their savagery was demonstrated by the 2014 Peshawar school massacre that saw 141 people killed, 132 of them children, in an atrocity that the Afghan Taliban condemned.

Of course, Beijing could not have foreseen the chain of events when it put pressure on Pakistan to protect Chinese citizens in 2007. But in this fractured crucible of conflicting religious, tribal and political interests, even the most straightforward diplomatic move can create effects that are impossible to predict. China cannot expect to pursue sustained engagement in Afghanistan without risking significant blowback.

“While there may be a lot of gloating in China that they have a better possibility of influencing this region, I think they’re going to find it very hard,” says Yasmeen. “Afghanistan is not there for the taking.” 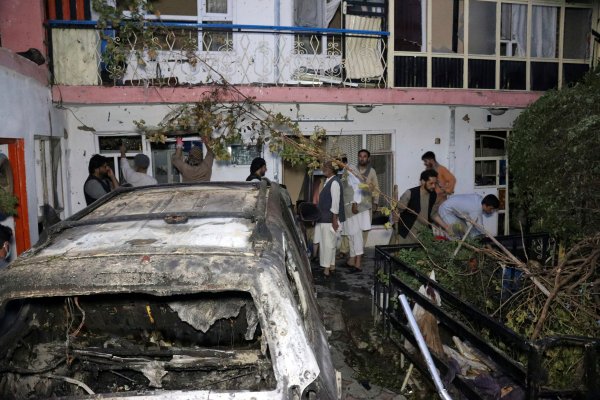