I Returned to Afghanistan 20 Years Ago to Help My Country. I’m Not Leaving Now

In the wake of the Taliban’s takeover of Afghanistan, a veteran Afghan political activist tells TIME why despair over the country’s future is misplaced — at least for the moment. TIME agreed to grant him anonymity over concerns for his security.

I came back to Afghanistan when the Taliban fell in 2001 because I wanted to make a difference for my country. I was always thinking that Afghanistan had the potential to be a prosperous place. I thought if we could replicate some of the values of the West—the opportunities and investment and entrepreneurship and social openness—that if we could bring in technology, and connect it with the country’s natural resources, that we would be able to create an opportunity for this country to progress. Just because the Taliban has returned does not mean all is lost. If we do things right, there is reason for optimism.

U.S. President Joe Biden says that the Taliban won because Afghans weren’t willing to fight. He doesn’t know what he is talking about. The Taliban succeeded because Afghans were fed up with their government and didn’t see why they should fight for it. Should they die so President Ashfraf Ghani could keep running the country into the ground? Should they fight so all the corrupt politicians and old warlords could laugh all the way to the banks?

You fight for something that you don’t want to lose. What has the government created that would be worth fighting for? The Afghan flag? A flag has to be wrapped around certain values. When an American flag is raised, it’s not just the Stars and Stripes. It is wrapped around freedom, democracy, a sense of ownership and the promises that the institutions, companies, corporations and government make to the people. It’s education, health care, law enforcement, a legal system. What are we offering wrapped in our flag? Only corruption and incompetence.

I do not blame this nation for opening up to the Taliban after what they have been subjected to throughout Karzai and Ghani’s reign. Taliban or no Taliban, people wanted to get rid of the status quo. The fact that a guy like Ghani has gone, in some ways it’s a relief for many of us. He was a drag on everybody, and he should not be let off the hook.

We have to keep up the pressure to bring change

The fear of the Taliban is justified, for what they did in the past. All fears have a historic background. But it’s also not a proven fact that what happened in the past will happen again. Some people have good reasons to leave, but Afghanistan needs its people more than ever. When I left Afghanistan during the Soviet invasion I had no choice. But the situation is more complicated now, and not so urgent. I’m not going to escape.

I’m not scared, much, but I have to be very careful. I don’t have a beard yet, but I may have to grow one. Maybe a small goatee. I really don’t like it but if it’s necessary to make it easier on everybody then I will take the burden. So far, the Taliban have been very cordial with me. It looks like they have realized that they need help. It’s a very optimistic sign in my view. The Taliban remember what happened 20 years ago. Now that they’ve achieved their goal, now that they walked into Kabul victoriously, they probably want to make sure that they do not squander this opportunity. I hope that’s the case.

The Taliban alone cannot form a government that will take Afghanistan forward. A government that is more inclusive might. The Taliban can play a positive role if their role is defined by international norms and by international standards. But if Afghanistan is declared a rogue state, then we won’t be able to get anything good from the Taliban. Just because the Taliban are victorious today doesn’t mean that everything achieved over the past 20 years will be lost. If Afghanistan is declared a pariah, that’s when everything will have been lost.

In the short term, the rights of women and minorities is a worry. Still, the country has evolved to the extent where some of the things we gained cannot be shelved. Women’s rights are not yet lost, but they could be. Women should not be fleeing; women should be in society so they can reclaim their space in our lives. In their absence they cannot claim anything. We have to keep up the pressure to bring change. Change doesn’t happen without pressure.

Students at the all-girls Marshal Dostum School in Sheberghan, Afghanistan, May 5, 2021. Sheberghan, in Jowzjan Province, collapsed less than 24 hours after a provincial capital in southwestern Afghanistan had fallen to the Taliban.
Kiana Hayeri—The New York Times/Redux

The path to stability in Afghanistan

The best-case scenario would be that the Taliban form a semi technocratic government or agreed to a transitional government for a year to allow everything to fall in place. If the U.S. and the international community can convince the Taliban to bring in some technocrats and share power, then I think we are on the right path to stability. If we have the right technocrats working with the Taliban, the Taliban will probably come to a more moderate center.

With some international pressure attached to development aid money we can guarantee those things, but we should make it a more universal issue of human rights. We should not talk to the Taliban with the NGO language and with the international community’s language of human rights, we should cloak it in the language of Islam, with the right people, interpreting the right Islam. We need to communicate these things with them at the right time. We don’t want to overwhelm them. We do not want to turn the switch completely off.

Read more: How You Can Help People in Afghanistan

The international community brought this into being. They cannot just wash their hands and say okay, the Taliban succeeded. The Taliban have to be held accountable before they can get help. We need to create some sort of check and balance by international norms. The first thing the international community should do is make sure that the Taliban abide by the peace agreement settled upon in Doha, where they said they wanted an inclusive government. That does mean women should be included. There should be provisions for guarantees of their representation, as part of a focus on human rights as a whole. We also cannot allow the old warlords, looters and strongmen that people are fed up with to come back in the name of inclusiveness and a representative government.

This time, the Taliban are different. Afghan society is different. The international community is different. And of course, the neighborhood is different. We have China, Iran, Russia, Pakistan and India all playing a role. They will be deciding factors as well. It’s a complicated situation, but all is not lost. Afghanistan still has a future, provided everyone stays engaged. 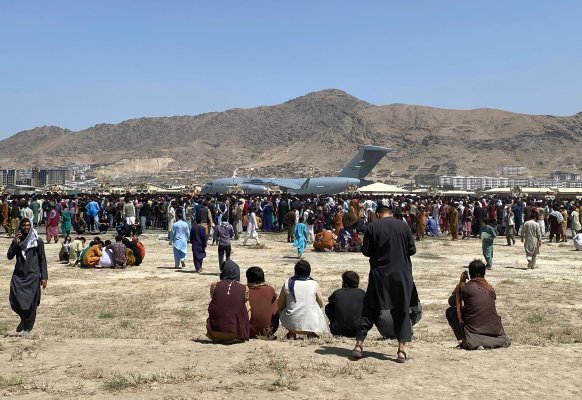 How One Nonprofit Is Attempting to Help LGBTQ Refugees Fleeing Afghanistan
Next Up: Editor's Pick