If there’s one reason to view Oscar tastemakers with skepticism, it’s the career of Rebecca Hall. She’s one of our finest, most daring actors. But year after year, she fails to make a blip on the Academy’s radar (although she has won a BAFTA, and plenty of critics’ groups love her). Part of the problem—if you view this sort of thing as a problem—is that she tends to choose challenging roles laced with subterranean complexities. In Professor Marston & the Wonder Women (2017), she played a brainy, assured, freethinking academic who helps bring a comic-book heroine to life. And her dazzling, harrowing portrayal of troubled Florida TV-newswoman Christine Chubbuck, in the 2016 Christine, was one of the finest performances of that year. Though Hall has been working in movies for more than 15 years—and has directed a terrific, soon-to-be released first feature, Passing, adapted from the Nella Larsen novella—she still has the aura of an under-the-radar favorite, a performer who keeps us guessing as to what her next move might be.

Beth always thought they’d been happy enough, and now she’s left to wonder why he’d take his own life. That would be a big enough heap of stress for any woman’s plate. But Owen apparently hasn’t fully passed into the beyond. The stereo turns on by itself in the middle of Beth’s mostly sleepless nights. She sometimes feels her husband’s presence so strongly she’s compelled to wrap her arms around its invisible form. These signs and signals aren’t all comfortingly benign. Beth keeps seeing bloody footprints on the dock outside the couple’s lakeside house. And when pressed, Beth’s kindly neighbor Mel (played by Vondie Curtis-Hall, always a welcome presence), informs her that Owen had exhibited some alarming behavior when he was alive. Mel had withheld these details from Beth in order to protect her, but now he sees they have more meaning in the wake of Owen’s death.

Hall is terrific at playing characters dancing on the knife’s edge, and that’s what she brings to The Night House. Beth is a woman dressed in calm, muted tones of linen even as she’s bristling with confusion; sometimes you’d swear you can see her nerve endings through her skin. In one of the movie’s best scenes—something of a throwaway, but one that perfectly conveys Beth’s state, poised precisely between jittery fragility and DGAF recklessness—she unleashes her diplomatic vitriol on the mother of a student who has come to negotiate a better grade for her offspring. It’s a terrific and slightly odd moment, one that briefly jolts this mostly turbid film to life.

But Brucker (The Signal, The Ritual), working from a script by Ben Collins and Luke Piotrowski, leans in so hard on loud, scary noises and overly elaborate plot twists that some of his more subtle and effective touches get lost—for instance, the way a light shining out into the misty night just barely reveals the outline of a man, so minimally you’re not sure you really saw it. Hall strives to carry The Night House on her more-than-capable shoulders, but she can’t quite compensate for the moments when the movie is outright silly or, worse, boring. As Beth, she’s a woman capable of seeing things we can’t, stranded in a story that doesn’t trust her enigmatic power. 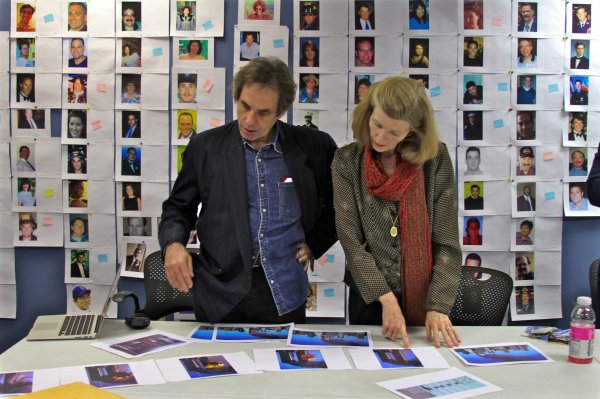 The Outsider Explores the Controversy Behind the 9/11 Museum
Next Up: Editor's Pick