A PricewaterhouseCoopers representative (with a briefcase) attends the Oscars held on March 2, 2014 in Hollywood, Calif.
Kevork Djansezian—Getty Images
By Olivia B. Waxman

In 2017, the accounting firm PricewaterhouseCoopers (PwC), which oversees vote counting and results distribution at the Academy Awards, caused a scandal for mixing up the envelopes that contained the names of the Best Picture winners.

It was another Oscars controversy that got PwC working with the Academy Awards in the first place.

The story took place in the very early years of the Academy Awards, in the 1930s, when there were rumors that Warner Brothers head honchos told the Academy members from their studio not to vote to nominate Bette Davis for Best Actress for her critically acclaimed role in Of Human Bondage, the film adaptation of the W. Somerset Maugham novel made by rival studio RKO.

At the time, Hollywood actors were usually tied to a studio, and Davis belonged to Warner Brothers. But in her memoir A Lonely Life, she described the early roles the studio gave her as “horrors.” She didn’t have her breakout role until 1934’s Of Human Bondage, and everyone was very aware that the movie wasn’t made by her home studio.

“It is an interesting fact that most people believe that Of Human Bondage was my first picture, although I had made twenty-one films before it,” she writes in her memoir A Lonely Life. “Two years of posing as Miss Fourth of July and Little Miss Clothes Horse for the fan magazines—two years of hard work and indignities and a rival studio, not Warners, gave me my true beginning.”

Before that role, she had demanded repeatedly that studio exec Jack Warner loan her out, and he eventually gave in “because she was driving him crazy,” Monica Roxanne Sandler, author of an article on politics at the early Oscars, which was published in the journal Media Industries in 2015, tells TIME. Sandler explains that it’s thought that Warner relented as if to say, “you’re not a big star, so go do this stupid film.”

To Warner’s surprise, however, the movie did well. Really well.

The 26-year-old starred as the waitress-turned-prostitute Mildred Rogers, a role that TIME described as notable for being “in the first part she has ever had which has required more than handsome clothes and an enigmatic expression,” in its 1934 review. LIFE magazine called it “probably the best performance ever recorded on the screen by a U.S. actress.”

Bette Davis in a scene from the film Of Human Bondage, 1934.
RKO Radio Pictures—Getty Images

According to Ed Sikov, author of Dark Victory: The Life of Bette Davis, these rave reviews about Davis’ success with another studio humiliated Jack Warner, and he felt pressured to give her better roles, even though he really wanted to punish her by giving her mediocre roles.

Based on the reviews, she seemed like a shoe-in for an Academy Award nomination for Best Actress. She did her own PR to promote her role in the movie, including for the Best Actress nomination, “in a way most actors hadn’t done before,” Sandler tells TIME.

But she didn’t get an Oscar nomination, leading to backlash over the perceived snub.

One article in Photoplay, one of the first U.S. fan magazines, quoted a postman as saying “My son and I have been talking about this Academy passing up Bette Davis. It’s a darn outrage . . . and I think Photoplay ought to give ’em the devil!’” Looking back at that time, the American actor Joan Blondell once reflected, “when they left Bette out, we all began taking a closer look and decided, ‘Hey, something’s rotten in Beverly Hills.’” The Academy believes that uproar marked “the first time there had been such a negative reaction to the selections.”

Rumors started spreading that producers had interfered, which got actors even more fired up because the 1930s was a period where creative labor was just getting unionized. Davis joined the cries of conspiracy, some of which Sandler says were rumored to have been spread by her publicist.

“My bosses helped them by sending instructions to all their personnel to vote for somebody else,” Davis claimed in her memoir A Lonely Life. “My failure to receive the award created such a scandal that gave me more publicity that if I had won it. Syndicated columnists spread the word ‘foul’ and the public stood behind me like an army. Not since that decision in 1934 was so cavalier a verdict allowed to take place. Price Waterhouse was asked to step in the next year to count the votes, which they have done ever since.”

Before the firm was hired, votes had been counted internally by people who were involved with the Academy and thus might have a vested interest in the result. The secret envelopes were added in 1941, after a reporter broke an embargo on the results. (Price Waterhouse later became PricewaterhouseCoopers through a merger.)

In an interview with Playboy published in July 1982, Davis added that, “All of the studios used to divide the prizes up, really. They’re much fairer today than they were.”

Davis did get a nomination the following year, for the Warner Brothers picture Dangerous, but she took to the streets — well, the red carpet — to express her dissatisfaction, intentionally sporting an unflattering dress that resembled a domestic’s uniform as a form of protest. Male winners like John Ford and Dudley Nichols also protested that year, as part of their unions’ push for fairer contracts.

When Davis won the prize, she saw it as only a “consolation prize” and was unhappy. (She had reason to think so: TIME called the movie “a second-rate picture with first-rate trimmings.”) “The following day, she walked out of Warner Brothers,” says Sandler. “she was trying to break her contract, it wasn’t successful.”

Actor Bette Davis and producer Jack Warner, one of the founders of Warner Bros. Pictures, hold Davis's Oscar for Best Actress for <i>Dangerous</i> at the Biltmore Hotel in Los Angeles, California, on March 5, 1936.
Hulton Archive—Getty Images

She felt demoralized. As she wrote in her memoir, “There was no change in the Warner attitude after all this acclaim. I was made to trudge through the professional swamp at Warners brimming over with frustration and rage…I might just as well have been any of the stock girls under contract…they still didn’t know that I had no desire to be just a glamour girl.”

But Davis would get revenge over those who snubbed her. In 1941, she became the Academy’s first female president at just 33 years old, though her brief tenure was controversial. (“As the only woman so honored, I was frankly proud. But it was just this pride that shortened the tenure of my office,” she wrote in her memoir.)

And her protests didn’t affect the studio’s ability to sell tickets. LIFE put her on the cover of its Jan. 23, 1939, issue because she was “Warner Bros.’ top box-office star.” And a decade after Of Human Bondage came out, Davis and fellow actresses would be further vindicated. After Olivia de Havilland sued Warner Brothers over similar contract issues, a court ruled that contracts limiting an actor to one studio were illegal. 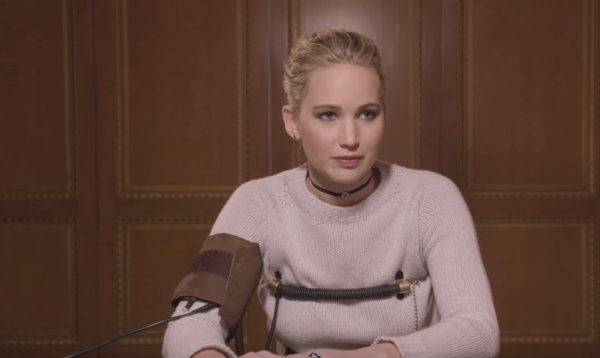