A good director can make you feel the vibrating summer heat, the hushed tranquility of a winter night, and the deepest feelings of a person who is seemingly nothing like you. Rebecca Hall does all of those things in Passing, her directorial debut and one of the highlights of this year’s Sundance Film Festival.

The story is adapted from Nella Larsen’s compact but potent 1929 novel about two girlhood friends from Chicago who reconnect later in life: Irene (played here by Tessa Thompson), has moved to New York and slipped with complete efficiency into the role of mother and doctor’s wife. Clare (Ruth Negga) has also left home behind, but in a more painful and permanent way. Both women are Black, but Clare—who, it’s suggested, has survived an unstable and unhappy upbringing—has chosen to live as white, a gamble she’s pulled off with dazzling success.

Passing is a beautifully rendered story that may be first and foremost about racial identity, though it enfolds so many ancillary reflections within its petals—on the power of longing and jealousy, and on the truth that we all make choices that define us as individuals—that anyone can respond to it. It’s also a deeply thoughtful spin on what we commonly call the American Dream: the ability to make something of ourselves, or to remake ourselves as we wish. We see this freedom isn’t free at all—it comes, sometimes, at perilous cost.

The story of Clare and Irene is pieced together as if it were shards of a dream, presented to us in black-and-white that’s often smudged around the edges, more glowing than polished. Some scenes are connected by a rippling piano riff that suggests the passage of time, though we’re never quite sure if days, weeks or months have gone by. The strict time frame isn’t important; what matters is the way the characters move around one another when they’re sharing physical space, and in the imagination when they’re not.

Irene is at first distrustful of Clare, almost repelled by the choice she’s made. But she’s also drawn to this long-lost friend, at once sympathetic to her and envious of her, in awe of her breezy, butterfly beauty. Irene’s life is comfortable but bustling. She’s upstanding and regal in her tasteful wardrobe of doctor’s wife clothes, an assortment of neatly pressed cotton blouses and trim, undistinguished little hats. Irene pours a great deal of energy into volunteer work and worrying about her two boys. Her husband, Brian (André Holland), clearly adores her, though he’s a little bruised that she seems to have so little time for him. Irene’s days are filled to overflowing with crossing T’s and dotting I’s; she’s fortunate enough to have household help, a Black cook and servant, Zulena (Ashley Ware Jenkins), whose presence reinforces her status in life.

Clare doesn’t just step into Irene’s world and that of her family and friends; in her floaty dresses, her hair like molten gold, she wafts in like a perfumed spell. In denying her race and her past, Clare has given up more than she intended. She longs for the world Irene has; in a particularly piercing moment, she tells her old friend how much she yearns to just be around Black people, to listen to them talk. In an early, deeply unsettling scene, her clueless husband—played by an unnervingly cool Alexander Skarsgård—is revealed to be a racist creep. Her loneliness, not just in the marriage but in the world at large, threatens to crush her.

Yet she desperately stays afloat, perhaps thanks to the unbearable lightness of her being. Clare makes Irene uncomfortable in lots of ways: might this lovely sprite prove too alluring to her husband? Might she be attracted to Clare herself? And even if Clare has bent her identity in a way Irene would never dream of, she radiates the illusion of freedom, while Irene’s devotion to propriety has sealed her in a claustrophobic bubble. The dance these two perform with one another is entrancing and heady and a little mysterious—its steps not easily parsed but always captivating.

Hall seems to know she’s got the gold standard of lead actors here: Thompson plays Irene as a woman whose self-assuredness has become a kind of prison; her eyes are animated by disquiet and desire—there’s a silent war going on in her head, and Thompson, almost conspiratorial in her subtlety, clues us into it. And Negga is marvelous as Clare, hypnotic and flirty and almost not of this Earth. With her grand, luminous eyes, she looks a little like the ‘30s actress Joan Blondell. She’s so easy to fall in love with, yet not easy to love. The price she’s paid for getting everything she ever wanted is written into her coquette’s smile, and it’s the saddest sight in the world. 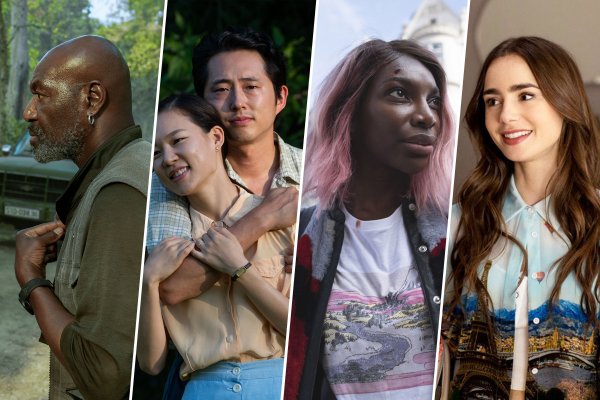 The 11 Weirdest Golden Globe Nominations—And What Should Have Been Nominated Instead
Next Up: Editor's Pick