With Thousands Awaiting Evacuation From Afghanistan, Biden is Willing to Keep Troops Past Deadline

President Joe Biden indicated for the first time Wednesday that he’s willing to keep forces in Afghanistan beyond his self-imposed Aug. 31 deadline for withdrawal, following widespread chaos that has complicated the evacuation mission.

“If there’s American citizens left, we’re going to stay until we get them all out,” Biden told ABC News. He noted, however, that “Americans should understand that we’re going to try and get it done before Aug. 31.”

The challenge is getting them all out in Taliban-held Kabul. The U.S. controls the capital’s airport, but the militants control the streets. And Defense Secretary Lloyd Austin said Wednesday the U.S. military is not able to guarantee safe passage to the airport to evacuate the roughly 15,000 Americans remaining in the country, as well as the estimated 50,000 to 65,000 Afghan allies and their families who could qualify for Special Immigrant Visas given to translators, contractors and other aides.

The airport has emerged as the sole means of escape since the Taliban encircled the capital and cut off routes in and out of the city. Inside the airport gates, the first of roughly 6,000 U.S. troops have arrived to help establish an airfield perimeter, defend it from attack and evacuate all U.S. citizens who desire to leave the country. Outside those gates, however, the Taliban have erected a gauntlet of checkpoints that has made it difficult to pass.

“We’re going to get everyone that we can possibly evacuate, evacuated,” Austin told reporters at the Pentagon. “And I’ll do that as long as we possibly can until the clock runs out or we run out of capability.” But he stressed: “We don’t have the capability to go and collect up large numbers of people.”

The situation marks the first real diplomatic test between the U.S. and the incoming Taliban government in Afghanistan. Americans and Afghans stuck in Kabul will have to trust the Taliban to uphold a “safe passage agreement,” which was negotiated between General Kenneth McKenzie, commander of U.S. military operations in the Middle East, and Taliban leadership in Doha, Qatar.

According to the U.S. State Department, there are already indications that the Taliban isn’t holding up its end of the deal. Deputy Secretary of State Wendy Sherman said Wednesday the U.S. has collected accounts that the militants are impeding Afghans from reaching the airport gates.

“We have seen reports that the Taliban, contrary to their public statements and their commitments to our government, are blocking Afghans who wish to leave the country from reaching the airport,” Sherman told reporters. “Our team in Doha, and our military partners on the ground in Kabul, are engaging directly with the Taliban to make clear that we expect them to allow all American citizens, all third-country nationals and all Afghans who wish to leave, to do so safely and without harassment.”

After the Taliban seized the city in a bloodless coup on Sunday, thousands of Afghans headed for the airport where the U.S. military was staging evacuation operations. Armed Taliban insurgents, meanwhile, established checkpoints inside the dense, sprawling city along with an 8 p.m. curfew. The State Department, which had urged Americans to leave Afghanistan as the Taliban toppled a series of provincial capitals across the country, issued a security alert for all Americans in Kabul to shelter in place while the volatile situation played out.

On Wednesday, the U.S. embassy in Kabul reversed course, issuing a new security alert telling Americans to go to the airport. But the message had an all-caps caveat: “THE UNITED STATES GOVERNMENT CANNOT ENSURE SAFE PASSAGE TO THE HAMID KARZAI INTERNATIONAL AIRPORT.”

The Pentagon said it has evacuated 5,000 civilians since Sunday, but that number falls well short of the goal of pulling out 5,000 to 9,000 people per day. “It’s obvious we’re not close to where we want to be in terms of getting the numbers through,” Austin said.

The largest hurdle, Administration officials say, is expediting the necessary paperwork to clear Afghans for departure. The Pentagon has dispatched teams to assist consular officials as they process those who make it to the airport.

The scene has been chaotic from the first moments of Taliban rule. On Monday, images emerged on social media of desperate crowds packed on the airport’s tarmac. Dozens of Afghans could be seen clinging to the undercarriage of a hulking U.S. military C-17 cargo jet as it lumbered down the runway. Another video showed gruesome footage of what appeared to be an individual falling from a plane as it took off. The Air Force acknowledged Tuesday it found “human remains” in the wheel well of one cargo jet, presumably a stowaway.

U.S. forces have fired warning shots as crowd control measures, but General Mark Milley, chairman of the Joint Chiefs of Staff, appearing alongside Austin at the Pentagon, said security at the airport is now “under control.” 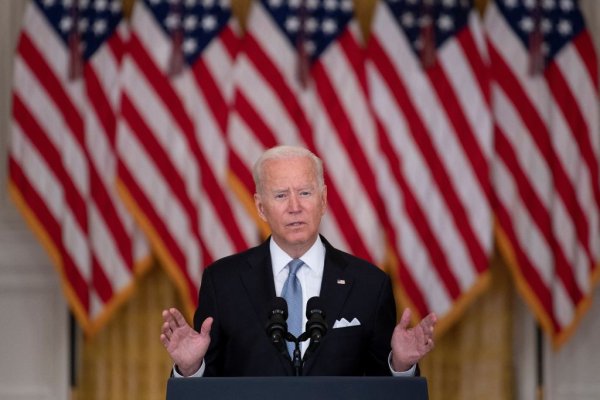 Joe Biden Mishandled the Afghanistan Withdrawal. Do Voters Care?
Next Up: Editor's Pick