Less than 24 hours after the Taliban marched into Afghanistan’s capital city of Kabul, the Biden Administration announced the largest permanent expansion of food stamp benefits in nearly half a century.

The news received scant attention, overshadowed by searing images of Afghans clinging to U.S. planes in a desperate attempt to leave the country. Instead of focusing his plan to alleviate food insecurity, Biden had to hurry back from Camp David to the White House on August 16 to defend the way he withdrew from the nation’s longest war.

As the U.S. looks ahead to the 2022 midterm elections, and even the 2024 presidential election, these two simultaneous events illustrate the dueling narratives voters will be fed. Biden’s allies will point to his achievements in helping the nation recover from a once in a century pandemic that spawned an economic crisis, hoping that voters will care more about that than a controversial move abroad. Republicans will seize on the Taliban’s takeover after Biden’s messy retreat from Afghanistan to cast doubt on Biden’s portrayal of himself as an experienced statesman with deep foreign policy credentials who would bring competence back to the White House.

Data so far shows the latter narrative is prevailing, with Biden’s approval rating hitting the lowest point in his presidency this week at less than 50 percent. Still, there are two ways this could go. The withdrawal could become an indelible stain on Biden’s legacy, and remain the most pressing issue for voters in the midterm elections next year. Or it could fade from voters’ minds in the coming months and years as they focus more on the COVID-19 pandemic and economic issues. Pollsters and experts say it is too early to tell. But what is clear, they say, is that after early months of success on vaccinations and legislation, Biden has reached the most difficult moment of his presidency so far.

“I don’t think they were counting on coronavirus getting worse, so that was already one kind of front in the battlefield that they were having to deal with,” says Lydia Saad, Director of U.S. Social Research at Gallup. “And now suddenly they’ve got [Afghanistan]… It’s a challenging environment.”

Since the Taliban regained control of Afghanistan, Biden’s approval rating has dropped by 7 points, to 46%, according to an August 16 Reuters/Ipsos poll—the lowest since he took office. His polling averages from two other trackers, 538 and Real Clear Politics, have also dropped below 50% for the first time in his term. There even seems to be waning support for withdrawal itself, which has long been supported by the majority of Americans. In April, a Morning Consult/Politico survey found that 69% of voters supported Biden’s self-imposed September 11 deadline to leave Afghanistan. A Morning Consult poll released August 16 found that number had dropped 20 points, to 49%.

Privately, some of Biden’s allies concede these numbers are grim, even as the President, his officials and supporters publicly continue to defend the execution of the withdrawal. And these numbers have delighted Republicans, who have already begun touting them as a harbinger of victory in congressional races in 2022. “Democrats’ House majority is doomed and the smart members will retire to save face,” a spokesman for the National Republican Congressional Committee boasted in an August 18 email to reporters after citing Biden’s drop in polling averages.

Republican pollster Frank Luntz argues that if Americans are left behind in Afghanistan, the situation could be as catastrophic for Biden as the Iranian hostage crisis was for Jimmy Carter in 1979, which many believe cost him reelection. “The American image and reputation abroad is taking a hit every single day,” Luntz says.

But Luntz also says that domestically, the political impact for Biden likely hinges on how the Taliban governs Afghanistan going forward. “If Americans don’t start dying again because of terrorism, [voters] may forget. If women aren’t aren’t thrown back to the Stone Age, [voters] may forget,” he says. “It’s really up to what the Taliban decides to do. But based on past history, I’m not optimistic about the future.”

“I’m not saying Biden will be boosted by it,” Sabato says, “but I am saying, if he is hurt by it, it will be temporary and this will be replaced by other issues that go to the heart of American life, like the pandemic [and] the economy.”

This is ultimately what Biden’s allies hope. “I think Kabul falling [to the Taliban] quickly just confirmed for the voters what they already thought, which is, ‘This is a forever war. We don’t want any more money and troops there. We can’t make any more difference that we’ve already tried, and we need to take care of home,’” says Celinda Lake, a Democratic pollster who advised Biden’s presidential campaign. “I think the focus for voters, and particularly blue collar voters and older voters, is more around surging COVID, shaky economy, getting kids safely back to school, rising crime rates. So things like that I think will push it out, no matter what the CNN or Fox coverage is.” 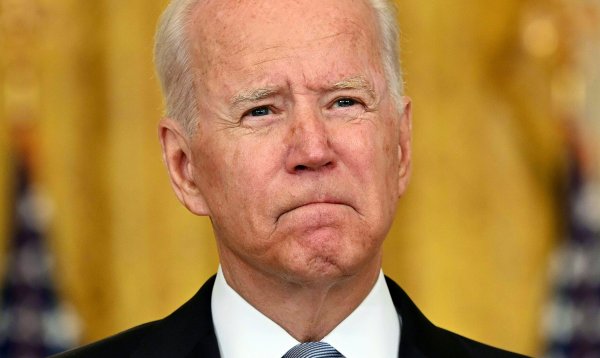 Biden Defiantly Shifts Blame on Afghanistan
Next Up: Editor's Pick