A woman sits at the scene of a police- involved shooting in Columbus, Ohio on June 22.
Stephen Zenner—Getty Images
By Josiah Bates

Having tracked millions of 911 across 9 U.S. cities over the span of a year, a new study from the Academy of Criminal Justice Sciences offers new insight into the ongoing discussions surrounding police reform and police officers’ duties.

The study analyzed nine different police agencies in cities both large (with a population over 1 million) and smaller (with under 80,000 residents) and tracked the different kinds of calls made to the police over the year of 2016/2017. In total, around 4.3 million calls were studied.

“The realities behind what motivates people to call the police and the amount of resources spent responding to these calls for service have not been carefully examined across multiple police agencies,” the survey explains. It aims to help correct that shortcoming, with its goal: “to better understand, across a wide range of agencies, the types of calls for service for which officers are dispatched to daily as well as how much time [and resources] they are using to respond to these calls,” Cynthia Lum, director of George Mason University’s Center for Evidence-Based Crime Policy and who conducted the study, tells TIME.

Since the murder of George Floyd in particular, there have been widespread calls for the “defunding” of police departments—though with a breadth of interpretations for what that process would actually entail. The study also serves to inform these calls to action, arguing that the defund debate “has generally proceeded without adequate research about either the scale or nature of issues that the police handle and the potential consequences of the proposed reform efforts.”

A crucial goal for the many in defund movement is the reallocation of a police department’s budget (or portions thereof) to fund social and community-led services, which they believe will do a better job addressing some of the issues police are called for. However, law enforcement spending has actually slightly risen this year in many of the largest cities across the country. (President Biden has also pledged to invest $300 million into federal policing grant programs.)

Advocates for defunding have also contended that police officers should no longer respond to certain misdemeanor crimes and mental health calls; in the latter case, their argument is that law enforcement officers are often not adequately trained to handle those situations.

But according to this study, mental health incidents only made up 1.3% of all the calls examined, and only 4% of those calls resulted in an officer being dispatched (though the survey did not track the actions of 911 dispatchers specifically). The largest percent of the calls were traffic-related at 16.8%. followed by “disorder” at 16.2% and “suspicion” calls—from individuals worried that a crime might happen or has happened—at 12.8%. Calls for violent incidents specifically were at 6.4%.

“What this means is that, even if mental distress calls are shifted to a co-responder model of response, it will only be a very small amount of resources shifted,” Lum says.

A caveat that remains, however, is that there is rarely good data on how police officers spend unassigned time when they’re patrolling but not actively responding to crimes. This makes it difficult to know exactly where police can cut back; even if officers aren’t responding directly to a call about mental health, they can still encounter individuals struggling with mental health on their patrols, explains Nancy La Vigne, executive director of the Task Force on Policing for the Council on Criminal Justice.

“The [documented] frequency of those encounters is low but the risk of harm is high,” La Vigne adds.

Read more: We Must Remove the Threat of Police Violence from Everyday Life

Some U.S. cities have already taken steps to try and minimize the chances of violent encounters between police and civilians—whether by banning officers from making minor arrests, decriminalizing the use of certain drugs or using trained health workers to respond to certain calls.

Police Scorecard, a policing research database that studies police data reported to the FBI annually by law enforcement, says that police are indeed making fewer arrests for low-level offenses. While the data for 2020 and 2021 is not out, between 2013 and 2019 such arrests have declined, particularly in big cities. Anecdotal reporting and evidence collected during the COVID-19 pandemic suggests similar trends, with many violent crimes declining. And a decline in minor arrests has helped reduce the number of police shootings, according to data from FiveThirtyEight.

If certain police responsibilities and resources are going to be shifted in line with such findings, La Vigne says that discussions—among police departments, activists, and lawmakers—must focus more on what officers are actually doing and where their duties can best be adjusted. 911 data can clearly serve as another potential piece of this puzzle, but also as a reminder that police reform remains a far more complex and nuanced issue than many realize. 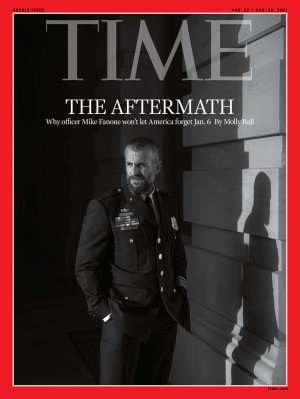 The Story Behind TIME's Cover of D.C. Officer Michael Fanone
Next Up: Editor's Pick