The secret to life is knowing what your strengths are and running with them, and Ryan Reynolds has figured it out. He has the shiny vinyl good looks of a Ken doll and, when he wants to turn it on, a slightly vapid demeanor that comes off as cockeyed confidence. He doesn’t seem to care if people think he’s intelligent or not, which somehow makes him seem more so. He has a tendency to smirk, but he also refuses to take himself too seriously. Some people like him a lot; others want to smack him. He appears oblivious to it all. With his little chipmunk teeth, he will prevail.

That’s especially true in Free Guy, a comedy that might have been a horror show without him, but which—almost against the odds—he vests with a loopy sweetness. Reynolds plays Guy, who is literally just a guy. Every morning he wakes up in his pristine bluish-white city bedroom, exalts in his pet goldfish, flicks his Venetian blinds once or twice, and then heads off to his bank job, dressed every day in the same short-sleeved blue shirt and khakis. He stops and gets a coffee—cream, two sugars—on the way. His best friend is a security guard named, aptly, Buddy (Lil Rel Howery).

Guy seems to like the routine of his life just fine, which is good, because there’s apparently no way he can change it. He’s a denizen of Free City, a hugely popular open-world video game in which the players can do whatever they want—generally, they just adopt customized tough-guy skins, drive fast in their cartoony cars and rob virtual banks. But Guy can’t even avail himself of those dumb, blunt freedoms. He’s an NPC, a nonplayer character—essentially just window-dressing for the players to shoot at if they feel like it, or ignore if they don’t.

Then he sees a woman on the streets of Free City, a tough gal with blue-black hair and a warrior’s stride (Jodie Comer) and falls in love at first sight. He must meet her, but he doesn’t know how. In desperation, he grabs a pair of the sunglasses that distinguish the players from the dweebs and discovers a world of options he’s never before known, little balloons of choice hovering in the air, his for the grabbing. After he’s roughed up by one of the city’s million-and-one bank robbers, a first-aid kit shimmers miraculously before him—just by touching it he’s instantly healed. When he goes to the ATM—it’s conveniently marked MONEY—he discovers he has enough dough to buy the sneakers he wants at the SHOE STORE. (They make him magically fast and nimble.) Before long he has amassed a helicopter, a hot-pink Humvee, a golf cart and a horse and buggy, among other random vehicles, because why not? “I feel brand-new!” he declares, and he is. Players around the world become obsessed with him. With his newfound autonomy, he becomes their hero, known as Blue Shirt Guy.

The shell of a plot wrapped around Guy is a lot more pretentiously meta, and less fun, than he is: in her not-gaming life, Comer’s character turns out to be Millie, one of the designers of Free City. Her erstwhile co-designer, Keys (Joe Keery), now works for the nasty software kingpin who stole their idea (Taika Waititi). The last third or so of Free Guy is cluttered and fussy, and the plot takes too long to wrap up. In one egregious sequence, the company behind the film, Disney, makes bragging visual references to its biggest properties (Marvel, Star Wars), flicking them at us like annoying ninja stars. And some of the writing is just stupid, like the heroine’s fondness, aggressively professed, for swings and bubblegum ice-cream. The suggestion is that if she seems too smart, too sophisticated, she might not be “relatable.” Barf.

But if there are problems with Free Guy, they bounce jauntily off Reynolds. (The director is Shawn Levy, of the Night at the Museum franchise, which helps explain why Free Guy is sometimes funny but often just perfunctory.) In his old, NPC life, Guy once tried to order a cappuccino at his local coffee shop, only to be met with a glazed stare by the NPC barista. Undaunted, he reflects on the word itself: “I enjoy saying that! It’s like a waterfall made the letters.” Free Guy is a little like Ready Player One jumbled with The Truman Show, with some Sleeping Beauty and The Velveteen Rabbit mixed in. It is, admittedly, a lot of movie, probably too much. But Reynolds makes the most of Guy’s elation at finally busting out. He’s an organic presence in an otherwise artificial world, a shout of joy in a dull landscape of grunting men and crashing cars. Everyone’s a gamer—but he’s the only one who knows how to play. 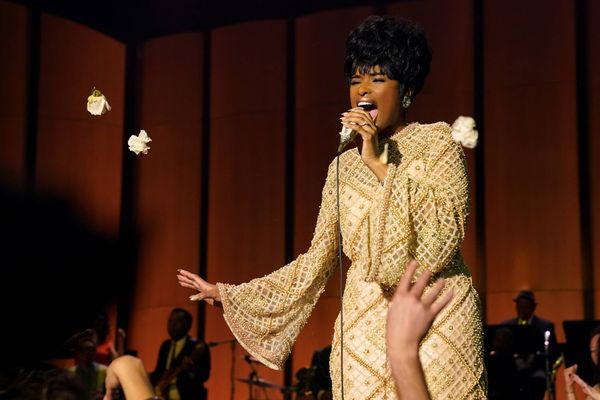 Jennifer Hudson Makes a Dazzling Aretha Franklin in 'Respect'
Next Up: Editor's Pick