Why Scarlett Johansson Is Suing Disney Over Black Widow

The Black Widow has one more fight left in her. This time, though, it’s not with the Red Room but with the House of Mouse.

Scarlett Johansson, who recently retired from her role as the superhero after her final Marvel movie Black Widow, filed a lawsuit against Disney on Thursday over breach of contract. The star alleges that the studio broke its agreement with her when they decided to release the Marvel Cinematic Universe film simultaneously in theaters and on their streaming service, Disney+. She says in court documents that the deal guaranteed an exclusive theatrical release and that her salary for the film was largely tied to box office performance. By debuting the movie on streaming at the same time, Johansson believes Disney cost her an estimated $50 million, according to the Wall Street Journal.

A Disney spokesman told the Journal that Johansson’s suit had no merit and that it was “especially sad and distressing in its callous disregard for the horrific and prolonged global effects of the Covid-19 pandemic.” The studio said that it “fully complied with Ms. Johansson’s contract and furthermore, the release of Black Widow on Disney+ with Premier Access has significantly enhanced her ability to earn additional compensation on top of the $20 million she has received to date.”

The final outcome of the suit will likely determine whether studios release major films already in the can to streaming services as the pandemic threatens to surge for a fourth wave in the U.S. and theater attendance remains low. Many stars’ contracts tie their income directly to box office performance, so releasing a film to video on-demand can cost A-listers millions. Johansson is not the first actor to express concern about how the changing landscape would impact her pay: When Warner Bros. decided to release Wonder Woman 1984 to HBO Max, they entered into a reportedly tense negotiation with star Gal Gadot and director Patty Jenkins. Ultimately, the studio paid them $10 million apiece.

While we may not shed a tear for the multi-millionaires losing out on a major payday, actors with less power and leverage, as well as professionals in other roles in the film industry, will be impacted by these deals too. Here’s everything you need to know about why Johansson is suing, how Disney’s treatment of Johansson throughout her tenure at Marvel Studios colors the conflict and how the suit could affect the future of Hollywood.

Read More: Black Widow Began as a Sexist Stereotype. More Than a Decade Later, Scarlett Johansson Is Reclaiming Her Story

Johansson is suing because stars’ contracts depend on box office

Most studios either have launched a streaming outlet in the last couple years—Disney has Disney+, Warner Bros., HBO Max—or cut a deal with an already-existing service to release some movies to streaming, as MGM recently did with Amazon. With theaters closed during the COVID-19 pandemic, many studios decided to release the big-budget films that would traditionally top the box office to these online formats.

Most notably, Warner Bros. announced it would drop 17 movies—its entire slate for 2021, which includes The Suicide Squad, Dune and The Matrix 4—onto HBO Max at the same time that they released the films in movie theaters. Disney did the same for Mulan, Cruella and, now, Black Widow, which Marvel fans could stream at home for $30 on Disney+ Premiere Access the same day it debuted in cinemas.

Read More: Warner Bros. Will Release Its Films on HBO Max and in Theaters Simultaneously. The Decision May Change Moviegoing Forever

The business interests of the studios can be murky. For instance, Warner Bros. decided to release all of its movies to HBO Max back when both WarnerMedia and HBO Max were operated by AT&T (who has since spun off the service). Even though the strategy would no doubt undercut those movies’ box office earnings, it’s possible that AT&T cared more about number of streams on HBO MAx. After all, they’re a phone and internet service provider.

Even in more straightforward cases, like Disney Studios owning Disney+, the C-Suite might believe that releasing Black Widow on streaming would entice so many subscribers to Disney+ that they were willing to sacrifice Black Widow’s theatrical earnings.

Many big stars still receive two checks per film: one guaranteed amount upfront, the other dependent on whether the film makes money in movie theaters. But the pandemic has shifted studios away from prioritizing box office profits and toward a greater focus on boosting streaming subscriptions. Now we’re seeing the ripple effect on actors’ contracts.

Johansson writes in her complaint that her team reached out to the studio in 2019 when they learned it was considering a dual-release model. In an email included in court filings, Marvel Chief Counsel Dave Galluzzi told Johansson’s team Disney would release the film in the traditional theatrical model and, if plans should change, “we would need to discuss this with you and come to an understanding as the deal is based on a series of (very large) box office bonuses.” Johansson claims her team did indeed seek to renegotiate her contract after they learned the studio planned a dual release for Black Widow and that Disney didn’t respond.

“This will surely not be the last case where Hollywood talent stands up to Disney and makes it clear that, whatever the company may pretend, it has a legal obligation to honor its contracts,” John Berlinski, an attorney who represents Johansson, told the Wall Street Journal.

The move to streaming can cost stars big money

Scarlett Johansson isn’t the first big star to push back against studios’ efforts to send the biggest-budget movies straight to streaming. The New York Times reported that while Gadot and Jenkins were able to negotiate $10 million payouts with Warner Bros. before the switch to streaming for Wonder Woman 1984 was even announced, other creatives weren’t as fortunate. Few in Hollywood were given a heads-up about the switch in Warner Bros. strategy and representatives for major stars like Margot Robbie, Will Smith, Keanu Reeves and Angelina Jolie were reportedly left scrambling to strike new deals with the studio.

Tenet director Christopher Nolan publicly railed against Warner Bros. for its decision. “There’s such controversy around it, because they didn’t tell anyone. In 2021, they’ve got some of the top filmmakers in the world, they’ve got some of the biggest stars in the world who worked for years…on these projects very close to their hearts that are meant to be big-screen experiences…And now they’re being used as a loss-leader for the streaming service—for the fledgling streaming service—without any consultation,” he told Entertainment Tonight last year. “A real bait and switch.”

Warner Bros. renegotiated many of its talent contracts, which would have been similar to the one Johansson has with Disney. They ultimately paid more than $200 million to actors and creatives as part of their amended agreements.

Still, rumors are swirling in Hollywood A-listers remain unhappy that their big pictures are being released on the small screen.

As it stands, actors take a gamble by betting on a film’s success. If a movie flops, they can keep their upfront check but won’t get a box office bonus check. Johansson’s suit and the negotiations over streaming are complicated because it’s impossible to know how much money Black Widow would have made in an alternate universe.

The character suffered years of sexism, and this conflict ends her reign on a sour note

The Marvel Cinematic Universe is the most successful franchise in the history of cinema. Johansson was the first and, for a long time, the only main female character in the Marvel movies. She appeared in nine films in the franchise and was forced to wait 11 years to get her own solo flick. When Black Widow did arrive, it was a prequel set after the character died in 2019’s Avengers: Endgame. Now, she seemingly has no future in the MCU.

Black Widow was introduced to the MCU as “potentially a very expensive sexual harassment lawsuit” in Iron Man 2 and was relegated to sidekick, love interest and object to be ogled throughout the early Marvel films. The transgressions were so egregious that director Cate Shortland told TIME she felt a need to address the history of sexism directly at several points in the dialogue for the Black Widow movie.

Currently, Disney does not plan to release the three other Marvel Studios movies slated for this year—Shang-Chi and the Legend of the Ten Rings, The Eternals and Spider-Man: Far From Home—immediately on Disney+. Disney’s decision to release Black Widow simultaneously to Disney+ and theaters rather than holding off on streaming until later in the year could be read as a final indignity for a character who suffered through sexism throughout her decade-long run at the studio.

Given the context, coming into legal conflict with the sole female member of the original Avengers team does not look good, to put it mildly. Many observers have commented that the gender politics of this particular case are suspect.

Read More: Black Widow Is a Showcase for Florence Pugh and Scarlett Johansson First and a Marvel Superhero Movie Second

At the same time, Johansson is one of the studio’s biggest stars. As some journalists have pointed out on Twitter, if Disney is able to potentially (allegedly) breach the contract of an A-lister like Johansson, it’s likely they would do it without much fuss for less famous actors and creators.

Whether Johansson, already a superstar, is motivated by altruism or the simple belief that she was deprived of the earnings she deserved is not for us to say. But there’s no doubt that the fate of the suit will set a precedent for other actors with less power going forward. 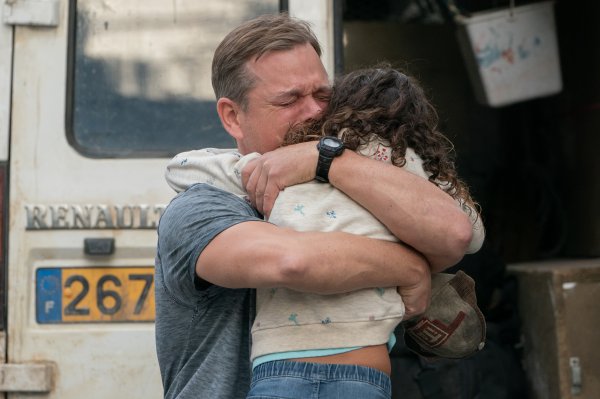 Matt Damon Shines in Stillwater, an Uneven Thriller Inspired by a Real-Life Murder Case
Next Up: Editor's Pick