Before they left town this week, Senate Democrats passed a budget blueprint that would dramatically increase federal spending on programs aimed at childcare, health care and climate change. Even with an eye-popping $3.5 trillion pricetag—on top of the $550 billion in new spending that a bipartisan group of Senators cleared days earlier—the magnitude of the package is tough to comprehend.

So let’s put the 13-digit-deep figure in historical context. The last time the United States went this big on a project for a sustained period of time, Adolf Hitler was slowly annexing Europe for Germany. That’s right; if Democrats get their way on these twin spending packages, Washington’s spending—and deficits—hit levels not seen since the United States marshalled its military and political powers to defeat Germany, Italy and Japan and set in motion what the founder of this magazine would call “the American Century.”

A report from the Federal Reserve Bank in St. Louis notes that total military spending in 1944 was $91 billion. In today’s dollars, that’s roughly $1.4 trillion in cash. To cover that, the top federal tax rate hit 94% on incomes that today would be equivalent to $2.5 million, and even the working poor were expected to pay their fair share. As much as there is an instinct to critique the Greatest Generation for a grandiose reset of America’s position in the world, at least it paid its way.

No one is proposing that astronomical, wartime level of taxation, but it is remarkable that the present Lucian vision of an “American Century” is leaning heavily on a bigger line of credit, and even that’s iffy at the moment. The twin programs are being sold as completely paid for by tax endorsement, new vigilance on cryptocurrency and an assessment for the ultra-rich corporations. But the nonpartisan watchdog Committee for a Responsible Federal Budget estimates that the dual packages could cost $2.4 trillion in red ink over the next decade and demand $4.3 trillion in borrowing to set the stage.

The new package is as ambitious as it is audacious. Democrats are moving forward with a purely partisan plan to spend $3.5 trillion on one of the biggest investments in American systems in history. Embedded in the text is a Peace Corps to fight climate change, billions to retrofit older homes with new green tech and help for new home buyers. The money would provide for free pre-K and some college, a pathway to citizenship for some in the country illegally and big upgrades to the postal service’s fleet of vehicles.

As much as it’s novel, it isn’t neat. Using a very clever loophole in the Senate’s arcane rules, Democrats can advance the spending plan with just 50 votes using a process Washington calls budget reconciliation. It side-steps the typical 60-vote requirement for most of the Senate’s work and in an evenly divided, 50-50 Senate, gives Vice President Kamala Harris the power to break the tie in Democrats’ favor.

At its origin, the trickery was used to resolve byzantine budget disputes; this column carried over on page 2,300 but not on page 2,304, for instance. But Democrats won a ruling from the Senate’s referee on rules and can advance this infrastructure plan using a budget resolution as their vehicle. Which means, in a limited scope, Democrats can rely on the barest of majorities to push this agenda.

But it’s far from certain. No sooner than a bipartisan coalition cleared a $550 billion package of new spending did Democratic Sen. Joe Manchin of West Virginia flag his concerns about the follow-up act. Others like Sen. Kyrsten Sinema and Mark Kelly—both of Arizona—may also need some coaxing. And as evidenced in March, at least eight Democrats aren’t entirely endorsing pieces of the broader liberal agenda of a $15 minimum wage. Party unity is the talking point but may not be the reality for Democrats.

Meanwhile, the $550 billion plan remains parked in a poorly lit garage. House Speaker Nancy Pelosi and progressives in her House aren’t planning to take up the bipartisan first bite of spending until they can also advance the $3.5 trillion plan. It’s all or nothing for the House, and it’s not entirely clear the Senate can get Phase Two to the south side of the Capitol, meaning the whole $4 trillion spending dream could be for naught.

Republicans are taking particular glee in the Democratic divisions about to come to the fore. “Disarray” is their preferred talking point, but they aren’t entirely off-base when it comes to the Democrats’ competing ideas ahead. This is a huge—and consequential—effort to take enormous amounts of federal cash and send it into the economy. It’s as if America were looking to combat an existential threat, but rather than facing it abroad on the battlefield, the spending is hitting pickup lines at proposed pre-K. Washington is considering spending levels unseen in decades on new programs carrying a scale that most lawmakers haven’t truly grasped. But, as was the case in the 1940s, America doesn’t always get to pick its big fights. 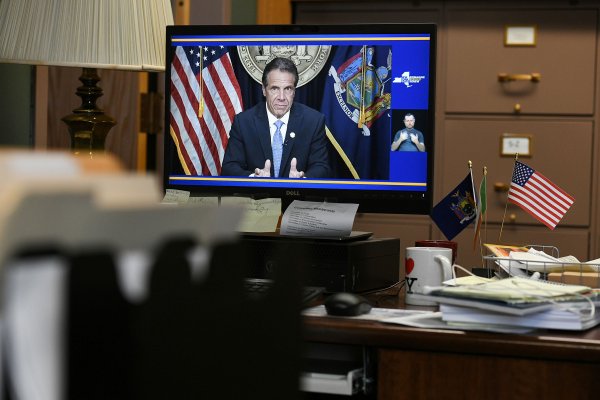 Why the Cuomo Political Dynasty May Endure
Next Up: Editor's Pick