Crypto Tax: How Congress Wants to Pay for Your New Roads

The Capitol in Washington, on July 30, 2021.
Stefani Reynolds—Bloomberg/Getty Images
By Philip Elliott

The whole sexiness of cryptocurrency has been its potential to disrupt the status quo, to revolutionize Wall Street and create a new democratic ethos in a global economic system has largely been dictated by the U.S. dollar since the end of World War II. Well, that allure is starting to fade as even crypto’s strongest evangelists realize they may still have to play by Washington’s rules if they want to keep literally printing money.

A bipartisan framework on infrastructure spending—and how to fund that spending—cleared its first procedural hurdle in the Senate on Wednesday. A 2,500-page draft of the deal is now racing through Washington, though lawmakers today are saying it’s premature to treat it as gospel. Special interests are still trying to sneak in their own efforts as patience among negotiators is at a nadir. Much of the accounting behind how the $550 billion in new spending in the bill will be paid for is shaky at best (more on this below) but one piece is pretty solid: $28 billion is slated to come from tightening up taxation on cryptocurrencies. In other words, making sure people mining mints from their computers are paying the IRS what they’re due.

Companies that operate in the crypto ecosystem have been snapping up K Street lobbyists, but the outlays are still relatively small. Coinbase, essentially the New York Stock Exchange of crypto, has upped its spending on lobbying to $160,000 so far this year, up from the $100,000 at this point in 2019, the last full year uninterrupted by a pandemic that benched most of K Street and suspended in-person lobbying. Ripple, a major player in the cryptocurrency space that is facing a potentially devastating SEC lawsuit, has spent $550,000 lobbying in the first half of this year, more than twice what it spent in all of 2019. And an entirely new lobbying group, The Crypto Council for Innovation, is bringing together crypto leaders with the likes of Fidelity and Square to help crypto companies ward off the threat of regulation or, perhaps worse for them, taxes.

“If we don’t start planning and taking action soon, we have everything to risk,” Perianne Boring, the head of the Chamber of Digital Commerce, a cryptocurrency lobbying group, warned earlier this year.

These aren’t Washington neophytes unsure how to navigate the government’s choppy waters; the Chamber of Digital Commerce’s board is basically a roster of former regulators and insiders, including former White House chief of staff Mick Mulvaney. Which is why D.C. is now seeing a who’s who of power players in both parties line up with rising crypto firms.

But the crypto industry’s recent interest in D.C.’s political infrastructure may be coming too late.

Crypto’s highly unregulated currency has long had its critics in Washington, perhaps none more vocal than Sen. Elizabeth Warren of Massachusetts. Because of its anonymity and portability, it has the potential to fund underground economies, like human trafficking and drugs. And it’s all taking place on the Internet, a place most denizens of Washington don’t understand in much detail. To be blunt: if you’ve ever watched a hearing on tech issues, it becomes very clear very quickly that most lawmakers haven’t really expanded their understanding of the Internet much beyond that gem of a moment when Sen. Ted Stevens called it “a series of tubes” back in 2006.

That doesn’t mean Congress doesn’t sniff an opportunity around the overlooked crypto market, particularly when lawmakers are looking for cash. Enter the bipartisan ambitious infrastructure plan, whose own finances don’t actually add up. The nonpartisan Committee for a Responsible Federal Budget released its own quick assessment of the bipartisan plan, which lawmakers declared was paid for without any new spending. The so-called “pay-fors” in the bill probably will cover only half of the $550 billion in new spending, the group found.

The rest was coming from the bet that states would give back cash already allocated to them, the whole plan having a 33% return on investment and holidays from requiring companies to fully fund pensions in real time. A $6 billion draw-down of the Strategic Petroleum Reserve that is one of the pay-fors is money already spent. Even the whole “waste, fraud and abuse” cannard is back, saying it was a still-TBD pay-for. The proposal left out that there actually isn’t that much fraud to be caught and it barely covers the cost of the search. (Spending $5 billion anti-fraud saves only $6 billion, or a payoff of a net $1 billion.) And the writers of the outline are including in the pay-fors unemployment insurance costing less than anticipated, 5G spectrum sales that have already taken place and COVID-19 money that’s already been spent.

That leaves us with cryptocurrency taxes. By going for crypto’s keys, lawmakers spotted a relatively unorganized sector that most Americans cannot define and still has relatively few powerful friends in D.C. It’s telling that Republicans derailed plans to beef up the IRS’ chase of tax scofflaws and opted instead to use some budget gimmicks and crypto crackdowns to pay for this investment in roads, bridges and, in a twist of irony, $65 billion for high-speed Internet.

Legacy tech companies have learned—painfully—that disinterest in Washington doesn’t mean Washington will ignore an industry it sees growing, thriving and threatening to long-standing systems. Failing to play the influence game comes with actual costs: in this case, $28 billion. It sure makes a couple million spent on K Street influence peddlers seem like a good ROI. 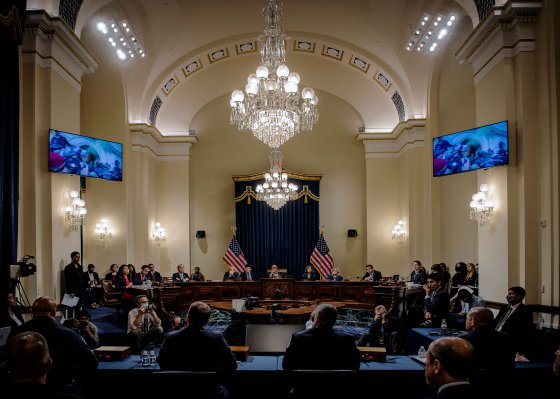 Two Decades Later, the Lessons of the 9/11 Commission Echo
Next Up: Editor's Pick