Though biopics about R&B and pop-music artists keep getting made—the past seven years or so have given us Get On Up, Love & Mercy, Bohemian Rhapsody and Rocket Man—they’re among the most easily picked-apart genres, and not just by persnickety critics. When it comes to, say, a pivotal songwriting scene, there’s always someone out there—some dude with two thousand LPs, maybe—to stand up and proclaim, “That’s not the way it happened!” As if anyone beyond those who were actually in the room—or in the studio, or there at the piano—could truly know how any of it happened. To put a life, or an act of creation, on-screen means speaking in movie language, always its own kind of poetic license to begin with; to put a life of music on the screen invites even more hyperbole and exaggeration.

But then, what are pop songs anyway, beyond small miracles built from dreams, sweat and harmonic principles? They are themselves impossible and wondrous, even if the people who deliver them to us are fallible and human and often fragile. Director Liesl Tommy’s feature debut Respect is a story about fragility and resilience wrapped in the larger story of Aretha Franklin. It may take liberties with certain facts, as almost every biopic must. Yet even if you already know much of Franklin’s life story, Respect is both entertaining and emotionally revelatory, telling us something about the birth of songs like “I Never Loved a Man (the Way I Love You)” and “Respect” (written by Otis Redding but made indelible by Aretha) without attaching them to anything so dull and rigid as an origin story. When Franklin—played, superbly, by Jennifer Hudson—arises in the middle of the night and drifts to the piano to hammer out her version of “Respect,” her sisters, who happen to be bunking with her in her New York apartment, join her on the bench. The “Re-re-re” riff they come up with—springing off their nickname for their sister as well as the first syllable of the song’s title—is the perfectly chosen accessory, the aural equivalent of the handbag that completes the look.

You might laugh at this moment, especially when you see it isolated in the movie’s trailer: it’s so corny, so moviefied. But then, inspiration often strikes in the midst of just messing around. Respect honors the utilitarian nature of songwriting, and of making art in general. But the movie honors subtler elements of Franklin’s nature, too—as much as we can know of it—most notably her guardedness, born of necessity. The movie’s early scenes are sketches from her Detroit childhood in the early 1950s, where she was encouraged to sing at the Saturday night parties held by her father, Baptist minister and civil rights activist C.L. Franklin (played by Forest Whitaker in a deft performance that balances paternal benevolence with manipulative trickery). It’s hard to say if the young Aretha (astutely played by Skye Dakota Turner), who’s being raised by her father while sorely missing her largely absentee mother (Audra McDonald), is coerced into belting out songs for the adults or if she’s eager to do so. The truth is probably somewhere in the middle, and these early moments of Respect show a young girl awed by the polished talent around her, its mere proximity an intoxicant. (Her father’s famous friends include Sam Cooke and Dinah Washington, the latter played with OTT bravado by Mary J. Blige.) Later, when Franklin asserts “I want hits”—first to John Hammond, her early champion at Columbia (Tate Donovan), and later to hipster Atlantic Records producer Jerry Wexler (Marc Maron)—we already know where her desire for fame, her yearning to be listened to, comes from.

Respect covers a lot of territory and rarely drags. We get a sense of C.L. Franklin’s possessiveness of his daughter and her talents, and of her first meeting with the magnetic, ultra-cool Ted White (Marlon Wayans), the man who would become her husband and manager and later her abuser. We see her confidence in her gifts practically take shape in the air, like defiant ghosts, during her first recording session at FAME Studios, in Muscle Shoals, Ala. Surrounded by an all-white band—one of the factors that led to White’s storming out of the session, taking Franklin with him—she shows them who’s boss, urging them to follow her lead as she frames “I Never Loved a Man” at the piano. They follow dutifully, their egos drifting to the floor like dust, which is exactly where they belonged in Franklin’s presence.

As with all show-biz bios, the rise to fame is the most compelling segment of Respect. Franklin’s increasingly dazzling wardrobe is part of that story: costume designer Clint Ramos traces that evolution with an array of ladylike tweed coats that eventually give way to dreamy sequined dresses. (Franklin’s beloved furs, symbols of hard-earned wealth and luxury but also a kind of armor, are so well represented they’re practically characters in themselves.) Tommy, working from a screenplay by Tracey Scott Wilson (which was drawn from a story by Thelma & Louise writer Callie Khourie), stresses Franklin’s civil rights activism, and her forthright desire to use her music as a means of change. But Respect is straightforward about her diva behavior, too, particularly her tendency toward overwork and drinking, which often caused her to throw tantrums or miss performances.

In Respect, when Franklin behaves badly, those around her ascribe her behavior to “demons,” a convenient shorthand for burdens they can’t possibly understand. By the time she was 16, Franklin had given birth to two children, largely raised by her grandmother (here played by Kimberly Scott) while she took to the road with her father on a grueling touring schedule. Her first child was conceived when she was just 12—the father was a family friend, if that’s a term that could ever be used for such a man—and was raised as the “family” baby. Tommy captures the eternally simmering trauma of the singer’s childhood with just one image: Aretha as a little girl, in a full-skirted dress that might normally be filled out by crinolines, backlit and standing at the kitchen sink. She’s drinking a glass of milk. She is hugely pregnant.

It’s Hudson’s job to play the adult version of that girl, and she shoulders it with something like tenderness. The easy thing, when you’re playing a strong, potent character, is to bite down; Hudson never does. This is a terrific performance, underplayed in all the right ways, an emotionally detailed portrait of a woman who knew what she wanted and knew she could deliver—but who also moved through life knowing that she’d been cruelly robbed of that thing we so sentimentally call childhood. That was the luxury young Aretha hadn’t been afforded.

But Hudson also shows us a woman who held tight to her own spark of light, no matter how much people around her tried to control her. Hudson’s voice, at once resonant and downy-light, is no match for Franklin’s—no one’s is. And so, instead of mimicking Aretha, Hudson glides along on a parallel track, re-creating these infinitely familiar songs as if to show them to us anew. How do songs get made, from writing to arranging to performing, and on to that eternity of just being? Respect shows us one path, forged by a queen. Anyone who ever abused, troubled or controlled her in life can bow down now. And stay down. 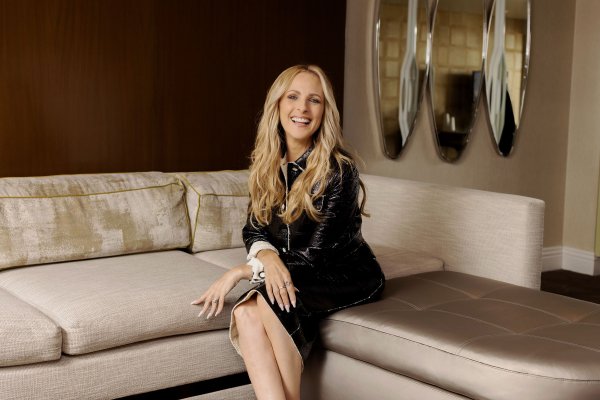 Marlee Matlin Will Never Stop Fighting
Next Up: Editor's Pick