Yes, Bohemian Rhapsody and Green Book Are Problematic. Can We Love Them Anyway?

If you pay any attention to Rotten Tomatoes or social media, critics and other types of voluble movie enthusiasts will tell you that Bohemian Rhapsody, a biopic—more or less—about Freddie Mercury, the late lead singer of Queen, is a bad movie. What an epic embarrassment, they’ll say, that a film this lousy has been nominated for five Oscars and has made some $200 million, and counting, in North America alone. They’ll tell you that you can enjoy it if you want, but it’s still terrible: The dialogue! Laughable. The editing! A joke. Rami Malek’s fake teeth! Can you even? They’ll also remind you that Bohemian Rhapsody was directed by Bryan Singer, a man who has been accused, with a high degree of believability, of sexual assault and possibly rape—but by all means, continue to exercise your bad taste in liking Bohemian Rhapsody, and don’t worry that your enjoyment of the film might be construed as a tacit benediction of the possible sins of Bryan Singer.

But what if, after all that, you still like Bohemian Rhapsody?

You might not care when critics trash your favorites, and that’s the healthiest possible attitude (though when they’re being their best selves, critics of any stripe—whether writing about movies or TV, books or music—can point you in the direction of things you might love). But the desire to shame people for what they like is a peculiar by-product of the rise of social media, a channel on which everyone feels compelled to advertise his or her own good taste and judgment. And as a person—and a critic—who happens to love Bohemian Rhapsody, even I am tired of the wan, pitying smiles I get from my colleagues when they remember my championing of the film.

You may have your own reasons for loving Bohemian Rhapsody—Malek’s brazen, exuberant re-creation of Mercury and Queen’s 1985 Live Aid performance is enough—but here are some of mine: Malek’s portrayal of Mercury rings with both tenderness and bravado, and if the king-sized loneliness of the rock superstar is a cliché, it’s no more so than the loneliness all humans feel at one time or another.

What’s the difference between a cliché and something that’s simply universal? Bohemian Rhapsody is about rock’n’roll and loneliness, as distinct entities and intertwined. In one sequence the newly successful Mercury shows off the big house he’s just bought, bragging that there’s one bedroom for each of his beloved cats. But he’s happiest about the fact that his former fiancée, Mary Austin (played by Lucy Boynton), has a flat just across the way. At night, he can ring her up and ask her to turn on her light—it makes him feel better just to know that she’s there. Mercury, by this point in the movie, has admitted to himself that he’s gay, though in real life he never came out publicly. Some have charged that the movie “straightwashes” Mercury, failing to do justice to his identity as a gay man. Bohemian Rhapsody doesn’t grant any group comfortable ownership of Mercury. But what tribunal is qualified to decide who should own him? If we need to be allowed to love whom we love, that also means our hearts and our libidos can sometimes steer us in directions we can’t explain. In Mercury’s case, as Bohemian Rhapsody tells the story, Mary Austin—the two remained close until the end of Mercury’s life—represents a dream of love that couldn’t fit his reality. Gazing toward her window, Mercury expresses the ultimate isolation; it’s a visual ballad of loneliness that goes beyond sexual desire. And where do you go to find solace from that?

Bohemian Rhapsody is pretty tame when it comes to its depictions of sex, but it’s not devoid of sensuality and glamour. Is the story 100 percent factually accurate? Even 85 percent? Probably not. But as a person who has loved rock’n’roll since the age of 3, what I’ve learned is that there’s always some rock dude around to guffaw indulgently and tell you, “Hey, I was around, and that’s not what it was like at all.” We don’t always want to know exactly “what it was like”; sometimes the spirit of the thing—and the way it takes shape in movie form—is what counts. Since when is purity automatically superior to sensation, especially in a movie about rock’n’roll? Inarguably, the dialogue in Bohemian Rhapsody is stilted and awkward. But movie dialogue isn’t always realistic—often it’s a kind of code, a portal into a world beyond strict logic. One person’s corny dialogue is another’s artistic stylization. Even the outsized fake choppers Malek wears in his portrayal of Mercury—a sticking point for many who hate the movie—have an oddball, alien grace: You can be larger than life and even so, your teeth may barely fit in your mouth. You’re special, but you’re also a misfit. Who isn’t?

You may not care about any of that and still love Bohemian Rhapsody for your own reasons. But even those who love the film may feel uncomfortable with the charges of sexual misconduct, and worse, that have been leveled at its director. Singer was fired from Bohemian Rhapsody with just a few week of filming to go, after failing, in several instances, to show up for work. There are also stories of discord on the set; reportedly, Singer at one point threw a piece of electrical equipment, at no one in particular. The success of Bohemian Rhapsody translates into a huge financial gain for Singer; if the sexual-misconduct and rape allegations against him are true (he denies them), that’s not how we want the world to work. But it’s possible to lament that a possible tyrant and/or criminal will get a huge payday and still respond to the film that person made. Movies, more than some other types of art, are shaped by so many people on the way to the screen, and our relationship with them has always been complex. Naturally, we all yearn for moral simplicity. But its elusiveness is yesterday’s news, not today’s.

The moral issues around another heavily Oscar-nominated picture based somewhat loosely on fact, Peter Farrelly’s Green Book, are complicated for other reasons. Mahershala Ali plays a fictionalized version of Don Shirley, an erudite, classically trained musician who, in the early 1960s, hired a white man to be his driver on a tour of the deep South. Viggo Mortensen plays the driver, an Italian-American thug named Tony “Lip” Vallelonga. The movie’s script was written by Vallelonga’s son, Nick. Critics of the film have argued, not unreasonably, that the story focuses unduly on the white guy’s experience, and members of Shirley’s family came forward after the release of the film to cite factual inaccuracies; they had never been contacted by either Farrelly or Nick Vallelonga as the film was being made. It hasn’t helped that Vallelonga has tweeted anti-Muslim sentiments in the past. He has apologized to Ali, who is a Muslim. But it’s not a stretch to think of Vallelonga as, at best, a jerk. (Even if, before that particular controversy, Octavia Spencer, one of the film’s producers, defended Vallelonga’s right to bring his father’s life to the screen: “When does one get to tell their story? This is actually Nick’s family’s story. It’s bound to someone else’s story, but if this white man can’t tell his own story, then I don’t know where we’re headed.”)

Yet lots of moviegoers, particularly those in the underserved over-50 bracket, have enjoyed Green Book, prompting some of its critics to carp, condescendingly, that it’s the kind of movie their moms like. (It just took top prize at the AARP’s “Movies for Grownups” Awards.) But no matter what you think about Green Book, it’s insulting to insinuate that people over 50 don’t know how movies work. Like most people approaching a movie drawn from real events, the Green Book audience is likely to know that the picture isn’t purely factual. Maybe they’ll want to learn more about the real-life story, and the film’s inaccuracies, after the fact. And maybe they’re just responding to the film’s basic premise, harmless enough on its surface: Two guys from different backgrounds in early-1960s segregated America, one of whom (the white guy) is provably racist, become friends. Reasoned essays arguing why the film is, at best, racially retrograde and, at worst, insulting to people of color, are out there—the film writer Mark Harris wrote one for Vulture—but those should be distinguished from Twitter lectures skewering an older white (and often liberal) audience for liking the picture. If you hate Green Book, blame the movie—not the audience.

The Green Book controversy, particularly among film critics and Oscar prognosticators on social media, has gone beyond merely questioning—again, with some validity—the movie’s representation of Don Shirley’s own experience. The cumulative online scolding amounts to a charge that anyone who enjoys the film is racist. That’s quite a leap, and I say that as someone who dislikes Green Book: Its feel-goodism is way too slick for my tastes. But Mahershala Ali’s performance, which has been nominated for a Best Supporting Actor award, is thoughtful and multi-textured in a way that the film overall is not. (In fact, this is one place where the Academy has reinforced racism: There’s no way Ali and Mortensen, who has been nominated for a Best Actor award, aren’t co-leads in the movie, and they should be recognized as such.)

Ali has apologized to Shirley’s family for not reaching out to them in preparation for the role. But he has also been put in the position of having to defend the film’s very existence. On Jan. 27, after winning a Screen Actors Guild award for his performance, he told the assembled press that the character of Don Shirley was the best acting opportunity he had ever been offered. He spoke of Dr. Shirley as “a multidimensional character who had agency.” And he explained—as if he should have to—his goal as an actor: “My job is to make sure that my work is as deep as possible—and that I’m as connected to my character as possible—and that I first and foremost believe myself so that I have a shot at an audience believing me.”

Ali is getting at something bigger there, a truth that applies not just to problematic movies like Green Book, but to the deeper ways in which movies—a commingling of the work of actors and directors, of writers and editors and designers—reach us. All movies, even those based on fact, are fictions, made by fallible human beings and subject to a prismatic range of interpretation and response. That’s part of what can make them terrible and untrustworthy. It’s also the alchemy that can make them wonderful. That doesn’t mean we should love movies without thinking about them, or refuse to re-examine them when new information emerges. But capitulating to shame or embarrassment over what we like shouldn’t be part of the equation. That just turns movies into weapons. And we already have enough of those. 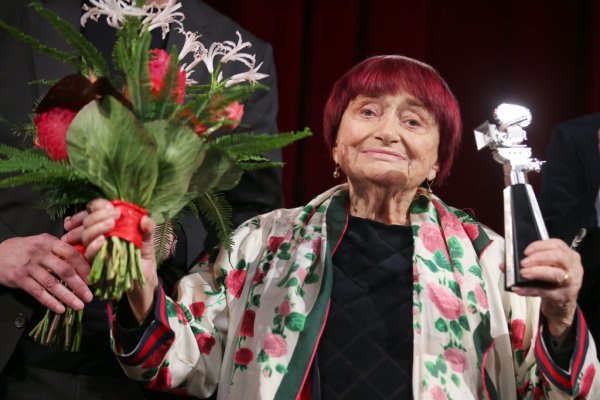 Review: A Great Filmmaker Says Goodbye, Joyfully, in Varda by Agnès
Next Up: Editor's Pick