Sydney McLaughlin Is the 400-m Hurdles World Record Holder. But Her Journey Is Just Beginning

Sydney McLaughlin of Team USA prepares to compete in round one of the Women's 400-m hurdles heats on day eight of the Tokyo 2020 Olympic Games at Olympic Stadium on July 31, 2021 in Tokyo, Japan.
Matthias Hangst—Getty Images
By Sean Gregory/Tokyo

It is now Sydney McLaughlin’s time at the Tokyo Olympics.

For Team USA, the women’s 400-m hurdles is rarely a marquee event at the Olympics. But it has been quite awhile since the U.S. has had a hurdling prodigy like McLaughlin. Her race for gold in the Tokyo Olympics event was one of the top events of the Games.

At the 2016 Rio Olympics, McLaughlin, then 16, became the youngest athlete to make the U.S. Track and Field team since 1972. The Dunellen, N.J., native did not make the Olympic final in 2016, but McLaughlin, who turns 22 on Aug. 7, was just getting started on her record-breaking journey.

In 2017, McLaughlin became the first person to be named Gatorade High School Athlete of the Year for two straight years. After one season in college at the University of Kentucky, she turned pro in 2018, signing a sponsorship deal with New Balance. She set the previous 400-m hurdles world record at the U.S. Track and Field trials in June, running the race in 51.90 seconds and becoming the first woman to break the 52-second barrier. McLaughlin, who also signed a deal with TAG Heuer in July, is poised to succeed Allyson Felix as the most recognized—and marketed—woman in track.

“Sydney McLaughlin possesses a quiet confidence,” Felix wrote about McLaughlin for this year’s issue of TIME 100 Next, “that demands your attention.”

Read more: Sydney McLaughlin Just Won the 400-m Hurdles. Remember Her Name. You’ll Be Hearing a Lot of It

McLaughlin won gold—and broke her own world record—in the 400-m hurdles Olympic final on Wednesday, Aug. 3, in what was one of the most thrilling track races so far in Tokyo. She set a new world record, finishing at 51.46 seconds, almost half a second faster than her previous world record from Trials. Muhammad finished second, also running under 52 seconds, with a time of 51.58.

Coming into the race, however, McLaughlin downplayed the competition with her teammate. “The biggest lesson the sport has ever taught me,” McLaughlin says, “at this moment in time, is really to just focus on your lane. Everybody’s journey in the sport looks different. Nothing is ever guaranteed from year to year. So, taking the opportunities that you have in front of you and not looking around at what everyone else is doing. It’s so much easier said than done. But truly for me, focusing on my lane and my 10 hurdles, whatever that looks like in whatever capacity, truly does make the difference instead of running somebody else’s race.”

From a family of runners, McLaughlin has her eye on the sport’s future

McLaughlin is the daughter of runners; her father, Willie, reached the 400-m semifinals at the 1984 Olympic trials, and her mother, Mary, ran in high school.

Only a few years removed from her own high school graduation, McLaughlin is at the fore of a new generation of track athletes hoping to raise the sport’s profile in America; though long one of the leading nations in the sport, track and field struggles for attention while competing against juggernauts like the NFL, NBA, and even top college sports. “It’s really important and it’s really cool to be a part of this new wave,” she says. “It’s kind of pushing the boundaries of what’s possible, and I think it’s really entertaining for people on the outside to watch but also to know that we are able to take things to a whole new level. And definitely, as someone who’s a part of it, it pushes you to be the best that you can be. I think it definitely pulls the best out of everyone’s competition, every time we step on the track.”

McLaughlin was poised to break her own world record in Tokyo. She had put in the work and hasn’t always had it easy. During the one-year pandemic delay of these Games, McLaughlin switched coaches and started working with Bobby Kersee, the husband and former coach of six-time Olympic medalist Jackie Joyner-Kersee as well as Felix’s longtime coach. She has been open about struggles with mental health, including experiencing post-Olympic depression after Rio, and the online harassment she faced while in high school.

What has changed the most for her over the past five years? “I think, as a person, kind of just understanding more of the woman that I want to become,” says McLaughlin. “Being on the team at 16, there was so much that I was just uncertain about, not just in the sports world but being a teenage girl. So the past five years have just been crucial to understanding who I want to be and what I want to represent.”

One item on her list: the future—and present—of American track and field. 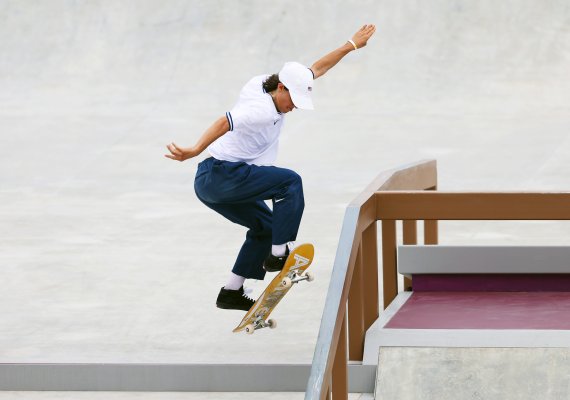 NBC’s Tokyo Olympics Coverage Was Always Going to Be a Disaster
Next Up: Editor's Pick