Those tuning into the Tokyo Olympics may have noticed that Russian athletes are competing under the flag of the ROC, or Russian Olympic Committee, rather than their native country. That’s because the 335 Russian athletes participating in this year’s Summer Games are considered “neutrals” due to the fact that Russia is currently banned from the Olympics.

In 2019, the World Anti-Doping Agency banned Russia from all international sporting competitions, including the Olympics, for four years over a doping scandal. The punishment was cut in half to two years by the Court of Arbitration for Sport following a 2020 appeal and now ends in December 2022. But at this year’s Olympics, Russia still can’t be represented as a country.

This led to the creation of the ROC, a workaround for Russian athletes who have proven they weren’t connected to the doping scandal to still be able to compete in Tokyo.

How does the ROC work?

While the Russian athletes in Tokyo are still wearing the Russian colors of white, blue and red, under the International Olympic Committee’s (IOC) rules, they’re prohibited from displays of national representation in any form.

“All public displays of the organization’s participant name should use the acronym ‘ROC,’ not the full name ‘Russian Olympic Committee,'” the IOC rules state.

This means that instead of the Russian flag, the ROC is represented by a flag featuring an Olympic flame in Russian colors above the five Olympic rings. If a ROC athlete or team wins gold, as the men’s artistic gymnastics team did on Monday, Pyotr Tchaikovsky’s “Piano Concerto No. 1” plays instead of the Russian national anthem. The ROC is currently in the top five on the medal board.

Why is Russia banned from the Olympics?

The World Anti-Doping Agency’s ban on Russia was put in place after investigators found that Russia had tampered with drug-testing data in order to cover up state-sponsored doping programs that involved over 1,000 athletes.

“The Panel has clearly upheld our findings that the Russian authorities brazenly and illegally manipulated the Moscow Laboratory data in an effort to cover up an institutionalized doping scheme,” World Anti-Doping Agency President Witold Bańka said in a statement following the Court of Arbitration for Sport’s 2020 ruling on the case. “In the face of continual resistance and denial from Russia, we clearly proved our case, in accordance with due process.”

Russia also can’t be represented as a country at the 2022 World Cup or the 2022 Winter Olympics, which are set to take place before the ban is lifted in December 2022. 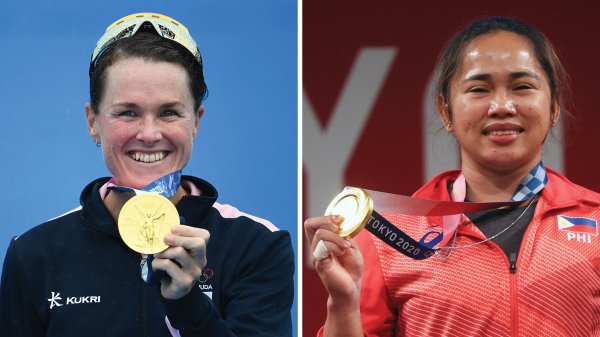