Naomi Osaka Knocked Out of Olympics in Straight Sets by No. 42-Ranked Player

Naomi Osaka was knocked out of the women’s singles tennis at the Tokyo Olympics on Tuesday when she suffered a surprise defeat in the third round of competition to Marketa Vondrousova of the Czech Republic.

Vondrousova, the 2019 French Open runner-up, is ranked no. 42 in the world. She beat Osaka, who is ranked no. 2, in just 1 hour and 8 minutes of play. That makes Vondrousova the first player to move through to the quarter-finals.

Vondrousova beat Osaka 6-1, 6-4 in the third round of competition at the Ariake Tennis Park. The roof was closed on Tuesday due to rain from the incoming Tropical Storm Nepartak.

Osaka, 23, easily won her first two rounds of competition after taking a two-month mental health break, missing both the French Open and Wimbledon. On Saturday, she defeated Zheng Saisai of China. She beat No. 49-ranked Viktorija Golubic of Switzerland in the second round on Monday.

Osaka went into the Olympics as a favorite to win gold, and acknowledged the pressure after her loss. “I mean, I’m disappointed in every loss, but I feel like this one sucks more than the others,” Osaka told reporters.

She added: “I definitely feel like there was a lot of pressure for this. I think it’s maybe because I haven’t played in the Olympics before and for the first year, [it] was a bit much.”

Osaka, who is the world’s highest-paid female athlete, was fined by French Open officials in May after she announced that she was going to skip post-match press conferences to protect her mental health. She later withdrew from the tournament altogether, citing anxiety and wanting to exercise self-care—a move that kicked off discussion about the importance of mental health, both in sports and more generally. “It’s O.K. to not be O.K.,” Osaka wrote in a recent cover essay for TIME.

The tennis star, who was born in Japan to a Japanese mother and Haitian father, was representing Japan in this year’s Olympics. She lit the Olympic cauldron at the Tokyo 2020 Opening Ceremony on Friday. 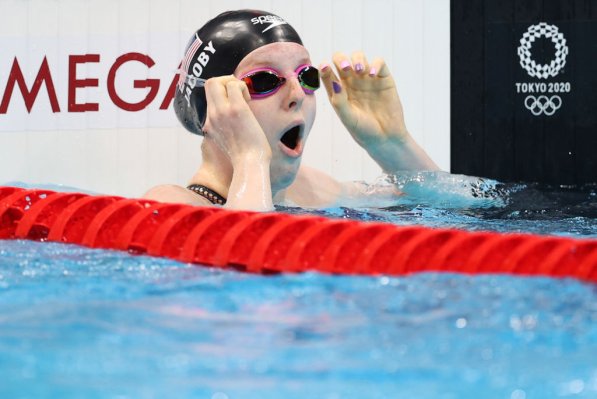