'I Try Not to Overthink It.' After Mental Health Break, Naomi Osaka Just Keeps Winning

Naomi Osaka circled her neck while hopping up and down on Monday morning in Tokyo, moments before the start her second round Olympic match against Switzerland’s Viktorija Golubic. She was loosening up, and sure seemed plenty loose while unleashing those 105 miles per-hours serves soon after.

Osaka, who plays for Japan and received the high honor of lighting the Olympic cauldron at the Opening Ceremonies Friday night, cruised to a 6-3, 6-2 over Golubic, a 2021 Wimbledon quarterfinalist, on Monday to move into the third round.

She still has plenty of work to do before an Olympic gold medal hangs around her neck. But, it’s hard to imagine her high-profile break from tennis that began at the French Open in May working out any better. On the court, her game looks as crisp as ever. At 2-2 in the first set Osaka ripped two backhand winners down the left baseline, developing a sweet spot that left Golubic helpless. Courteous as ever, Osaka yelled “I’m sorry” when a ball she lofted in the air for a serve wasn’t to her liking, forcing a do-over.

Up 4-3 in the first set with Goublic on serve, Osaka unleashed a nasty cross-court backhand winner that felt like a potential turning point of the match. Osaka now had break point; no player had broken serve in the set. Goublic fought back, only to have Osaka fire a similar devastating shot to finally break her. Osaka served out for the set. In the second set, Osaka ate Goublic’s soft serves for breakfast, lunch, and dinner; Osaka let out a “Come On!” after one nice shot.

“I played better today,” Osaka, who beat China’s Saisai Zheng 6-1, 6-4 in the first round, said after the match. “I think my movement was better and I was more familiar with what I wanted to do.”

She’s showing no rust, only the benefits of rest. Off the court, her decision to step away from tennis between the French Open and the Olympics—Osaka also skipped Wimbledon—proved controversial in some circles and touched off a broader discussion on the importance of maintaining mental health, both inside and outside of sports. “It’s O.K. to not be O.K.,” Osaka wrote in a recent cover essay for TIME. “Michael Phelps told me that by speaking up I may have saved a life. If that’s true, then it was all worth it.”

On Monday she faced the press, the original source of her consternation at the French Open. After Osaka announced that she was going to skip press conferences because of their potential damage to her mental health, she was fined by French Open officials. She then backed out of the tournament altogether, citing anxiety and a desire to tend to her well-being and prepare for the Olympics. “I’ll say it again for those at the back,” Osaka wrote in TIME. “I love the press; I do not love all press conferences.”

After preliminary round matches at the Olympics, athletes don’t have to endure formal press conferences; instead, they are shuffled through a “mixed zone,” and stop at various stations to briefly chat with groups of reporters from around the world. She smiled during a broadcast interview and seemed relaxed when stepping up to take two questions—only two—from a group of American reporters. It’s not the best format for drawing revealing insights from athletes; one-on-one interviews do a better job of that. But for the athletes, at least they’re moving along instead of sitting in a staid conference room under the glare of all those cameras.

READ MORE: ‘This Will 100% Save Somebody’s Life.’ Athletes See a Turning Point for Mental Health After Naomi Osaka Takes a Stand at the French Open

Osaka said that she’s kept an eye on her competition, watching the tournaments she missed during her break. She was also asked if the lack of fans in the Tokyo seats would affect her. Though she won a spectator-free U.S. Open in New York last summer, many athletes feed off energy and noise. And the Olympics only happen once every four years; the empty stands in Tokyo have cast a pall on these games.

Inside the Ariake Tennis Park, with one of the most accomplished athletes on the planet—who also happens to hail from the host country—doing her thing, the cicadas made the most noise.

“There’s this different atmosphere,” she said. “But I try not to overthink it. Because then I get nervous.”

For Naomi Osaka, the free-mind formula has paid off. 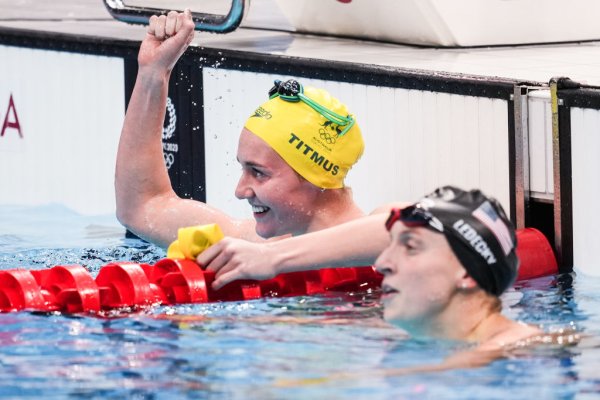