Over the past few weeks Team USA hammer thrower Gwen Berry, who will be making her second Olympic appearance in Tokyo, has faced some fervent criticism from conservatives; at the U.S. Olympic Track and Field Trials on June 26, during the playing of the national anthem, she turned away from the American flag while on the medals podium. “So for the record, first, I turned every which way,” Berry said during an interview for an Olympic-themed episode of TIME100 Talks that aired Friday. “I didn’t just turn the opposite way. I was turning around during the singing of the national anthem.”

So why did she turn? “I just don’t respect something that doesn’t stand for all people,” says Berry, who finished third at trials. “Especially minorities in America. I feel like we know the story. Blacks get the worst treatment here. We are not treated as human beings. Our lives are not regarded. They’re not precious. And I feel like in order for me to respect a song that sings about liberty and justice for us all, I have to actually see that and experience it.”

Republican congressman Dan Crenshaw of Texas called for Berry to be “removed from the team.” A North Korean defector criticized her demonstration as “unthinkable.” Nikki Haley, the former South Carolina governor who was U.S. Ambassador the U.N. in the Trump Administration, said that the United States Olympic and Paralympic Committee (USOPC) “should make sure that no one should go to the Olympics that does not want to represent America.”

Berry believes her intentions are misunderstood. “First and foremost, my response to [the criticism] is I earned my right on that podium, I earned my right on the team,” she says. “I’m not saying I’m not proud to represent America. If anything, I am bring extremely American by stating my rights. By exercising my constitutional right to say, I believe in freedom and justice for us all. And if I don’t see it, I have a right to peacefully protest until I see what I know America is capable of. I am protesting for America to be good for everybody. And just not for the elite or the white supreme.”

She’s familiar with such backlash; at the 2019 Pan American Games, Berry raised a fist on the medals stand. It cost her. “Literally within an hour, I lost sponsors,” she says. “I was immediately threatened, defunded, everything.” Berry says she lost the majority of her salary and relied on family support. Recently, however, with the help of racial justice organization Color of Change, Berry did receive a $15,000 sponsorship from Puma.

The International Olympic Committee (IOC) recently tweaked its rule banning protests at competitions: athletes may now demonstrate on the field of play before a competition, but are still prohibited from protesting on the podium. Berry doesn’t believe the IOC went far enough. “Protest on a podium … it is a human right,” says Berry. “It is not for the IOC to decide. I feel like they are giving us a little bit to avoid controversy, to avoid risks and losing their sponsors. However, it is not for them to decide. It is not their place.” Berry says she doesn’t have any set plans to protest in Tokyo, but she won’t rule anything out.

Berry won’t be silenced. “I have been true to this for the last two years, maybe more,” says Berry. “I’ve always been a speaker for my community. Being a young teenage mother, I’ve always had to speak for my son and make sure my son was safe. So this time around, it’s no different. I feel like I see how dirty people can be, and how evil people can be. But I’m steadfast. I won’t shut up. And I will keep on bringing acknowledgment and awareness to the things that are going on in our communities.” 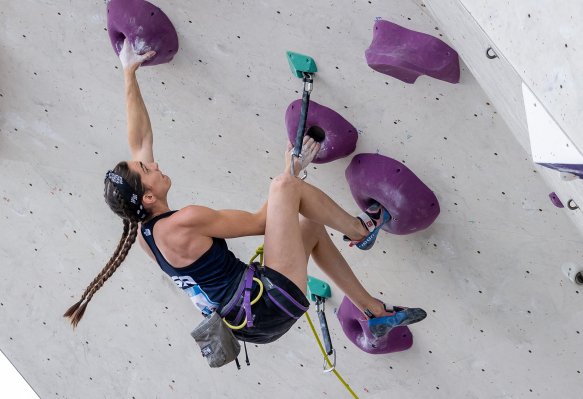