Laurel Hubbard of New Zealand competes in the Women's +90kg Final during the Weightlifting on day five of the Gold Coast 2018 Commonwealth Games at Carrara Sports and Leisure Centre on the Gold Coast, Australia on April 9, 2018.
Scott Barbour—Getty Images
By Amy Gunia

More than 120 out lesbian, gay, bisexual, transgender, queer and nonbinary athletes will compete in the Tokyo Olympics, making this year’s Games the most inclusive in history, according to a new report compiled by news outlet Outsports.

The website—whose list includes athletes that have come out to the media or are out on social media sites—has so far counted 121 out LGBTQ athletes who are set to travel to Japan for the Olympics, which begin on July 23. That’s a significant increase from the 56 out LGBTQ athletes Outsports counted at the 2016 Rio Games, and the 23 out Olympians in the 2012 Summer Games.

The list includes Laurel Hubbard, who will be the first transgender athlete to compete in the modern Olympics. The 43-year-old weightlifter will compete for New Zealand in the women’s over-87-kg category.

“Every out and proud athlete is a beacon for others who haven’t yet come out, or who are unsure if they can be their full self and play the sport they love,” says Joanna Hoffman, the director of communications at Athlete Ally, a U.S.-based non-profit advocacy group.

Poppy Starr Olsen is among the 121 athletes on Outsports’ list, will represent Australia in skateboarding’s debut at the Olympics. She tells TIME that it’s harder for elite athletes and others in public positions to come out. “You have a lot of eyes on you, it’s terrifying for a lot of people, but if you’re under a bit of a spotlight you have to come out to a lot more people and that can be very daunting,” she says.

Read More: 48 Athletes to Watch at the Tokyo Olympics

Hoffman says that the increasing number of LGBTQ athletes might help lead to meaningful change—at least in the sporting world. “Perhaps most importantly, [LGBTQ athletes] help to encourage teams and leagues to institutionalize inclusivity, so that athletes know they’re in a safe and welcoming environment where they can come out and where discrimination is not tolerated.”

She adds that there is work to be done, including things like making it known that harmful “locker room talk” isn’t accepted. “It is critical that teams and leagues adopt a zero tolerance policy for anti-LGBTQ+ language and instill in coaches and players from the get-go that words matter, and that we all have a role to play in ensuring that sport is truly welcoming for all.”

Skateboarder Starr Olsen says that she hopes that the record number of LGBTQ athletes competing in this year’s Games can help act as role models for younger LGBTQ people. “It can only inspire the next generation, and show them that we’re so comfortable in our bodies,” she says. “There’s so many of us in this thing. You’re not alone.”

Read More: Japan Failed to Improve LGBTQ Rights Ahead of the Olympics. Japanese Athletes Are Coming Out Anyway

The list compiled by Outsports includes athletes from at least 25 countries who will compete in 26 different sports. Thirty of the 121 athletes will represent the U.S.—making it the country with the highest number of out LGBTQ athletes.

But so far, none of the LGBTQ Olympians participating this year will represent host country Japan. The nation of 126 million people lags far behind its rich-world peers in LGBTQ rights. Same-sex marriage has not been legalized, there is limited legal recognition for same-sex couples and few protections against discrimination in the workplace or in public. Japanese law also requires transgender people to be surgically sterilized if they want legal recognition of their gender identity.

Japanese LGBTQ activists and athletes had hoped that the Games, whose charter forbids “discrimination of any kind,” would be a catalyst for their government to enact a law to protect LGBTQ people from discrimination. But after the bill sparked fierce backlash from some conservative politicians, the Diet, Japan’s parliament, recessed in June without passing any legislation to protect gay or transgender people ahead of the Olympics. 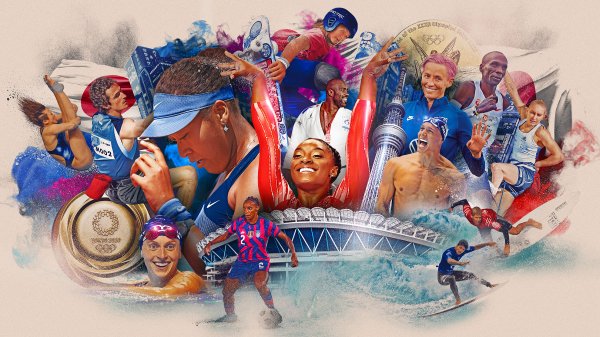 48 Athletes to Watch at the Tokyo Olympics
Next Up: Editor's Pick