My Son Was Killed at Sandy Hook. I Can’t Go Back in Time, But I Can Try to Change the Future

A makeshift memorial with crosses for the victims of the Sandy Hook massacre stands outside a home in Newtown, Conn., on Dec. 14, 2013, the one-year anniversary of the shootings.
Robert F. Bukaty—AP
Ideas
By Nicole Hockley
Hockley, whose son Dylan was killed at Sandy Hook Elementary School, is a cofounder and the managing director of Sandy Hook Promise.

On December 3rd, a Facebook memory from seven years ago appeared on my timeline. Captioned simply “The boys,” it showed my sons Jake and Dylan playing in our backyard in England, on a surprisingly snowy day.

For most parents, the memory of that photo would be innocuous. But when I saw the photo, I started weeping. Then I shared the photo, with a new caption formed from the only words on my mind: “Seven years ago on a snowy day in England. One month later we would move to the United States. I would do anything to be at this day again and make a different choice.”

I didn’t make a different choice. My little family moved back to the States, settling in Newtown, Conn. Less than two years later, both of my sons would be at Sandy Hook School on Dec. 14, 2012. Jake, my eldest and in third grade at the time, would later recall the sounds he heard over the school’s intercom, saying he thought it was a lot of metal chairs crashing over. Someday, he will process what he heard differently and realize that he did not hear chairs but an AR-15 shooting 154 bullets in less than five minutes. What he heard was his little 6-year-old brother, Dylan, being shot to death in his first-grade classroom alongside 19 of his classmates and 6 of his educators.

Over the last five years, I have often wondered what I could have done differently, so that Dylan would still be alive. What if we hadn’t moved, or what if I had just kept him home from school that day? I know some of these thoughts are also in Jake’s mind. He once told me he wanted to be an inventor. When I asked what he would invent, he immediately answered, “A time machine, so I can go back and change things so they don’t happen.”

None of us can go back — but we can make different choices going forward.

The more I learned about the shooting at Sandy Hook School, the more I came to realize that it was preventable. Police reports showed that the shooter exhibited warning signs and signals throughout his life that were either not understood or not acted on. Imagine if one person had intervened on the shooter — Dylan might be alive today. Sadly, whenever I hear of other mass shootings, from San Bernardino to Charleston, from Orlando to Sutherland Springs, I know we all share the same thing in common. All of these tragedies had warning signs — all were missed or ignored.

It is for this reason that the organization I helped launch and lead, Sandy Hook Promise, focuses on identifying, intervening and getting help for individuals at-risk of hurting themselves or others. We do this by training — at no cost — students, parents and educators across the country, in our four evidenced-based Know the Signs programs.

In just three years since we launched our programs, we have trained over 2.5 million youth and adults in over 4,000 schools from all 50 states.

What’s more important than the number of youth and adults reached, is the lives saved and intervened upon. To date, our programs have averted multiple mass-shooting, suicide and firearm threats. They’ve also significantly reduced incidents of bullying, firearms in schools and other threats of violence — in addition to getting hundreds of kids the mental health support services that they need.

This week, as part of our five-year remembrance, we launched a new PSA called “Tomorrow’s News.” In a script that reads like almost every newscast after a mass shooting, we hear about a school shooting that is going to happen the next day. As the reporter interviews people impacted by the shooting, we learn about the warning signs and signals that were missed, with students and teachers saying, “I’ll wish I had said something.”

Although it’s talking about an event that has not yet happened, it’s almost too true to life. That notion and the impact revealed at the end of the PSA make some people uncomfortable when they first watch it.

It should. It should make everyone uncomfortable.

Gun violence is not comfortable, and sadly it feels sometimes like too many people in our country are comfortable with the endless tragedies and loss of life we keep experiencing. We’re becoming too socially desensitized; too comfortable with feeling compassion in our hearts and offering thoughts and prayers, without taking action to back it up; too comfortable saying it’s too soon to talk about solutions. We seem to be accepting gun violence as the norm for living in America. The news-life of a mass shooting gets shorter every time, while every day shootings almost go completely unreported.

Being comfortable could make you end up like me. I would rather have someone watching this PSA be uncomfortable yet compelled to take action than be like me, living a lifetime of being uncomfortable without my baby boy.

Under no circumstance should we be “comfortable” when more than 30,000 people die each year due to gun violence, including suicide, especially when there are actions we can take to prevent them.

I was at a middle school in Texas last year, when a girl asked me, “Though you are helping people and saving lives, would you take it all away to go back in time and save your son?” The question made me hesitate. It was a huge question, asked innocently, but I didn’t want to offend her with my answer. I answered honestly, “Of course I would go back and save my son. I’m sorry if that sounds selfish, but I would do anything to have him back and for that day to have never happened.”

Instead, we can go forward, armed with the knowledge of how to know the signs of someone who may be a threat to themselves or others. It is that knowledge, that power that means we can prevent tomorrow’s tragedies before they take place. 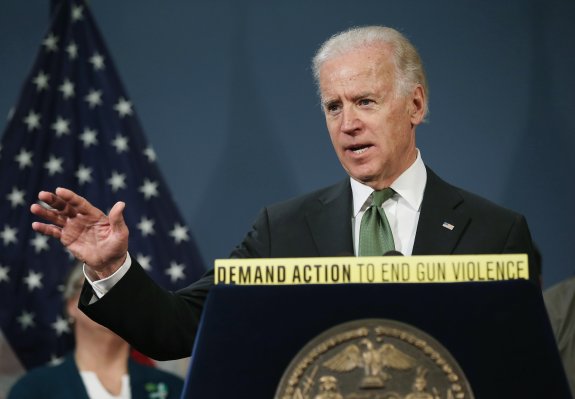 How the Sandy Hook Families Give Me Strength
Next Up: Editor's Pick