Beyond Meat CEO Ethan Brown on a Plant-Based Future, Climate Change and Returning to the Office

Ethan Brown, the chief executive officer of Beyond Meat, is eager to work with his colleagues in the office again. “I have very strong feelings on this,” he said in a recent interview from the company’s headquarters in El Segundo, Calif. “It’s time. It’s past time.”

Along with being the CEO, Brown is also the founder of Beyond Meat, a leading player in the up-and-coming plant-based-meat category. “We have a massive undertaking that we’re doing, in terms of the complexity of it, and it’s really hard to do that when people are remote,” he says. The company continues to expand its growing line of popular burgers, sausages and meatballs, recently adding a plant-based “chicken tenders” offering. “I need to have people here because Zoom is an amazing technology, conference calls are great, emails are good, but this is intense stuff, and we need to be together, looking eye-to-eye.”

Despite the limitations of remote work (Brown continued to go to the office throughout the pandemic, and the company’s research-and-operations centers remained open as well), Beyond Meat made steady progress in its efforts to push plant-based meat into the mainstream in the past 15 months. Since January 2021, the company has announced major partnerships with McDonald’s, on its McPlant burger; PepsiCo; and Yum! Brands. It also opened a factory near Shanghai, where it has a partnership with Yum China.

Brown, whose Beyond Meat shares are worth more than $500 million after the company’s 2019 IPO, also discussed how plant-based meat became a flashpoint in the culture wars, the environmental benefits of producing less beef and how the labor shortage is affecting his business.

California is experiencing a scorching drought right now. How does that affect the food supply, and what are the ramifications for a company like yours?

I can’t help but hope that people are drawing the connection between the temperatures that they’re feeling, and the drought that’s occurring and their food choices, particularly the center-of-the-plate protein. I spent the weekend with my son and his high school basketball team outside of Phoenix, and it was so hot that homeless people were on the edge of the road begging for cold water. It was out of some sort of apocalyptic scene. We’re starting to see these early indications, not so early anymore, of the instability that we’ve created in the climate. The connection is 100% clear to people. For agricultural practices that are heavily reliant on water and the inefficient use of water, there has to be change, and I think people are starting to realize that.

This is fairly well known by now, but can you outline the impact of beef production on the environment?

I was working in the clean-tech sector, clean energy, because I felt that was the biggest issue for the climate, particularly fuel for transportation. It turned out that any objective analysis puts livestock right up there, and in fact, many will have it surpassing transportation in terms of the most important problem that we need to affect from a climate perspective. Cattle and livestock is the right point of focus if we want to solve the climate issue. I’m trying to be as careful as I can. I don’t want to demonize the livestock industry.

What precisely makes beef so harmful to the environment?

It’s the amount of land, energy and water, and then the emissions: those are the items that we have to be concerned about. We have really good numbers there that show that we use 93% less land to grow “a burger” than you would use if you were using livestock. We use 99% less water and 90% fewer emissions.

Anecdotally, many of the young people I know have dramatically cut back their consumption of red meat.

I think there’s a cultural moment that [Beyond Meat is] tapping into. We cannot keep doing things the way that we used to. I love this generation. The idea that you can build a piece of meat from plants can make sense to them. They’re so open to it in a way that older folks need more convincing.

Do you anticipate a day when beef won’t be eaten?

Probably not. I think there will always be parts of the world where animals will be consumed. But I do think the numbers are going to come down dramatically.

Why has meat consumption become part of the culture war, an ideological issue?

It’s a difficult thing to tell someone that what they’re eating and what they’re doing may not be the best thing. [T]he consumption of meat is so ingrained in our society, and it’s so tightly tied to perceptions of who we are: everything from masculinity to traditions around Christmas and holidays. Whatever religion you are often centers around the consumption of some type of meat. And so you’re striking at people’s fabric when you talk about these choices.

Are the current labor shortages having an impact on your business?

A lot of the quick-serve restaurants are scaling back their menus and just focusing on core menu items, which obviously didn’t help us. A lot of the launches that we had expected to do coming right out of the pandemic are delayed because the customers are having trouble getting employees.

The so-called Center for Consumer Freedom ran an ad during the 2020 Super Bowl claiming that synthetic meat contains dozens of chemical ingredients and suggesting that one ingredient was also used in laxatives.

The thing that does bother me is the comment about the complexity of the ingredient label. That’s sleight-of-hand stuff, because if I required you to list out all the vitamins and amino acids and nutrients in a piece of steak, it’d be a very long list, of which you and I probably would be able to pronounce half of them. So, you know, just being able to say beef vs. listing out all those technical terms is a big advantage. It’s mostly noise, and it’s up to us to educate the best we can. My kids eat more of this product than probably anyone on earth. I’ve said this many times but nobody had to lambaste or denigrate the landline [when the cell phone came along]. We just came up with a better technology.

How do you actually make this stuff?

It’s really just a new way of creating meat. Our process is one of pulling protein directly from plants. A cow is collecting all kinds of grass, drinking water, and then they’re consuming that, then they’re breaking it down into constituent parts, and they’re building muscle out of that. What we’re doing is starting with the same thing. We’re starting with vegetation in a field, and instead of running that through the digestive tract of an animal, we’re simply extracting directly the amino acids, extracting directly the fats and extracting directly the vitamins and minerals… Then we mix it with the flavor. The aroma and taste of meat is driven by over 4,000 molecules, but they’re identifiable. And we have all this crazy equipment that allows us to separate out the molecules, characterize them and try to match them with molecules and plants.

What’s it like as a West Coast startup, and all that entails, to work with McDonald’s?

There’s some interesting things ahead. Things kind of move in the planning phase, and all of a sudden you start to see activity. Obviously, I like the activity phase of that. But they’ve been good to work with. That’s all I can say.

What’s the most challenging part of what you are doing: creating a new market or creating the product?

For me, getting the innovation that’s in our labs to market is the most difficult part, and it’s the most difficult part for any business. I spoke at Tesla a couple years ago, and I enjoyed the fact that I was with people who knew how hard it is to commercialize. There was a sense of shared recognition that scaling something that is new for the market that is really special and new, not not just another knockoff … It’s difficult and there’s going to be a lot of failure and it’s gonna be a lot of frustration. A lot of our products are very good, but we have stuff in our labs—it’s a lot better. My wish, and my focus on the company is how do we speed the path to market for innovation? We innovate very quickly, we commercialize at a rate that I need to match that innovation, and that’s that’s what I’m working on.

What slows you down?

So there’s a great book that I liked a lot by Safi Bahcall called Loonshots: How to Nurture the Crazy Ideas That Win Wars, Cure Diseases, and Transform Industries, and the way that he talks about this is getting artists and soldiers to work really well together. We call our research center here the Manhattan Beach project … I like that balance of a General Groves and an Oppenheimer. You desperately need both of them. You need to marry those two capabilities and then give them the room to flourish and the resources to flourish. It’s moving cement and metal at a speed that is commensurate with the molecules that you’re moving in your lab.

How do you speed up that process?

It’s really hard to do. It’s maddening stuff, like long lead time for equipment. You know you have a solution that you want to get to market, and then you talk to some equipment supplier in Germany and they say, “That’s going to take you eight months.” And you say you can’t take eight months, and you go from there.

In June, you brought in three high-level outsiders, including a new CFO. What prompted that?

When you have an IPO event, people make money. The people that left, all three of them are not working. 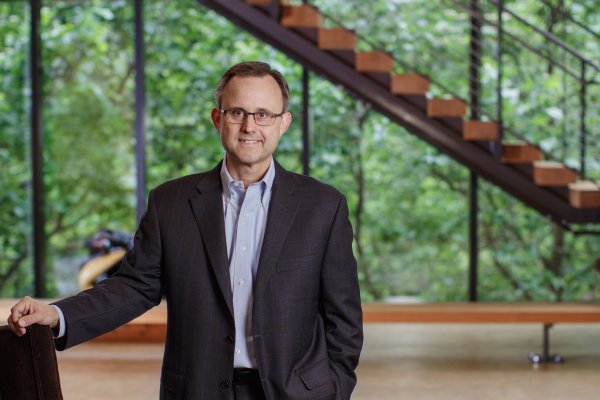 Weyerhaeuser CEO on the Housing Boom and Climate Change
Next Up: Editor's Pick