Lifestyle Changes Aren’t Enough to Save the Planet. Here’s What Could

Ideas
By Michael E. Mann
Michael E. Mann is distinguished professor of atmospheric science and director of the Earth System Science Center at Penn State University. He is author of the recently released book, The New Climate War: The Fight to Take Back our Planet.
Harry Campbell for TIME

Everyone faces choices every day that carry a climate cost. Do we turn the lights on in the morning, or is the light of daybreak sufficient for finding matching socks? Do we feast on bacon and eggs for breakfast, or will a bowl of oatmeal suffice? There is a lot of talk these days about the need to lead lower-carbon lifestyles. There is also a lot of finger-pointing going on and, some argue, virtue signaling. But who is truly walking the climate walk? The carnivore who doesn’t fly? The vegan who travels to see family abroad? If nobody is without carbon sin, who gets to cast the first lump of coal? If all climate advocates were expected to live off the grid, eating only what they could grow themselves and wearing only the clothes they’d knitted from scratch, there wouldn’t be much of a climate movement. That level of sacrifice is unacceptable to most.

We don’t need to ban cars; we need to electrify them (and we need that electricity to come from clean energy). We don’t need to ban burgers; we need climate-friendly beef. To spur these changes, we need to put a price on carbon, to incentivize polluters to invest in these solutions. Though air travel accounts for only a paltry 2% of global emissions, whether or not climate scientists should fly consumes far more than 2% of my Twitter timeline. Unfortunately, sometimes doing science means traveling great distances, and we don’t always have the time or luxury to take slower low-carbon options. We have a job to do, after all. But even still, a single scientist, or even hundreds of scientists, choosing to never fly again is not going to change the system. Purchasing carbon offsets for flights is a viable means of decarbonizing your air travel, for now. However, the true solution, pricing carbon, requires policy change.

There is a long history of industry-funded “deflection campaigns” aimed to divert attention from big polluters and place the burden on individuals. Individual action is important and something we should all champion. But appearing to force Americans to give up meat, or travel, or other things central to the lifestyle they’ve chosen to live is politically dangerous: it plays right into the hands of climate-change deniers whose strategy tends to be to portray climate champions as freedom-hating totalitarians.

The bigger issue is that focusing on individual choices around air travel and beef consumption heightens the risk of losing sight of the gorilla in the room: civilization’s reliance on fossil fuels for energy and transport overall, which accounts for roughly two-thirds of global carbon emissions. We need systemic changes that will reduce everyone’s carbon footprint, whether or not they care. The good news is we have tactics to bring environmentally friendly (and non-lifestyle-disrupting) options to fruition­: pricing carbon emissions and creating incentives for renewable energy and reduced consumption. By putting a price on carbon, people can actually make money by reducing emissions, selling their services to corporations that are always looking for ways to cut costs. Never underestimate the resourcefulness of Americans when there’s a dime to be made! But a price on carbon needs to be designed such that marginalized communities most at risk from climate impacts aren’t adversely impacted economically as well.

This is why we really need political change at every level, from local leaders to federal legislators all the way up to the President. We need change not just at the breakfast table, but at the ballot box as well. 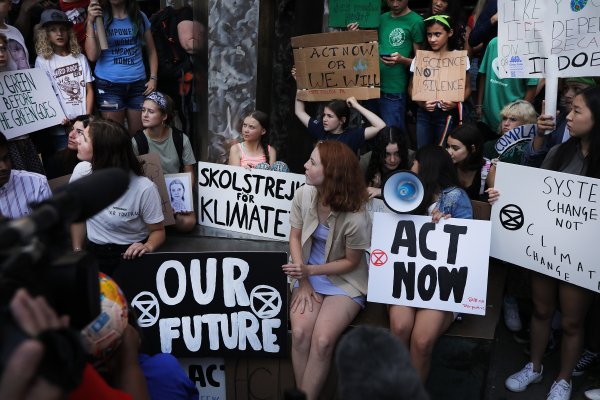 Meet 15 Women Leading the Fight Against Climate Change
Next Up: Editor's Pick