Hamburgers Have Been Conscripted Into the Fight Over the Green New Deal. The History of American Beef Shows Why

Hamburgers are the newest front in the culture wars. At the 2019 Conservative Political Action Conference (CPAC), Sen. Ted Cruz announced, “I support cows…I hope to see PETA supporting the Republican Party, now that the Democrats want to kill all the cows.” And Sebastian Gorka, a former Trump administration official and frequent Fox News guest, similarly announced that “they want to take away your hamburgers. This is what Stalin dreamt about but never achieved.”

Their comments came in response to Democrats’ recently unveiled Green New Deal, which cites the agricultural sector as one of many industries that needs to adjust to limit climate change. Beef in particular has become a focus of that idea, due to its inclusion in a draft fact-sheet about the resolution, as well as local efforts to cut back on consumption and advocates’ efforts to highlight the impact of meat-eating on global carbon emissions.

Though perhaps extreme, the line of argument seen at CPAC is quite clever: it responds to criticism of meat production with a defense of meat consumption, about which people feel understandably sensitive. The argument starts from a kernel of truth — policies intended to mitigate the environmental impact of beef production would likely affect consumer prices — but it uses this observation to defend an increasingly unsustainable status quo. Interestingly, this approach draws directly from arguments that food processors pioneered in the late 19th century.

During the 1880s and 1890s, four firms headquartered in Chicago would come to directly and indirectly control most of the United States’ beef. They did so by pushing the social and environmental costs of meat production onto ranchers and farmers, allowing the meatpackers to both increase profits and lower consumer prices. Over time, every part of American food production became organized around a logic of relentless price-cutting. This was incredibly successful — by 1900, it made cheap and abundant meat the norm for all Americans. But it also made it hard to address the negative impacts of this system of food production; prices had become so low that processors could rightfully argue that any reform would increase prices, hurting consumers.

The Chicago meatpacking firms took direct or indirect control of the entire beef supply chain with a series of innovations that were as clever as they were ruthless. The first was a strategy of dealing with live animals for as short a time as possible. Unlike ranchers who had to worry about the unpredictability of nature — blizzards, droughts and disease — meatpackers shouldered none of the risk of raising an animal. The packers also began to operate in multiple cattle markets at once, telegraphing prices between cities like Chicago and Kansas City. If they didn’t like prices in one city, they could easily buy in another. Meanwhile the ranchers who owned a herd of hungry and thirsty animals faced steep costs to move their herd to another market. Worse yet, the Chicago firms rarely bid against each other, informally colluding to minimize competition. On the distribution end, the meatpackers used predatory pricing of their chilled beef to undercut butchers in towns across America. Finally, the Chicago firms developed cattle disassembly lines that dramatically increased processing speeds at the cost of worker safety and health.

When ranchers, local butchers and slaughterhouse workers tried to fight back, the meatpackers mounted an ingenious defense. Speaking to Senate investigators studying beef prices in 1889, meatpacker Philip Danforth Armour argued that, in the new world of centralized meatpacking, it was only through the meatpackers’ efforts that regular fresh beef consumption could spread to the “artisans and laborers of the east and north.” Armour positioned himself and his colleagues as champions of the people. In later Senate testimony, reformers were forced to concede that their proposals would increase prices. The small-town butchers ended up sounding like elitists, one lamenting that “a man earning a dollar or a dollar and a quarter a day will demand porterhouse steak.” The meatpackers had transformed criticism of production into a conversation about consumption.

Today, reformers find themselves in the same situation as these small-town butchers. There are very real ways to mitigate the effects of beef production on climate change, but they will raise costs. For instance, “adaptive multi-paddock grazing,” which involves moving cattle frequently to prevent habitat destruction, could somewhat mitigate beef’s climate impact. Similarly, restricting the destruction of global forests to produce new grazing land could dramatically limit beef-related carbon emissions. And while eating less meat is almost assuredly key to a long-term solution, these short or medium-term reforms are needed to give the time for diets and household food budgets to adjust.

Perhaps taking the concerns of the 19th century meatpackers and their 2019 CPAC descendants at face value points to an even more ambitious agenda: pairing environmental justice with economic justice. Fixing the problems with food production and climate change would require radically transforming a system that was founded on cutting prices at all costs — but it would also require transforming an economic system that would put sustainably produced products out of reach of the average consumer.

Joshua Specht is the author of Red Meat Republic: A Hoof-to-Table History of How Beef Changed America, available now from Princeton University Press. 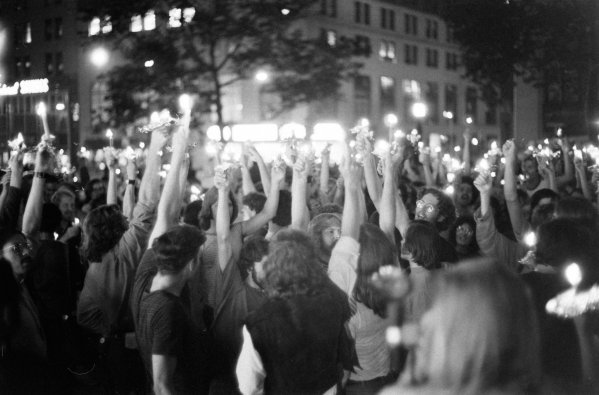 50 Years After Stonewall, We’re Still Disagreeing About What Happened There. That’s Why the Archives Matter
Next Up: Editor's Pick