Almost nothing is clear at the start of Steven Soderbergh’s playful but pointed neo-noir No Sudden Move, set in 1954 Detroit: Ex-con Curt Goynes (Don Cheadle) accepts a fishy-sounding job from a mysterious middleman known as Jones (Brendan Fraser). All he has to do is “babysit” a family while another one of Jones’ guys escorts the head of the household, a midlevel auto executive, to his office to retrieve a piece of secret paperwork from a safe. It’s one of those what’s-going-on? setups that throws you in at the deep end.

But part of the fun of No Sudden Move is that we figure out what’s going on almost as the characters do. The story—from a script by veteran screenwriter Ed Solomon—rarely follows a straight, definitive line. Instead, it backtracks and turns unexpected corners, eventually filling in a dramatic tapestry of corporate intrigue and greed, miserable if seemingly perfect families, and the damning insecurities and machinations of white people. (One character in the film refers to “urban renewal” as “Negro removal.”) No Sudden Move riffs on stereotypes of the 1950s, even as it suggests we haven’t come as far as we might think.

Once Goynes signs on to the supposedly simple job Jones sketches for him, he’s matched with Ronald Russo (Benecio Del Toro), a lackadaisical thug who makes it clear he’s none too happy to be working with a Black guy, and a hothead named Charley (Kieran Culkin), who’ll be in charge of escorting that unfortunate auto exec, Matt Wertz (David Harbour), to the office. Meanwhile, Goynes and Russo—having invaded the tidy but claustrophobically wallpapered Wertz home wearing ridiculous masks that make them look like Lone Ranger rejects—keep an eye on Wertz’s family, holding them casually at gunpoint. For reasons the movie hints at early on, wife Mary (Amy Seimetz) is coming unglued; she lights one jittery cigarette after another, her eyes darting about sharply, as her older child, the adolescent Matthew (Noah Jupe), hovers protectively nearby. The house they live in is pure 1950s in its manicured averageness—yet it also seems too small to hold them and all their subterranean problems. Goynes, Russo, and all the other men who set foot in it at one time or another (including a possibly shifty, possibly stalwart detective, played by Jon Hamm) seem way too large for its modest frame.

What happens in that house is barely the beginning of No Sudden Move. Later we’ll meet two crime bosses, one hotheaded (Ray Liotta) and another who couldn’t be cooler (the always wonderful Bill Duke), as well as an auto-industry honcho played by a star, a Soderbergh regular whose name you can choose to guess, or not. Soderbergh navigates the story’s intricate zigging and zagging deftly; he also shot the film himself (using his favored alias Peter Andrews), tossing in a suitable number of noirish low angles.

But watching Cheadle may be the movie’s biggest pleasure. In one stunningly quiet scene, Goynes picks up a suitcase he’s stashed with a woman from his past, played by Lauren LaStrada. We don’t know much about what’s happened between them. And yet, from their faces we know everything—and then we learn even more when we hear a baby crying in another room, a noisy marker of this woman’s current life, one that can’t include Goynes. No Sudden Move is great fun to watch, but in this moment, Cheadle cuts through the film’s clever jauntiness and drifts toward another movie, one that exists only between the lines of this one. Words are important in No Sudden Move. But in a scene lasting all of five minutes, Cheadle’s face tells a whole story without them. 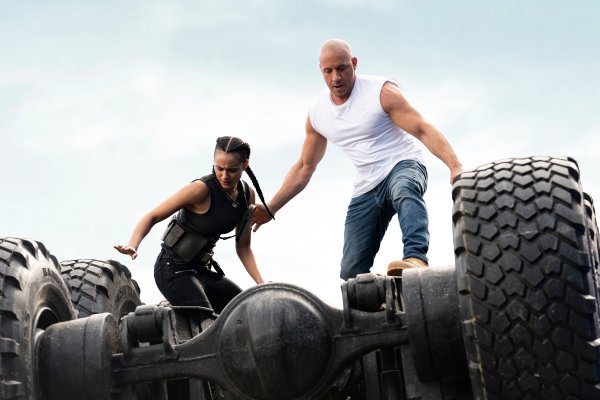 What F9's Box Office Hail Means for the Movies
Next Up: Editor's Pick