What’s the Point of Trying to Understand Ghislaine Maxwell?

People are curious about Ghislaine Maxwell. Who is the British socialite who allegedly enabled, coordinated and in some cases participated physically in the super-rich, unnervingly well-connected late financier Jeffrey Epstein’s alleged suite of sex crimes? And how did she become that inscrutable, widely reviled person?

Epstein’s Shadow: Ghislaine Maxwell, a three-part docuseries streaming on Peacock, offers plenty of potential answers to these questions. Interviews with former friends, alleged victims and reporters on both sides of the Atlantic describe Maxwell as a party girl, a sophisticated connector, “a good actress,” a woman determined to live in ostentatious luxury. One interlocutor frames the young Ghislaine, devastatingly, as “the ultimate daddy’s girl.” Mercurial and sometimes vicious as an employer, in high-society settings she could be “impossibly fun.” The Daily Mail made a meal out of a recollection in the doc from aristocratic reality TV star Lady Victoria Hervey that Maxwell had a X-rated sense of humor.

You can see why this kind of character shading—and the armchair psychoanalysis that comes with it—might be intriguing to many who watched in horror as the Epstein saga unfolded. I don’t think such curiosity is entirely prurient, either. Of course people want to know what could go so wrong in an apparently smart, extraordinarily privileged woman’s life that would lead her to spend years allegedly orchestrating a sex trafficking conspiracy whose victims were other women and underage girls. Understanding how atrocities happen is crucial to preventing their recurrence. To that end, though, I’m not sure Epstein’s Shadow is asking the right question. Maxwell certainly makes a fascinating villain. But what’s the point of searching her psyche for answers when the more constructive way of understanding the Epstein case is as an extreme example of our criminal justice system failing to hold powerful people accountable?

To the credit of director Barbara Shearer, there is more to Epstein’s Shadow than gossip and pop psychology. It begins with a fairly thorough account of Maxwell’s early life. Born in 1961, she was the youngest and perhaps most beloved of Holocaust refugee turned British media mogul Robert Maxwell’s nine children. Her Oxford classmate, author Anna Pasternak, recalls that, as a result of her closeness with her notoriously difficult father, Ghislaine “learned to read powerful men’s moods.” Like her older siblings, she got absorbed into the family business—an international portfolio of media properties that would eventually include the New York Daily News; unlike them, she played an informal role as a sort of social liaison for her father. In that capacity, she was said to appear on his arm more often than even her mother, Betty.

So, of course, Robert Maxwell’s mysterious death at sea in 1991—aboard a private yacht he christened the Lady Ghislaine, no less—altered the course of his daughter’s life. Always a shady, controversial figure, the patriarch was posthumously revealed to have plundered his employees’ pension funds to avoid bankruptcy. With the family’s empire and reputation in ruins, Ghislaine Maxwell fled Britain for New York, where society types apparently had a higher tolerance for the moral shortcomings of the ultra-wealthy. Though she still ran with a posh crowd, her material circumstances were much diminished. Enter Epstein, an old business contact of her father’s, whose short-lived romance with Maxwell gave way to a very different, allegedly monstrous kind of mutually beneficial arrangement.

This isn’t exactly an untold story. And what follows—a summary of the charges against Epstein and particularly Maxwell, followed by accounts of his death, her disappearance and her arrest in New Hampshire last July—will surely be even more familiar to most who seek out this doc. Because she won’t face trial until November, on eight counts including sex trafficking, we don’t know yet what will become of Maxwell. (She maintains her innocence, pleaded not guilty to all charges and, according to a prefatory note, did not respond to interview requests for the series.) There is in fact a remarkable amount that remains unknown about Maxwell, from her fluctuating financial circumstances to her personal life post-Epstein; Shearer notes her father’s complicated entanglement with various intelligence agencies and entertains speculation on whether she might’ve carried on these relationships. For all its redundancy, Epstein’s Shadow feels like a perfectly competent profile of a person for whom that isn’t necessarily a straightforward task.

Still, I came away from it frustrated at the way we fixate on the personalities and backstories of people accused of doing terrible things. Even if we acknowledge that essentially evil human beings do exist—the Epsteins and Hitlers of the world, whose drive to harm others seems so intense that it must be innate—then we move on to psychoanalyzing their enablers. Once you sift through the evidence, it’s easy to conclude, as many of Shearer’s subjects do, that some combination of avarice, romantic proclivities that run to the Oedipal and lessons in survival gleaned from a childhood under the influence of a cutthroat man has motivated Maxwell throughout her life. But so what?

There will always be amoral individuals. Speculating over what makes each one tick is an effective way of generating endless tabloid fodder, but it’s only useful insofar as it illuminates what needs to change on a systemic level in order to thwart their successors. In the case of Hitler’s accomplice Adolf Eichmann, a lead architect of the Holocaust, the philosopher and Holocaust survivor Hannah Arendt famously wrote that “he and the world he lived in had once been in perfect harmony.” Rather than being an extraordinarily malicious person, he was a “clown” living a genocidal lie fostered and perpetuated by a culture of willful self-deception.

With so much time spent fleshing out what Maxwell was like, and how she got that way, Epstein’s Shadow leaves questions about the societal and systemic factors in their alleged crimes hanging. Why did Epstein have so many powerful friends? Why did one alleged victim’s report to the FBI not only go nowhere, but also get back to Maxwell? Why was Epstein allowed to serve just 13 months, under absurdly luxurious conditions, after his 2008 conviction on serious charges such as procuring a minor for prostitution, while also shielding Maxwell from prosecution? Why does it appear to have been so easy for Maxwell to, as one subject put it, launder her reputation after her association with Epstein became public knowledge by founding a nonsensical, now-defunct conservationist charity and forging friendships with civic-minded celebrities?

The series’ most telling quote from Hervey isn’t about her ex-pal’s dirty mouth, but about why she continued associating with Maxwell for so long. “If one of my best friends went to jail, I wouldn’t just cut them off, like, right away,” she says in the final episode, visibly struggling to explain her loyalty. “I would want to, like, find out what happened. A lot of these things, you can’t really believe media and all of this, like, it’s hard to know who to believe.” It makes you wonder: Why do so many rich and powerful people tend to close ranks around predators in their midst rather than to trust the credible accounts of outsiders? And what have been the far-reaching consequences of that prejudice? Now that’s a documentary worth making. 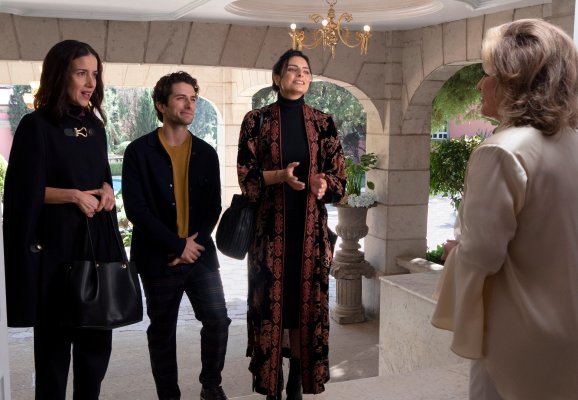 The House of Flowers Is Proof That Telenovelas Are Changing—and So Is the Way We Watch Them
Next Up: Editor's Pick