Why I Have Hope for Israel's Future

Ideas
By Assaf Gavron
Assaf Gavron is an Israeli writer, novelist, translator and musician. His novels include Almost Dead, Hydromania and The Hilltop

One Tuesday in May, my neighbor, Radwan, came to fit some shelves in my apartment. We chatted about what needed to be done, then I asked if he observed the Ramadan fast, or could I offer him a glass of water. “Oh no,” he said. He loves Ramadan, his favorite time of the year. He had eaten at 4:30am, before dawn, and would eat again at 7:30pm. Radwan lives on the top floor of my building in Tel Aviv, in an apartment he and his Palestinian friends are still building. He told me he was going back home later that week, to Hebron, to celebrate the Eid-el-Fitr festival that ends the month of Ramadan.

When my ten-year-old daughter came home that afternoon, I had to call Radwan for help. My daughter hated the position of the shelf, and her dad even more, for not following her precise instructions on where to place it. Radwan was just about to break his fast. He would fix it next week, we agreed, when he returned to Tel Aviv after the Eid weekend, and the Jewish festival of Shavuot. “Your holiday,” he called it.

That night the war began. Or rather, it arrived in Tel Aviv. The previous day, Hamas had fired rockets into the Jerusalem area. The day before that, there were riots at the Al-Aqsa mosque that left hundreds wounded. Two days before that, police had stopped buses of Muslims coming to celebrate the holiday from reaching Jerusalem. We can keep going backward through the days but the exact spark that started the recent conflict doesn’t matter. What matters is another round of death and bombing, rockets and air strikes, with a new, terrifying element: a spate of mob violence between Arabs and Jews in mixed Israeli cities.

Read more: Israel-Palestine is a State of Permanent Conflict. Only the Watching World Can Stop It

To me, it is impossible not to lay the blame for all this at the feet of one man: Prime Minister Benjamin Netanyahu. While he did not precisely orchestrate them, the incidents bear his fingerprints. It was a minister he appointed whose police led a violent and unnecessary crackdown at the mosque; it was he who chose to continue bombing for several days after the world pleaded for a ceasefire; it was he who stoked racism and hatred on the streets. His decade and a half in power has been marked from the beginning by incitement against Arab citizens and fomenting division within Israeli society.

Most of all, it was Netanyahu who gained from the suspended negotiations to form an alternative government which would not include him. Knowing the man well, we realize he would do anything to preserve his power, even if it meant taking the whole country down with him. It is hard to believe this level of cynicism, but how else can you account for a needless military operation that brought us to exactly the same torturous stalemate as before?

As I write, a few hours after the ceasefire, it’s hard to feel hopeful. The tentative peace is still fragile. The violence in Lod, Acre, Jaffa—cities where Jews and Arabs live side by side—was shocking and revolting.

Yet as the shock subsides, I am beginning to realize: ultimately, this won’t help Netanyahu. He is falling. He comes out of this round of violence weaker, because his promise of a secure and prosperous living for Israelis through the violent repression of Palestianians and Israeli Arabs has been proven hollow yet again. Although the possibility of anti-Netanyahu parties—including Arab politicians—uniting for a change in government is momentarily off the table, it will eventually come to pass. It may take a few more years, but the Netanyahu era will come to an end. Like his friend Donald Trump, he will discover that he can’t lie to everyone all the time and get away with it. He is smarter than Trump, so he’s gotten away with it for longer. But his time will come.

More importantly, the pandemic has accelerated the immersion of Israel’s Arab citizens into civil society, and made their legitimacy better understood. COVID-19 exposed how many of our doctors, nurses, pharmacists and other medical workers are Arabs. They were instrumental in our largely successful effort to fight the virus. Politically it has made them become stronger, giving them power and a voice they didn’t have before.

The violence that exploded over the past several weeks is partly a reaction to that, a step back after a step-and-a-half forward, powered by extremists on both sides. It was also a reminder of how much is broken between our battered tribes, especially for us Jews, who are far stronger militarily and economically, and far more responsible for the bloodshed and humiliation.

But I have hope that the integration of Israeli Arabs into Israeli society will continue, slowly and surely. After all, we rely on each other, in society at large, and in my own home. This weekend, I called Radwan. He was supposed to be back in town already, but he got stuck in Hebron as Israel banned Palestinians under the age of 45 from coming to work. “How do you feel?” I asked. “We’re OK,” he said. “Our village is fine. But this war is bad. I hope I can come next week. Please don’t touch the shelf, keep it hanging in the meantime. I will take care of it.” 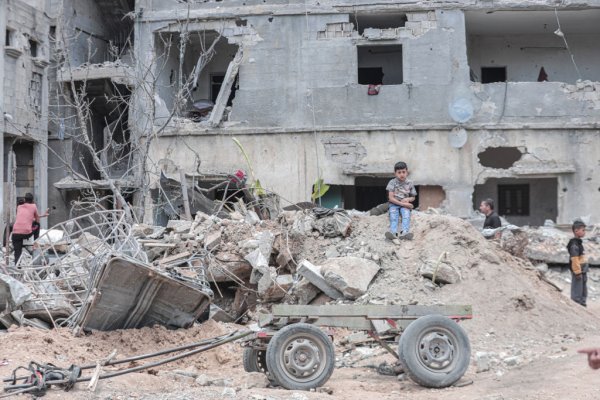 The Ceasefire Between Israel and Hamas Shows How Little Control Biden Has Over the Middle East
Next Up: Editor's Pick