Israel-Palestine is a State of Permanent Conflict Punctuated by Periodic Carnage. Only the Watching World Can Stop It

Ideas
By Mouin Rabbani
Rabbani, an independent researcher and analyst of the contemporary Middle East, is Co-Editor of the ezine Jadaliyya (www.jadaliyya.com)

While the timing of recent developments in Israel and the occupied Palestinian territories may have been unexpected, the events themselves were inevitable. This is because permanent conflict punctuated by periodic carnage is inscribed into the very DNA of the Israeli-Palestinian relationship as it has existed for nearly 75 years.

Israel is a Jewish state. In practice this means that the state, its institutions, and policies are designed to ensure the perpetuation of a Jewish majority, which is accorded superior rights and privileges relative to Israel’s Palestinian Muslim, Christian, and Druze citizens. Chief among these policies is the reservation of the lion’s share of land within Israel – very little of which is legally classified as private property that can be freely bought and sold – for collective Jewish ownership. Even without the depredations routinely meted out to Palestinian citizens of Israel, who constitute some twenty per cent of the population, the divergent status of the Jewish and Palestinian communities as a matter of state policy is sufficient to ensure permanent, mutual hostility between Palestinians and the state, and deepening antagonism between Israel’s constituent communities.

Since 1967 Israel has extended this framework to the occupied Palestinian territories, in a process known as “creeping annexation.” Its strategic objective is the permanent control of the maximum amount of land with the minimum number of Arabs. A half century of relentless land alienation and settlement expansion, with Palestinians increasingly concentrated in fragmented enclaves, has largely achieved this aim. Since 1993, the illusion of a peace process has furnished Israel with a diplomatic umbrella that enabled it to dramatically accelerate these policies. Neither peace nor co-existence ever stood a chance, with the Palestinian uprising of 2000-2005 in one form or another as foregone a conclusion as its various predecessors.

Israel’s project of territorial Judaization, and its consequences, have been in full view in recent weeks in the East Jerusalem neighborhood of Shaikh Jarrah. The criticism that Israel is needlessly provoking the Palestinians, and that its judiciary and security forces are aiding and abetting extremist settlers, misses the more pertinent reality that territorial Judaization is the raison d’etre of Israel’s occupation of the city, settlement the primary tool, and its facilitation central to the mission. The recent events in Shaikh Jarrah, in which Israel applies its domestic legislation to Palestinian territory in defiance of international law to further this project, has been repeated dozens of times over the years. Palestinians have consistently fought back with every means at their disposal, only to be overwhelmed again and again.

One of the most visible consequences of the Oslo process that started in the mid-90s, and one Israel has actively encouraged, has been Palestinian fragmentation, which goes well beyond the Fatah-Hamas schism. Put simply: Palestinian Authority (PA) President Mahmoud Abbas has little to no interest in resuming governance of the Gaza Strip, Hamas seems increasingly content to do nothing else, and the political influence of Palestinian communities in exile in national decision-making has declined to virtual insignificance.

Within East Jerusalem, which Israel has effectively isolated from the rest of the occupied territories, Palestinian citizens of Israel have played an increasingly prominent role in defense of its Arab character and its Muslim holy sites, and they helped lead recent opposition to the expansion of Israel’s settlement in Shaikh Jarrah and assault on the Haram Al-Sharif, the exalted plaza atop the Old City that contains Al Aqsa mosque, one of the most venerated sites in Islam. Jerusalem’s powerful and multi-dimensional symbolism, without which there can be no Palestinian self-determination of any sort, make appeals for its salvation one of the few issues that remain capable of mobilizing the fragmented Palestinians on a national basis, even as their national movement disintegrates.

Israeli security forces arrest a man during a demonstration against the planned eviction process for the Palestinians in the Sheikh Jarrah neighbourhood of Jerusalem, on May 7, 2021.
Ilia Yefimovich—picture alliance/Getty Images

For Palestinian citizens of Israel, Shaikh Jarrah was thus not just something Israel is doing to their compatriots in the occupied territories, but also represents all that is wrong about their own situation in Israel. This is why they not only came to Jerusalem, but also began demonstrating against Israel and its policies in their own cities and villages.

In the occupied territories, both Abbas and Hamas are confronting serious crises of legitimacy, and hoped to address this with new legislative and presidential elections that had been called for May and July of this year, respectively. But when Abbas was confronted with more serious electoral challenges than he anticipated, he used Israel’s refusal to allow balloting in East Jerusalem as a pretext to cancel the poll rather than mobilize his people in defense of their rights.

With the PA largely AWOL during the recent events, yet working hard behind the scenes to keep a lid on West Bank unrest, Hamas saw an opportunity to demonstrate that it aspires to more than perpetuating its provincial government. For the first time since it seized power in the Gaza Strip in 2007, it has confronted Israel over issues that originated outside the territory. That said Israel’s punishing decade-and-a-half blockade of the coastal territory, which exhibits many of the characteristics of a siege and has kept nearly two million Gazans on the verge of starvation with their access to basic goods strictly controlled, must always be factored into the context. The Palestinian Islamists saw an opportunity to demonstrate their national credentials, and improve them at Fatah’s expense, and grabbed it with all the hands at their disposal.

For his part Israeli Prime Minister Binyamin Netanyahu severely miscalculated by failing to recognize that while the Palestinians are down they are not yet out. Once the crisis his policies provoked spun out of control, he sought to use it to bolster his prospects to remain in office and put a lid on corruption trials that may send him to prison. First by posing as the paragon of Israeli security, then by sufficiently polarizing Israeli society to sabotage coalition negotiations being undertaken by his various rivals.

Yet in the larger scheme of things, apportioning responsibility for this latest conflagration, and understanding how and why it erupted, misses a more germane point. It is that the Israeli-Palestinian relationship in its present form cannot exist other than in conflict, and that Israel is too powerful, and the Palestinians too weak, to transform it into one of peaceful co-existence.

One option to resolve this deadlock is for the international community, and the United States and Europe in particular, to impose an end to the occupation and facilitate the two-state settlement they claim to endorse. Yet in light of their vested interests, and with an arsenal limited to vapid statements, this seems out of the question.

Absent international political will (and there is every indication it is and will remain absent) the status quo of permanent conflict punctuated by periodic escalation and carnage will persist until there is a fundamental change in the balance of power that either results in Palestinian capitulation or fundamentally transforms Israel. Neither scenario appears likely within the visible horizon. 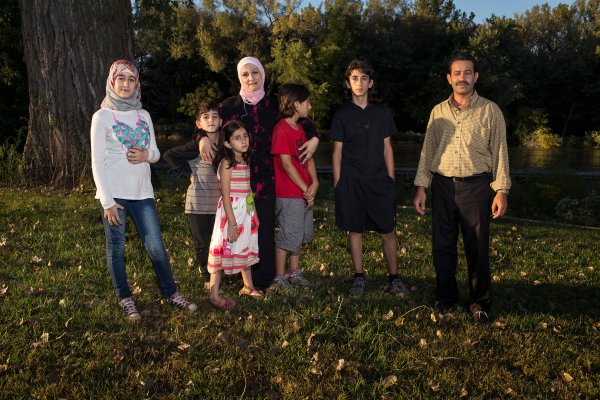 Biden Must Rebuild the U.S. Refugee Resettlement Program
Next Up: Editor's Pick